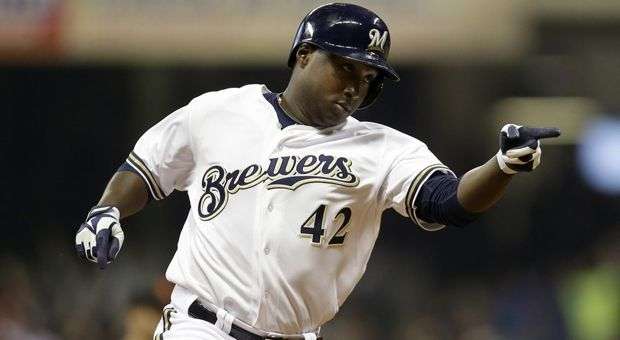 A brief break in the majors, just four days, was enough for the baseball player Yuniesky Betancourt to be encouraged to cross the Straits of Florida destination Cuba, to resolve personal issues.

That’s what OnCuba learned, and contacted the player-born in Villa Clara, on arrival to the island on Monday, when he said he would not grant any interviews during his short stay.

‘Riquimbili’ as he is popularly known in the baseball world, took advantage of the break for the All Stars in the United States, held since Monday in the Citi Field stadium in New York, and requested permission from his team, the Brewers Milwaukee, for a quick trip to his homeland and rejoin the franchise on Friday, when action resumes in the Majors.

Betancourt, who escaped from Cuba on November 28, 2003, isn’t the first Cuban player based in the U.S. to return to his country, since others such as José Ariel Contreras and Rey Ordonez had traveled to the island after the expansion of immigration policy in October 2012, when the Cuban government announced the possibility of temporary return of thousands of illegal immigrants, professionals, doctors, artists and high performance athletes who fled the country since 1994.

Betancourt was a starter on Sunday in the 5-1 victory over Arizona Diamondbacks, a match in which was hitless four times and his batting average dropped to 198.

Despite his poor figures and the constant criticism for his hasty philosophy at the home plate, Betancourt is immovable in the lineup of the Brewers, with whom he has played 85 of 93 games of the season, in which he crossed the 1000-hit mark this year after nine seasons in the big leagues, where he had played for the Seattle Mariners (2005 to 2008), Kansas City Royals (2009, 2010 and 2012) and Milwaukee Brewers (2011 and 2013).

The reasons for the presence in the roster lies in its versatility and usefulness, chief virtues of a man who has worked in five positions during the current year, including first base, completely unknown territory in his time in the majors, where he has played 951 games at shortstop, 57 at second base, 46 at third and two in the left field, in addition to the 43 games in first base this season.

Recognized primarily for his defense, ‘Riquimbili’ has survived nine seasons in American baseball, making him the most experience active Cuban in the MLB.

HISTORY OF A SCAPE

For Yuniesky Betancourt to return to Cuba has a tremendous emotional burden. Here, he told in an interview to the website of Major League Baseball, he remembers the day he did not play baseball.

“I did it everywhere, the streets, parks, with friends. Wherever. I played all the time, “he said shortly after starting his adventure in the big leagues.

Here, too, he left Maura and Mary, his mother and his grandmother, who raised him and supported him and advised always, even from the distance.

“My mother always encouraged me to do the best and to use what God gave me. She always told me to follow my dreams, “he confessed.

And he listened. He tried to fulfill his desires, first in Cuba, where he shone as a shortstop in youth national teams and then in the second base with the Villa Clara team, where he didn’t have the opportunity to play shortstop for the presence of stellar Eduardo Paret, for whom he had great admiration.

But on second base coaches did not see him. They just ignored him, kept him out of the main teams and one day he got tired, overwhelmed by impatience and frustration.

During a dark morning of November 28, 2003, without telling anyone, Yuniesky departed on a raft heading north along with nine people, including the also baseball players Zaidel Beltran. The dangerous journey took them to Mexico, with previous and unexpected stop in a remote island due to the strength of the waves.

After four days, ‘Riquimbili’ arrived in Cancun and later worked with the team of Culiacan in the Mexican League, until scouts from Atlanta Braves, Chicago Cubs, Los Angeles Dodgers, Seattle Mariners, the New York Mets and Boston Red Sox came for individual tryouts, in which he did his job, which earned him to sign a contract for 3.65 million dollars with the Mariners on January 26, 2005.

Since then he has continued the effort, perennial intend to get better every day in order to consolidate himself in the best baseball in the world, not an easy feat for a foreign ballplayer.

In this regard, he said a few years ago that “everyone has the goal to improve, to get to the top and be the best. In Cuba, one comes to a point and cannot go any higher. You can be at the same level for years and be comfortable. One does not use everything because maybe you do not need it. You can play with just 80 percent of your ability and do well. In the United States there are no limits to how much one can improve because the best players in the world are here. ”

Down to earth he worked to death with his friend José Ariel Contreras with the mind focused on fulfilling their dreams professionally and to be back to be near his family.

In 2006 he said: “You can do anything in life if you do not try. If you do not follow what is in your heart, you have not met it. Part of my goal has been met. I helped my family and now I want to see them again. Maybe not today or tomorrow, but maybe in the future. ”

That future is now.

Jean Nouvel: "Havana has a personality"

Marina Ochoa: "The Cuban cinema does not need paternalism"