While Cuba is Maduro's main ally in the region, Canada, which has maintained strong economic and political ties with Havana for decades, is one of Guaidó's main supporters. 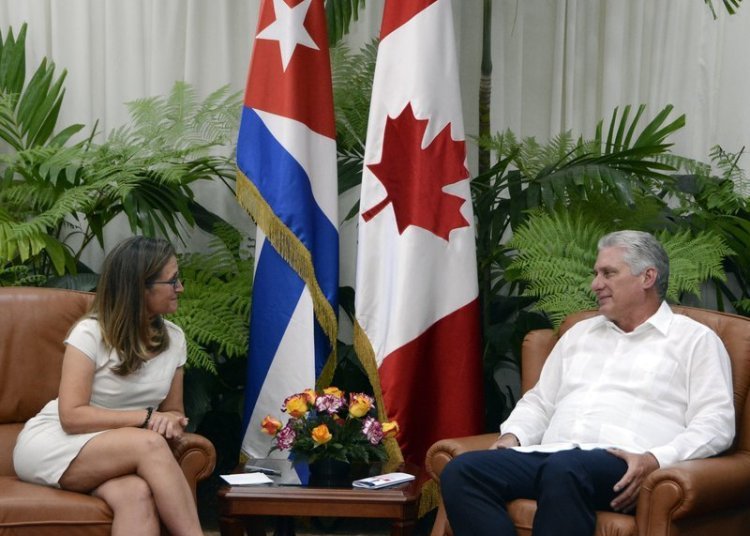 Cuba and Canada agreed to continue with contacts at the highest level to “exchange views” on the situation in Venezuela after the visit made this Wednesday to Havana by Canadian Foreign Minister Chrystia Freeland.

Freeland met in Havana with Cuban President Miguel Díaz-Canel, who “reiterated his country’s solidarity with the government of Nicolás Maduro” and recognized Ottawa’s position on the United States’ application of the Helms-Burton Act.

She also previously met with her Cuban counterpart, Bruno Rodríguez, a meeting in which, according to the Canadian Ministry of Foreign Affairs, the two ministers addressed the crisis in Venezuela and referred to the ongoing “Norwegian process.”

Norway is directly mediating between the government of Nicolás Maduro and the opposition, led by Juan Guaidó, whom Canada, the United States and another 50 countries consider is the legitimate president of Venezuela.

Freeland and Rodríguez also pointed out “their different perspectives on the crisis in Venezuela and expressed hope that a way forward can be found,” Canadian authorities said.

The two diplomatic officials agreed “that senior officials stay in touch and continue exchanging views that are as useful as possible.”

The meeting is the third that Freeland and Rodríguez have held since last May and the second that takes place in Cuba.

While Cuba is Maduro’s main ally in the region, Canada, which has maintained strong economic and political ties with Havana for decades, is one of Guaidó’s main supporters.

In recent months Canada has been involved in a growing diplomatic activity around the Venezuelan crisis.

In addition to contacts with senior Cuban officials, Canada is holding talks with the European Union (EU), which does not recognize Guaidó as interim president despite the fact that most of its members do, and especially with the United States.

At the beginning of August, the U.S. special envoy for Venezuela, Elliott Abrams, traveled to Ottawa, although the trip was not revealed by the Canadian authorities.

Abrams said that Canada and the United States are working to bring the EU closer to the positions of the two North American countries, something that has not been denied by the Canadian government.

Elliott Abrams also showed his distrust of the productivity of Canada’s talks with Cuba.

In what can be considered an answer to Abrams’ skepticism, Freeland said on Twitter that the talks she had with Rodríguez this Wednesday were “useful” and dealt with “the ties between Canada and Cuba, the crisis in Venezuela and support for Canadian businesses operating in Cuba.”

At the meeting, Freeland and Rodríguez also addressed the activation of Title III of the U.S. Helms-Burton Act, which punishes foreign companies operating in Cuba.

In this regard, Canada reaffirmed to Cuba its decision to maintain the Foreign Extraterritorial Measures Act (FEMA), a 1996 law that protects the interests of Canadians and prevents recognition or enforcement of judicial decisions in Canada as a result of the Helms-Burton Act.

According to the Canadian Ministry of Foreign Affairs, Ottawa “will fully defend the interests of Canadians who carry out legitimate trade and investments with Cuba.”