In the agreement, the Ecuadorian authorities claimed economic reasons to conclude and not renew the agreements that were in force since 2009, according to the note from the island’s Ministry of Public Health. 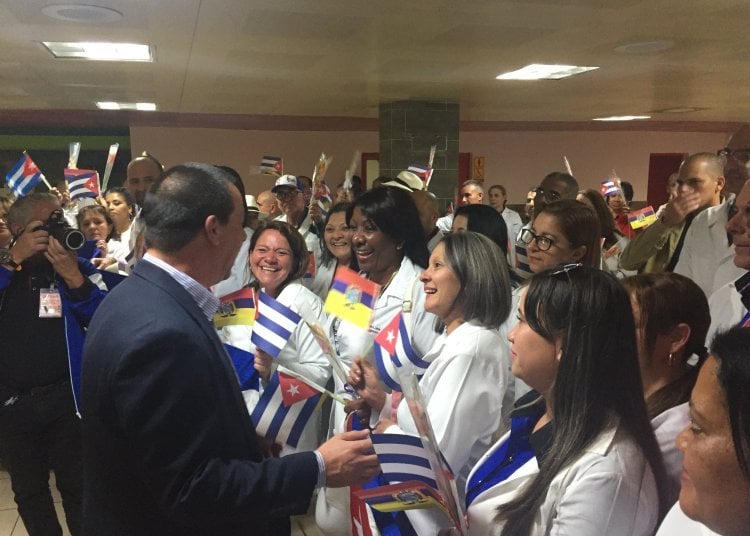 Cuban Minister of Public Health José Ángel Portal receives a group of Cuban doctors who worked in Ecuador, after the closing of the collaboration agreements between the two countries. Photo: @MINSAPCuba / Twitter.

The governments of Cuba and Ecuador signed an agreement that definitively terminates six specific professional services agreements in the scientific and technical assistance areas between the two countries, the island’s Ministry of Public Health (MINSAP) reported this Wednesday.

A total of 382 Cuban health professionals working in 23 of the 24 provinces of Ecuador returned to Cuba this week, after the government of President Lenín Moreno announced on November 12 the end of the health agreements and that the island’s doctors would be replaced by locals.

In the agreement, the Ecuadorian authorities alleged economic reasons to conclude and not renew the agreements that were in force since 2009, according to the MINSAP note, which does not specify the date and place of the signing of the document.

Ecuadorian media had previously reported that the government of Quito had ended the agreements after verifying that during the riots of early October in Ecuador there had been an unusual flow of foreigners in the country with official Cuban passports.

The Havana government considered that information “false” and affirmed that the Cuban doctors “strictly” performed the functions entrusted to them by the health system of Ecuador in “rigorous” compliance with the signed agreements.

Results of the agreements

MINSAP said that in the signed agreement, Cuba and Ecuador recognized the results in compliance with the agreements in the specialties of epidemiology, transplants, physiotherapy and rehabilitation, imaging and radiology, ophthalmology and angiology.

It also alleged that Cuba reported its interest to the Ecuadorian health authorities that the required follow-up of the patients cared for by the Cuban medical mission be guaranteed.

The Cuban medical services in Ecuador began in 1992 and were consolidated in 2009 with the signing of a Framework Cooperation Agreement on health during Ecuadorian President Rafael Correa’s visit to Cuba.

The Cuban health authorities stressed that in 27 years of providing services, 6.8 million consultations and 183,000 ophthalmological operations were carried out, which had a positive impact on the Ecuadorian population.

The figures published this Wednesday also indicate that to date a total of 3,565 health professionals from the island have worked in Ecuador, who have performed 212,360 surgeries, 3,548 deliveries and have applied 100,084 vaccine doses.

Added to this are the results of the so-called Manuela Espejo Solidarity Mission, which was responsible for a psychosocial, pedagogical and clinical-genetic study of people with disabilities.

According to these data, based on that investigation 825,576 people were treated, 35,257 of them by specialists in neurophysiology and otolaryngology and 21,062 patients underwent clinical genetic studies.

The Cuban authorities also recalled that it helped Ecuador in situations of natural disasters, such as the heavy rains that hit that country in 1986, then in 2001 due to a dengue epidemic, and in the care of the victims of the earthquake in Manabí, on April 16, 2016.

The departure of the Cuban doctors from Ecuador is added to the withdrawal decided by Cuba―for security reasons―of the 725 health professionals that it maintained in Bolivia, based on the violent unrest that occurred in that Andean country after the resignation of Evo Morales to his position of president and his subsequent exile in Mexico.

The last group of 228 Cuban doctors who were on a health mission in Bolivia returned to the island yesterday, MINSAP and Foreign Minister Bruno Rodríguez reported on Twitter, who met them at Havana’s José Martí International Airport.

It has also been a year since the cancellation due to political differences of the More Doctors Program between Cuba and Brazil, which led to the departure of more than 8,000 Cuban doctors from that country.

The export of goods and services is one of Cuba’s main sources of income, which in 2017―the last year for which official statistics are available―reached a value at current prices of over 14 billion dollars, of which exports of goods represented only 2.402 billion and the income for services 11.681 billion dollars.