A first group of 173 collaborators arrived this Tuesday, and the arrival of a second plane was expected. 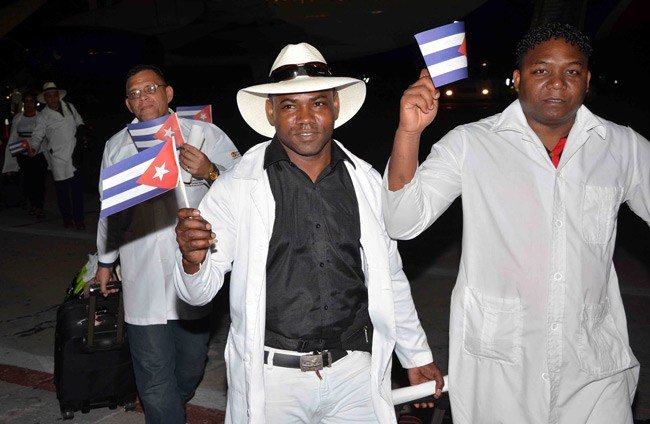 A first group of 173 Cuban doctors returned to the island this Tuesday from Ecuador, days after the government of that country ended the agreements it had with Cuba in the face of the alleged participation of Havana in the protests of early October in the South American country.

The doctors arrived yesterday in the early morning at the airport of Santiago de Cuba, in eastern Cuba, where a part of them disembarked, and then the plane resumed its route to Havana, where the rest of the professionals on board got off.

Another plane with 183 professionals was scheduled to land yesterday afternoon in Santiago, coming from Ecuador, where 382 Cuban doctors worked and will now be replaced by local specialists, according to the Ecuadorian government.

“We are aware that the end of the agreements with Cuba’s medical mission will have a negative impact on the health services of the Ecuadorian people, but unfortunately (Lenín) Moreno, their president who betrayed the principles of socialism, seems not to worry about this,” said ophthalmologist Nivardo Rodríguez.

Rodríguez told the state-run Agencia Cubana de Noticias (ACN) news agency how he operated from 12 to 13 patients daily even in the midst of clashes between the government and indigenous groups last month.

For his part, Raúl Carballosa, a doctor from Santiago, said that “President Moreno’s offensive words against us are far from the feelings of the people of that nation who saw us off with sadness but grateful.”

Last Tuesday, November 12, Ecuadorian Minister of Interior María Paula Romo announced that her government had terminated and would not renew the six bilateral agreements with Cuba in the area of ​​health.

Quito decided to end the collaboration agreements with the island after verifying that during the riots in early October there was an unusual flow of foreigners in the country with an official Cuban passport, according to the Ecuadorian media.

“At all times, Cuban professionals have strictly adhered to performing the functions entrusted to them by the Ecuadorian health system in strict compliance with the agreements signed,” said the Cuban Ministry of Public Health (MINSAP).

In addition, Havana blamed the U.S. government for trying to “discredit and sabotage the international cooperation that Cuba provides in dozens of countries in the area of ​​health.”

The Cuban medical cooperation in Ecuador began in 1992 and was consolidated in 2009 with the signing of a Framework Cooperation Agreement related to health during the visit to Cuba of former Ecuadorian President Rafael Correa.

Since the beginning of this collaboration, some 3,565 Cuban health professionals have worked in Ecuador, carrying out more than 6.7 million medical consultations, 212,360 surgeries and applying 100,840 vaccine doses, according to official data.

For Cuba, international medical cooperation is one of the pillars of its foreign policy and the export of professional services―mainly education and health―is the island’s second source of income.