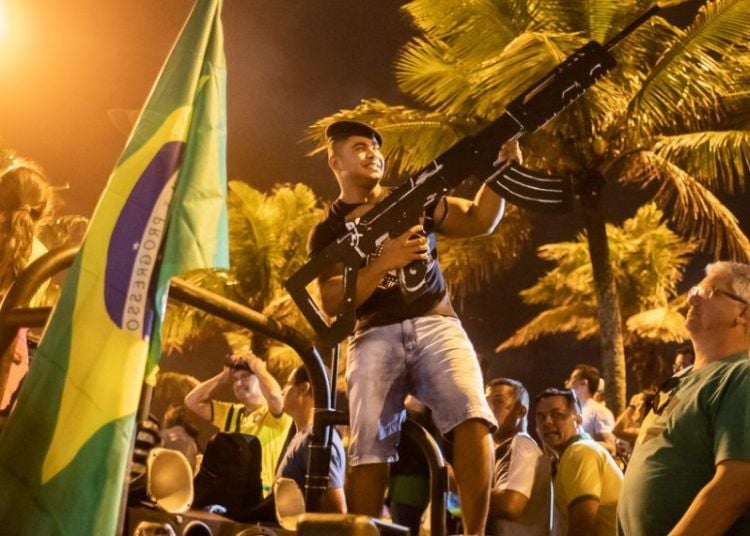 I like to believe that reality has a fiction structure. It’s not an intellectual tranquilizer, it’s an aesthetic recourse. Thus, for example, I allow myself to think of a country as a theater, its history as a novel or its landscapes as stage sets. If the nations are dramas, then there is no doubt that this Sunday will be a chapter always cited in Brazil’s national biography.

In free and democratic elections – except for Lula’s proscription, a minor detail – the Latin American giant elected a candidate who wears, according to his taste and pleasure, the clothes of the bad guy.

It will take us a long time to understand how, when and why and by whom the ultra-right character of Jair Bolsonaro, of the Liberal Social Party (PSL), was created and polished. Therefore, with the modesty of the immediacy, I share photos that allow us to understand a new tragedy of the Latin American loss of direction.

On voting day in Rio de Janeiro it was not easy to find a group of voters for Fernando Haddad, candidate of the Workers Party (PT). Attacks, paralysis because of fear and pessimism in the horizon are some of the causes. And even more in this city, the laboratory where what now reigns on a national level was created. It should be remembered that Bolsonaro’s political career was born in the cidade maravilhosa – 68 percent of the city’s citizens voted -, governed today by Marcelo Crivella, the cousin of Edir Macedo, lord and master of the evangelical empire of the Universal Church of the Reign of God; the same city where the military have already been governing since early this year, when its intervention “in the security” of the state was decreed.

Here, in Rio de Janeiro, the antechamber of the national event, it seems easier to find a person disenchanted with the samba than a red gathering of the Workers Party. However, walking along the cobbled-stoned streets smelling of fair, there is Sergio. He flutters a Haddad flag, wears a T-shirt of singer-songwriter Emicida and shows off a sticker of “ele nao.” I ask him and he answers while he adjusts his cineclub glasses, those that have a bigger frame than lenses.

Friend, everything is sheer madness. How can there be people who vote for a guy who vindicates the dictatorship, defends torture? Haddad is at the front, a university professor, I know that the PT has done a lot of shitty things, a lot, but compared to that fascist? It’s necessary to have faith, we’re going to revert this, the Brazilian people has to wake up and remember everything that Lula achieved and everything we can lose with Bolsonaro.

Sergio the friend incarnates the noble voluntarism and strategic shortsightedness the left has had during the entire campaign. Anchored in the nostalgia of a past, they have forgotten the dissatisfaction of the present and the hope for the future. A double sin in a country of times without a yesterday. In Brazil, with sights set only on the future, the rear-view mirrors aren’t even good to drive.

The left also confused the voter with the candidate. Representativeness is not mimesis. Bolsonaro is fascist, but not necessarily all those who voted for him. This comparison only insults the person who hopefully will be persuaded. Some still repeat that the “bolsominion” are all men, white, rich and anabolic addicts. They run the great risk of not making a difference between hamlet and world.

In addition, there’s the “ele não” sticker. During the first round it made sense: saying no to the undesirable. In the balloting it was useless: subtracting from the others is not the same as adding to one’s own. Finally, that intellectual miserableness of the Latin American left; that vice that is like the Andes, from Argentina’s Patagonia to Colombia’s Caribbean.

There’s nothing in a university professor that guarantees he will do a good job. And less in Brazil: Google Fernando Henrique Cardoso. And a cherry for dessert: in the last days an anti-Bolsonaro campaign became viral, inviting voters to be photographed holding books. That wasn’t even enough for Borges.

I’m not saying that Bolsonaro won because of those mistakes. Bolsonaro triumphed before the very captain was born. The roots of his victory are in the more than late abolition of slavery; in the law that legalized different elevators for whites and blacks; in each minute of the 21 years of the civic-military dictatorship that was never tried; in the structural inequality; in the daily “slaveocracy”; in Lula’s imprisonment; and the list goes on. The left’s mistakes revitalized the irreversible. And to “return” it has combat the worst of its vices: anachronism.

I’m in Barra da Tijuca, the powerful west of Rio de Janeiro. I walk toward the home of the future president of Brazil. There, “in the captain’s general headquarters,” his voters congregate. There is a parade of cars that compete in eccentricities. A green-yellow Volkswagen with the number 17 in front, Bolsonaro’s electoral number, catches my eye. It has a plasma screen TV set stuck to the roof showing ostentatious funk video clips: rifles, muscles and gold for the men. For the women, asses in movement drawing all the imaginable geometric figures. The sound that comes out of the trunk doesn’t coincide with that of the TV set. In saturated loudspeakers the best-known song of the film Tropa de élite is heard. The homage to Captain Nascimento gets mixed up with Bolsonaro’s redemption.

I enter a bar to use the restroom. When I’m coming out I bump into a man whose body is an ode to the gym. More curious than his muscles, veins and tattoos is the line of persons waiting for a selfie with him. He is wearing a black T-shirt that on the front says “Bolsonaro” and on the back has a very unorthodox 17: the “1” is a rifle. That body molded by force of the force has a name: it’s Alexandre Frota, Sao Paulo federal deputy for the Liberal Social Party (PSL).

The vigil in Bolsonaro’s home is a carnival. People jump, sing and embrace each other. A fat man, who has a double chin that also dances, buys more than 20 beers and gives them away in God’s name. The chaos of the street isn’t an invitation to dialogue, but it is to questions as short as their answers.

There’s a woman who insists on speaking in Spanish with me. I ask her what she thinks about Bolsonaro’s sexist and misogynist sayings. She answers with a slogan: “Bolsonaro is not sexist, he’s a macho.” Frota’s virility comes to my mind.

While I continue walking I meet a mom, a dad and their son. The three of them are black and from the northeast. Impossible to not question them. They speak to me about the need for change, of how ridiculous it would be to vote for the party that “burnt Brazil”; they speak to me about God, the family, the “gender ideology” and Venezuela. Always Venezuela. Bolsonaro’s promised land will never be able to be understood without his inverted mirror: the Venezuelan nightmare.

At 21 hours, in Barra da Tijuca, the fantasized has a number. The final count establishes Jair Bolsonaro as Brazil’s new president. The festivities go from the sky to the pavement and from the street to the clouds. Fireworks go off, which the voters simulate as loud gunshots. The rifle that symbolizes the captain’s campaign is imitated among his voters. In that same sky, with a smell of gunpowder, a helicopter of the military police overflies with the Brazilian flag. The people reply with ovation and devotion. An aura of heroism illuminates the faces of an empowered security forces.

My relativism and tolerance are showing their limits in the face of an exalted boy who screams in my ear: “Death to the PT and to Lula!” I feel things in my stomach.

When I started writing these lines I was paralyzed by the blank page syndrome. I couldn’t, I didn’t want, I didn’t feel or wasn’t encouraged to write. My therapy was simple: listen to music. I went to the classics and found the song “O que será? (À flor da terra),” composed by Chico Buarque and sung in a duo with Milton Nascimento. A beautiful song created in 1976 for the film “Dola Flor y sus dos maridos,” based on Jorge Amado’s book by the same name. Chico Buarque himself has recognized another two sources of inspiration: the photos of Fernando Morais in Cuba and the dictatorial context that reigned in Brazil in the late 1970s.

Chico’s question resounds in any of Brazil’s bars, homes or schools. The uncertainty over the government of Bolsonaro is generalized. There are doubts regarding the limits, also about his genesis. It’s not known whether an election on democracy was lost or democracy was lost in an election. The captain is a symptom, but a symptom of what? A dictatorial revival? A “new” right as democratic as society allows? A neo-authoritarianism? Brazil has too many questions about a foggy past, a decadent present and an uncertain future. Skeptical in the face of the answers and pessimistic from readings, I only cling to a travestied belief of suggestion: listen to Chico Buarque. Nothing is as politicized in Brazil than its popular culture.

*The elite troop is here, a hard nut to crack.

Catch, catch everyone, and it’s also going to catch you.