The order appears to be an attempt not to increase the concern over a pandemic that is severe, has no cure in sight, and may lead parents not to send their children to school against the efforts of the White House and the state governor. 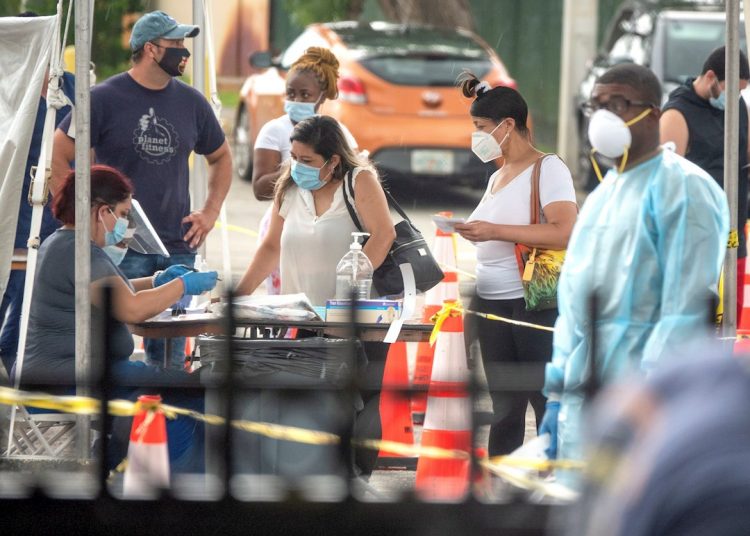 A group of people line for the COVID-19 test carried out by the Florida National Guard in North Miami. Photo: CRISTOBAL HERRERA/EFE.

Employees of the Broward County Education District, bordering Miami-Dade, have been given strict orders not to speak to anyone about the impact of COVID-19 on the system, be they teachers, students, or administrative workers.

This Monday, District Chief Security Officer Brian Katz sent out a memo called “Employee Confidentiality and COVID-19,” instructing them to “respect the medical rights of other employees and not reveal who may be contaminated with the pandemic.”

“As district representatives, employees must also refrain from disclosing their own situation, both at their workplace and on social media,” the document said.

The reaction of the teachers and the union was immediate. They consider this to be a violation of workers’ rights. “It’s very difficult to understand. If I can tell anyone that I am diabetic or have a cold, why should I not tell others that I am contaminated with the coronavirus?” asked Sonja Lacourciere, a teacher at Forest Hills Elementary, in the city of Coral Springs. “After all, the school district cannot control my First Amendment rights [that guarantee freedom of expression] just because I work for them.”

Anna Fusco, president of the Broward Teachers Union, told the local Fox network affiliate: “if an employee does not tell anyone, he may die because he will have no one to help him. It’s an absurd order, because it’s careless and incorrect.”

The memorandum’s order is so absurd that even within the school system there is no consensus on the matter, and the decision is unclear. District communications director Kathy Koch told Fox that the text does not specifically tell employees not to inform friends or post it on social media, but rather that “it’s not expected that they do so.” However, “they are expected to inform the school district if they test positive.”

“The intention of the note is for people to keep their health private. If someone wants to share their state of health it is a personal matter and should not do so as a representative of the district,” says Katz. In other words, the school district doesn’t seem to want details of the health status of its employees to be known so that the public doesn’t have the notion that by disclosing them they are speaking on behalf of the Broward school district.

According to Brian Swider, an assistant management professor at the University of Florida, the underlying reason would be to prevent employees from using their case to “make derogatory comments about their illness and about their employer. However, since there is no government policy prohibiting it, employees should be able to disclose details of their state of health. Could it be they can’t tell their family and friends? It’s stupid. How is this different from someone with cancer?” Swider said.

Lawyer Cynthia Barnett Hibnick, with offices in Miami and a specialist in medical affairs, speculates that one of the reasons for the memorandum’s existence would be that the pandemic is a frightening disease, highly contagious and with no cure in sight. “I think they are requesting that their employees not go to social media to reveal this because they don’t want to create panic throughout the school district. I imagine they don’t want the rollback,” ventured the Sun Sentinel newspaper.

There would also be another, more compelling reason. The White House is currently pressing hard on Florida Governor Ron DeSantis to reopen schools in the first week of August. But Miami-Dade County Superintendent Alberto Carvalho has opposed it, and his opinion is highly influential among his colleagues.

It’s unclear how many cases of coronavirus there are in Broward. Two weeks ago, Superintendent Robert Runcie informed the School Board that 107 cases between employees and contractors were documented. Since then, his office has not responded to multiple requests to update those figures. According to the Florida Department of Health, 51,657 coronavirus cases have been recorded in Broward, as well as 607 deaths, since they began counting last March. The average growth rate of the pandemic in that county ranges from 8,500 to 12,000 cases.

Despite everything, lawyer Barnett Hibnick doubts that Katz’s memo is legal. He says that employees “should refrain” from sharing their health as an obligation, not that they “should” as a suggestion. “It is enough to end up in court,” he stressed.

The note admits only one exception: District administrative officials must be informed of the possible contagion in order to process the medical leave and ensure that the school in question is decontaminated.

Coronavirus in Cuba: new infections increase to 33, 11 of them don’t exceed 20 years