In Miami-Dade County, where Trumpism ended the gentlemen’s agreement to hold elections without partisanship, politics would return to normal. 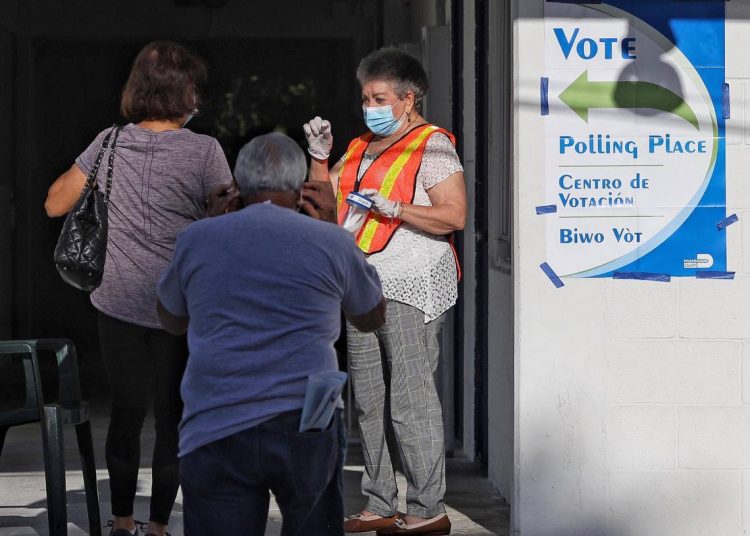 Voters flock to a polling station in the Florida primary. Photo: EFE/Archive

These almost four years of Donald Trump administration have profoundly changed the way of doing politics in the United States. This has been most palpable in this week’s primary in Miami-Dade County.

In a largely Democratic county, Republicans had always stayed in their hunting grounds, courting the loyal Republican vote, moving across the Cuban community, and convinced that controlling those three major districts was enough to stay afloat. This was so because those three districts, mostly Cuban-American, were enough to control some seats in the federal Congress and Senate, the state legislature, and political positions in mayoralties, municipal councils, and other elected positions, such as the housing appraiser and judges.

In that status quo that was maintained for decades, there was a gentlemen’s agreement: that the elections for the mayor of Miami-Dade should not have a partisan tinge. The candidates were more focused on the real needs of the electorate and presented themselves with a collective program that would please the majority, regardless of their political color.

But things started changing three electoral cycles ago, when the Democrats were gaining space in the Republican areas, especially in the presidential elections, which are usually the most popular. All Democratic candidates for the White House have won elections in Miami-Dade for the past 20 years. Before that too—in fact, the last Republican to win in South Florida was Dwight Eisenhower in the late 1950s—, albeit with less intensity.

An emblematic case was that of Bill Clinton (in the 1992 elections), the first Democrat to win the presidency with the Cuban Miami vote due to the support of the then powerful Cuban-American National Foundation and its leader, Jorge Mas Canosa. Mas Canosa was a man of enormous political flair, who turned his back on the Republicans after eight years of being at the beck and call of Ronald Reagan. In fact, the Bush family never forgave him because, when then-President George H.W. Bush tried to be elected, Clinton appeared ahead with the support of Mas Canosa, disrupting his plans. When his son George W. Bush was elected president in 2000, he cut off Cuban Republicans from the White House. At least that was the end for the Foundation people. But even so, the Cuban electorate was solidly Republican.

President Donald Trump instituted another way of doing politics. He introduced the confrontation between factions and hatred among voters. Some in South Florida heeded the call: Anyone who did not follow was a “socialist.” Overnight, the Democrats became “communists.”

Republicans had their first inkling that things were changing. With the president in power, two years ago, Miami-Dade County lost two-thirds of the congresspeople they had in Washington. They were left with one who, even so, lost 15% of his usual electorate.

In South Florida this decline was never as visible as last Tuesday in the primary. The confrontation and division promoted by the president led to political campaigns to retreat from the usual scenario of promoting ideas and programs and to focus more on personal attacks on Democratic candidates with Joe Biden at the helm, suddenly labeled “communist,” “Socialist” and all possible ists.

This would have gone unnoticed if the majority of the votes in the primaries and the final elected offices had not fallen into the hands of Anglo candidates. They are less conservative than Hispanics, particularly Cubans. The conviction took hold that South Florida was changing, perhaps with little or no chance of going back.

In the most important election, that of the Miami-Dade mayoralty, Republican Esteban Bovo, who outnumbered his Democratic contender by 0.40%, came forward saying he was “the only conservative supported by Trump” with the aim of removing from the “county socialism and communism.” The president never supported Bovo. In fact, they have only seen each other three times when Bovo met Trump at the airport.

This Wednesday, in an interview with a local newspaper (partially disclosed, which was published in full on Saturday) Bovo again insisted that his conservatism, between now and November, will be more intense. This assertion has two implications: either the county councilor still doesn’t take into account that four years ago candidate Hillary Clinton won in Miami by a large difference with Trump, or he has not realized that the narrow difference with which he beat Democrat Daniella Devine Cava means that many Republicans voted for her.

Bovo is not a particularly skilled politician in the art of negotiation. His basic interests are Cuba and what he has called “republican thought,” something that is not very clear what it consists of. The Cuban-American conservative electorate and other Latin Americans—like the Venezuelans—are easily convinced by just telling them that one is a Republican, without much explanation.

What is clear is that Bovo has widely bet on Trump’s reelection. This is, deep down, the ocean where he can survive and promote division among citizens, even with verbal violence, so that no one knows his true intentions.

The primaries have been a reaffirmation that an element is forming in South Florida that in four years of “Trumpism” has prompted the conclusion that the status quo must be end and a return to the normal. The elections are to address reality and not to distort collective thinking. When Democrats and Republicans decided that Miami-Dade County’s electoral process should focus on issues rather than differences of thought, the area was not in bad shape. “We used to argue, but we collaborated,” a dozen political analysts admitted to OnCuba this Thursday. “Now we’re fighting.”

An environment that could be coming to an end, aggravated by the way the White House does politics. The non-reelection of Donald Trump will orphan politicians like Bovo. If the president loses and decides to challenge the results, the climate will be complicated because his acolytes will be driven to do the same. That’s what they’ve done for almost four years: copy the president.