Public health experts are concerned that President Donald Trump will pressure the Food and Drug Administration (FDA) to approve a vaccine before its safety and effectiveness is proven, a concern several senators also raised this Wednesday. 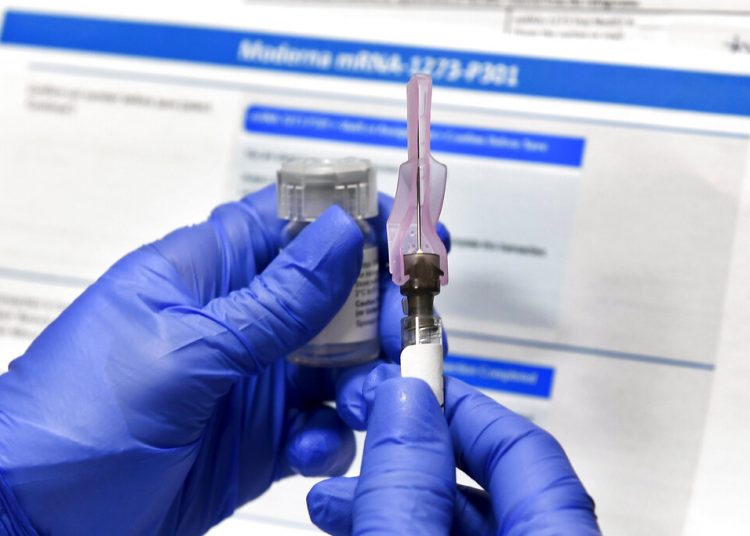 A nurse prepares a syringe as part of the study of a potential COVID-19 vaccine, developed by the U.S. National Institutes of Health and the Moderna Inc. pharmaceutical firm, in Binghamton, New York. Photo: Hans Pennink/AP/Archive.

The suspension of the extensive study on one of the COVID-19 vaccines due to an illness in one of the participants shows that no “concessions” will be made on safety in the race to develop it, the director of the National Institutes of Health (NHI) said this Wednesday to Congress.

AstraZeneca has put studies of its possible vaccine on hold in the United States and other countries, while investigating whether the illness a British volunteer contracted is a side effect or a coincidence.

“This should be reassuring,” NIH Director Dr. Francis Collins told a Senate committee. “When we say that we are going to focus on safety first and that we will not make concessions, this is the first test of how that is being put into practice.”

Public health experts are concerned that President Donald Trump will pressure the Food and Drug Administration (FDA) to approve a vaccine before its safety and effectiveness is proven, a concern several senators also raised this Wednesday.

“When it comes to a COVID-19 vaccine, we cannot allow President Trump to repeat his alarming pattern of putting politics ahead of science and public health,” said Senator Patty Murray, the highest ranking Democrat on the panel.

The United States has invested billions of dollars in efforts to rapidly develop several COVID-19 vaccines. But public fears that a vaccine is unsafe or ineffective could prove catastrophic, seriously affecting efforts to vaccinate millions of Americans.

Collins said the public needs to understand the process prior to announcing that any vaccine is ready for widespread use, one that by design keeps manufacturers and politicians unaware of the conclusion until conclusive evidence is available.

WHO MONITORS THE STUDIES?

All vaccine trials are overseen by a “data and safety monitoring board,” or DSMB. Those boards include scientists and statisticians who are experts in their fields but are not related to either the government or the vaccine manufacturers.

Top priority: Address safety concerns, such as the one that led a British DSMB to suspend testing of AstraZeneca’s vaccines and alert its U.S. counterpart.

Testifying before the Senate HELP Committee today at 10:00 am ET with @Surgeon_General Jerome Adams. We’ll discuss how vaccines protect public health & save lives, & how we ensure they are safe. @NIH to live tweet. Watch the hearing here: https://t.co/9zQt6c57Am #COVID19 #NIH

But it is also the group that will decide when a vaccine is ready for regulators to evaluate.

In each study of 30,000 people, about half of the participants get the real vaccine and the other half get a placebo, and neither they nor the doctors know which is which. Only the DSMB has the authority to unlock the codes of who got what and see how the volunteers are doing before the study ends.

The FDA can’t even begin to consider approval of a vaccine until the DSMB ensures that the data is good enough to start that debate, Collins stressed. Once that happens, the FDA is committed to presenting each vaccine candidate to a public vaccination advisory commission.

The FDA has already informed manufacturers that it will not consider any vaccine that is less than 50% effective.

Let’s say a trial records that 150 of its volunteers fell ill. The DSMB finds that 100 of them had received the placebo and 50 were actually inoculated. The group of experts could decide that the results are promising enough to suspend the study early so that the FDA can debate its merits, even before receiving the results from the 30,000 volunteers, said Dr. Larry Corey of the Fred Hutchinson Cancer Research Institute, which is overseeing U.S. government studies on vaccines.

On the other hand, if a similar number of volunteers who received the vaccine and the placebo become infected, the DSMB could declare the vaccine useless, Corey told The Associated Press. These panels can also calculate the number of infections even before reaching the threshold of 150 volunteers, and establish time points in each study.

“If your vaccine is at least 50% effective, you’ll know because you’re going to see a huge bias” in infections, Collins told the Senate health, education, labor and pensions committee. “Those events are counted and it is known if it has worked or not.”

ANSWERS ARE UNLIKELY BEFORE THE ELECTIONS

Getting the numbers correct before November, as Trump has promised, is “highly unlikely,” Corey said.

Collins expressed “cautious optimism” that one of the vaccines being tested will give results before the end of the year, but he also warned: “Certainly trying to predict whether it will happen in a particular week before or after a certain date in early November is a long way from what any scientist could tell you at this time.”

And even if a study records a series of infections large enough to cast doubt on its effectiveness, the DSMB must also feel comfortable that it has sufficient evidence about its safety before submitting the information to the FDA. The FDA typically requires safety data from at least 3,000 people, U.S. public health director Jerome Adams told the Senate panel.

This is not a new process; phase 3 studies for vaccines and therapies are always done this way, although rarely under such attention.

SUSPENDING A STUDY IS NOT UNCOMMON

It’s not uncommon for a research to be suspended to find out whether or not an unexpected health problem is actually related to the vaccine, Collins told senators who expressed concern about what the AstraZeneca trial pause means for the country’s goal of having the vaccine by the end of the year.

“The reason we’re investing in not one, but six different vaccines, is because of the expectation that not all of them will work,” Collins said.

AstraZeneca did not elaborate on the disease, but Collins indicated that it involves a “spinal cord problem.” Early-stage studies had not revealed any serious side effects, but that is one of the main reasons for doing research on a much larger scale to broaden the search for any reactions.

Final trials of two other vaccines continue, one created by the NIH and manufactured by Moderna Inc., and the other manufactured by Pfizer and the German company BioNTech. Those two vaccines work differently than AstraZeneca’s, which was developed by the University of Oxford, and the studies have already recruited nearly two-thirds of the required number of volunteers.

Several potential vaccines made by Chinese companies are in the final stages of testing in different countries, but with fewer volunteers. Most health authorities are skeptical of claims of success for the vaccine developed by Russia, which has trial results of just a few dozen people.