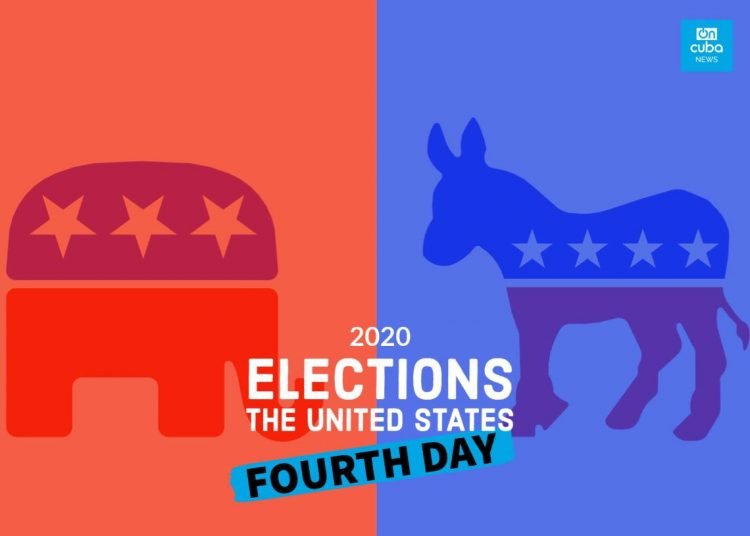 Two viewpoints from the south

Brazilian President Jair Bolsonaro said that he doesn’t lose hope in the victory of Republican candidate Donald Trump, according to the local press.

Advisers to Bolsonaro, a declared admirer of Trump, have advised him to stay out of the U.S. presidential fight, given the possible consequences that this could have for Brazilian foreign policy, in the event of a Democratic victory.

Even so, the son of the president and a deputy, Eduardo Bolsonaro, has maintained an active position on Twitter in this regard, reinforcing the accusations of fraud made by Trump from that same platform, and describing the U.S. Democratic movement as a “well-organized left” while alerting that history could repeat itself in Brazil.

Meanwhile, from Argentina led by Alberto Fernández, the points of view of the situation is obviously different. Even newspapers such as La Nación have wondered which government would be the most convenient for the country, finding answers in experts on the matter, such as Federico Merke, director of the Master’s in International Politics and Economics at the University of San Andrés, who has said:

“I have the feeling that the government is not saying it openly, but is betting on a Biden victory rather than Trump’s continuity. In the short term, Biden would bring a slightly broader agenda to resume contact with Argentina and the region in general, a region that has been largely neglected by Trump,” he said.

Yesterday, Minister of Economy Martín Guzmán made the first reference to the elections. “Trump is not the same as Biden,” he said, explaining the obvious with statements such as that “it would change the issue of multilateralism, international relations.”

“The United States has the primary role in determining geopolitical balances, and they have different views on how to approach international politics,” said the 38-year-old economist.

Four days of tension in the United States. Four days during which nobody has stopped wondering how and when the vote-counting process will end. But, while slow, the elections that will define, not only in the country but in the world, many events in the next four years have taken in the finals a spectacular nature of the best and most dynamic of sports, let’s say, a horse race; or better: it is the final supersonic lap of the donkey against the elephant.

What had already been warned by the Democratic party has been defined when today candidate Joe Biden made a turn in two Republican states. First, the lead in Georgia, with 1,096 votes. Since yesterday, the margin headed by the President had been closing, but at night his lead was unstoppable. Ballots are still being counted. There will be less than 10,000 ballots at this time, from most of the areas with a Democratic preference.

It all happens in such a dizzying way that in Pennsylvania, where Biden was only threatening to take the lead, not only did he suddenly take a leap, but he did so with a difference of 1,500 votes. According to The New York Times, in one fell swoop he got 27,396 votes from Philadelphia; compared to Trump, who managed to get 3,760 votes there. There were still about 20,000 ballots to count in the city.

The state has become a battleground this Friday morning. Now Republican dominance is faltering, something that President Trump achieved four years ago, becoming the first Republican to win a presidential race there, something that had not happened since 1988. On the contrary, if the Democrats finally keep Georgia, they will have once again dominated the state after 28 years of Republican superiority.

Today Friday the Secret Service will send reinforcements to Wilmington, Delaware, to help protect former Vice President Joe Biden as his campaign prepares for the possibility of victory. Secret Service spokeswoman Catherine Milhoan declined to comment on the news already released by various outlets, emphasizing that the agency does not publicly discuss security plans for the president or the candidates it protects.

Dozens of agents have been providing security to the Biden campaign at the Chase Center at the Riverfront Convention Center, Wilmington; meanwhile, the key states are counting millions of votes cast in last Tuesday’s elections.

NEW: The Secret Service is sending reinforcements to Wilmington, Del., starting Friday to help protect Joe Biden as his campaign prepares for the possibility he may soon claim victory in his bid for the White House. Scoop from @CarolLeonnig: https://t.co/GgjEkGVclk

Generally, the agency increases the protection of the president, immediately after that person has been declared the winner, by assigning a new set of agents. Historically, that increase in protection has occurred late at night on election day, after the opposition candidate accepts his defeat, says The Washington Post.

The agency has only faced such a decision once: in the disputed 2000 presidential race between Republican George W. Bush and then-Democratic Vice President Al Gore. Then there was no official president-elect for 36 days, because the two sides were involved in a vote recount in Florida and then a legal dispute that reached the Supreme Court.

Trump’s lawyer: “this election is not over”

“This election is not over,” said Matt Morgan, general counsel for Trump’s 2020 reelection campaign. “The false projection of Joe Biden as the winner is based on results in four states that are far from final.”

Trump campaign's Matt Morgan: "The false projection of Joe Biden as the winner is based on results in four states that are far from final."

Georgia is headed for a recount; "irregularities" in Pennsylvania and Nevada; Trump "on course to win Arizona outright," Morgan says. pic.twitter.com/duNEa9KG6H

Biden is about to reach the 270 electoral votes needed to be the next president. Data analysts are looking at the numbers in Pennsylvania, Georgia, Arizona and Nevada to determine when they can make the final projection on his victory. The final vote count in key states may not be known until Friday night, the weekend, or even next week.

But, in some states, Biden could have an insurmountable lead. In others, mail-in ballots and votes that are counted in strongly Democratic areas could make it clear that Biden will be the winner.

Morgan said the campaign will likely request a recount in Georgia. Already in Pennsylvania, the campaign won a minor court battle, getting its Trumpist election supervisors a few feet closer to the vote counters. The campaign is also expected to challenge a state Supreme Court ruling that ballots postmarked Nov. 3 would be received through Friday. Election officials say the number of ballots received in that lapse has been inconsequential so far.

In Nevada, where Biden has a small lead, the Trump campaign claims that thousands of people “incorrectly cast votes by mail.” In Arizona, the campaign believes that Trump will return to the top when the final vote is counted.