Of the newly detected patients, 27 are autochthonous cases and 17 imported, of which 11 are Russian vacationers who arrived at the Jardines del Rey tourist destination. 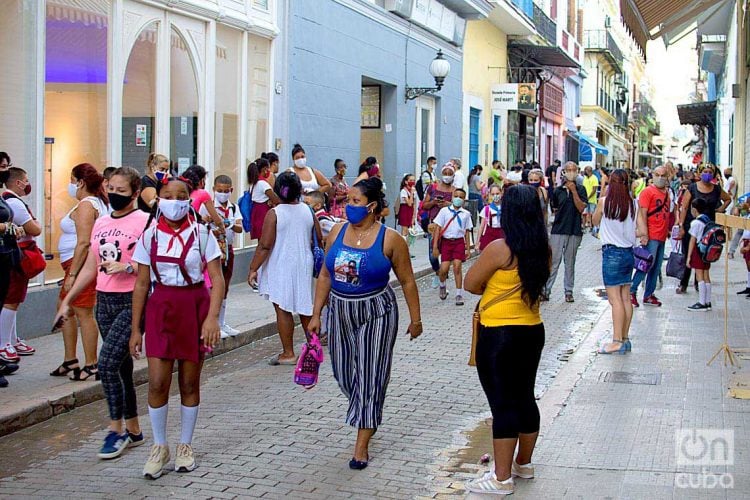 People wearing masks on Obispo Street in Havana, including primary school students, after the restart of the school year in the Cuban capital. Photo: Otmaro Rodríguez.

The Cuban Ministry of Public Health of Cuba (MINSAP) reported 44 new cases of COVID-19 at the end of this Thursday, a day in which 40 discharges were given and one person died on the island―from the central province of Sancti Spíritus―from the disease.

As of yesterday, 3,736 patients were hospitalized on the island for clinical epidemiological surveillance. Of them, 1,063 were suspects, 2,119 were under surveillance and 554 were confirmed, according to MINSAP’s report.

Of those active, 550 have a stable clinical evolution, three are in critical condition and one in serious condition. In addition, the number of patients evacuated since the start of the pandemic remains at two.

As for the newly detected patients, 27 are autochthonous cases and 17 imported, of them 11 foreigners, all Russian vacationers who arrived at the Jardines del Rey tourist destination, in the province of Ciego de Ávila.

Imported cases were also reported in the provinces of Havana and Camagüey, both with three, all Cubans arriving from abroad.

By age, the most affected group was 40 to 59 years old, with 20 cases, followed by 20 to 39 years old, with 17. One minor and six people over 60 years old infected by the new coronavirus were also detected.

Finally, the 27 autochthonous cases were from the provinces of Pinar del Río, with 23―which confirms it as the current epicenter of the epidemic on the island―and Sancti Spíritus, with four. Both territories remain in a phase of limited autochthonous transmission, as does Ciego de Ávila, which yesterday did not register cases.