At the end of October, a cooperation agreement was signed, which includes a financial contribution to the island by the European bloc of one and a half million euros. 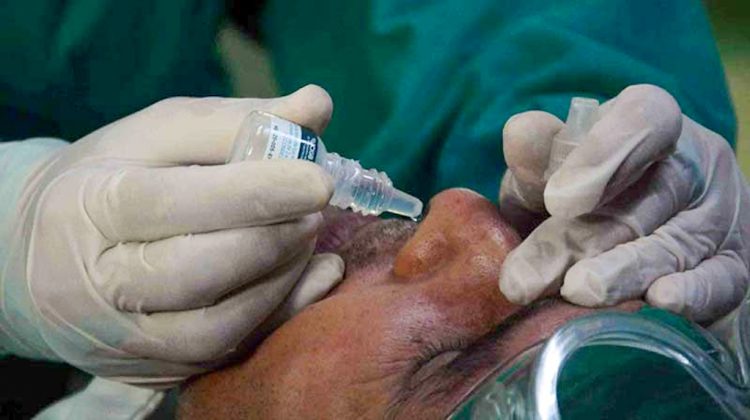 Application of Nasalferon, nasal version of Interferon alfa 2-b, as a preventive treatment against COVID-19. Photo: ACN/Archive.

The European Union (EU) and the Pan American Health Organization (PAHO) will expand the Cuban health system’s capabilities in terms of protection, diagnosis and treatment of COVID-19.

At the end of October, the EU and Cuba signed a cooperation agreement, which includes a financial contribution to the island by the European bloc of one and a half million euros, the Agencia Cubana de Noticias news agency reported.

The head of cooperation of the EU Delegation in Havana, Juan Garay, said this Thursday that the agreement seeks to strengthen the production of protective equipment for health personnel and risk groups, expand national capacity with a view to carrying out diagnostic tests and continue the development of pulmonary ventilators that can prevent critical stage and invasive ventilation, according to the source.

The collaboration project involves the Cuban Ministry of Public Health (MINSAP) and five entities of the state group BioCubaFarma, and foresees the exchange of knowledge between Cuban and European specialists regarding the treatment protocols for COVID-19.

During a press conference, Garay said it is “an honor to be able to collaborate with a country that continues to set an example in the world in terms of respect for the right to health and that in the pandemic has had as a priority to safeguard the lives of its population.”

The representative of PAHO, José Moya, for his part said that the agreement with the EU will benefit Cuban health and also that of Latin America, within the framework of solidarity and Pan-Americanism.

Renowned Cuban Doctor Francisco Durán, National Director of Epidemiology of the MINSAP, stressed that Cuba owes its favorable results in the confrontation against the COVID-19 pandemic to the efforts of scientists, “work that will be supported by the new agreement,” he added.

Durán thanked the international cooperation, which he described as “essential in the midst of the economic crisis and the worsening of the U.S. blockade.”

The MINSAP reported 44 new cases of COVID-19 at the end of this Thursday, a day in which 40 patients were discharged and one person died on the island due to the disease.

Thus, since last March, Cuba already has detected a total of 7,228 cases, as well as 6,542 recovered patients―90.5% of all cases―and 130 deaths, for a fatality rate of 1.8%. In addition, 3,736 patients remain hospitalized for clinical epidemiological surveillance.