The Havana Malecón: Essential Threshold of the Sea 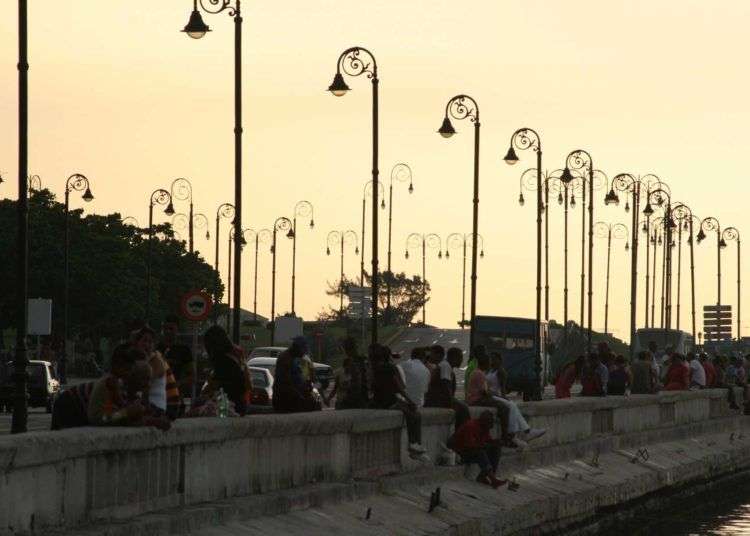 A long concrete wall tightens the waist of Havana. It holds and defends her from the violence of the sea, although at times it cannot stop the fury of the winds that raise waves over two meters high, threatening with devouring it.

In the early days, in the 19th century, they wanted to name it Avenida del Golfo (Gulf Avenue), later Avenida General Antonio Maceo, but no one succeeded in beating the usage of the neighbors, who baptized it forever as the Malecón.

The breakwater silhouettes the city in parallel to the coastline, paying no heed to its irregularities along approximately seven kilometers. It is born at the very mouth of the Almendares River, witnesses its encounter with the sea and reaches slightly beyond the entrance of Havana Bay.

It is both privileged seat facing the sea or the city for thousands of Cubans and visitors who go there to enjoy the sea breeze, to dialogue with the sea, to watch a ship go by in any of the possible directions, to find entertainment in observing the cars ride at high speed along this six-lane highway that borders the city facing the Gulf of Mexico.

The Malecón has also given birth to its own creatures. In it we find the eternal lovers who think they are living the best of all love stories; the fishers who go more in search of company for drinks and conversation than in search of luck for the capture; the bohemian singers who can sing you a song for nothing if you cannot repay their efforts with voice and guitar chords; the daring and many times reckless swimmers, both water nymphs and Tritons, who in their own way rescue the times when the wall was the place for public baths.

And there are others we still have not classified, like the neighbors who open their doors and windows to let all the sun, the saltpeter, the noise of life facing the sea come in, and those who regularly jog or stroll once a year along it.

The Malecón also provides incredible postcards, like the one picturing El Morro or even the statue of Christ, the motor boats that cross the bay to Regla or Casablanca, the entrance to the tunnel under the bay – that huge mouth that swallows all cars and returns them on the other side, beyond our eyesight –; the statues of Maceo and Gómez; its parks crowded with children, their pranks running out the patience of their parents but stealing their smile. And there is also the sun falling upon the sea, as in the cherished view one gets from the windows of Nacional or Havana Riviera hotels.

The Malecón does not belong to anyone in particular and yet belongs to us all. It is our wall, our couch, our seat, our painting, our landscape, our avenue. For that reason it will always be present also in films like La vida es silbar or Suite Habana, both by Fernando Pérez, Operación Fangio or the more recent Juan de los Muertos. Each one of us has included the Malecón in some scene of his own vital film.

It is the place we meet again although we have never seen each other before; where we all go, guided by that passion coming from old times, which is genetically present in each one of us. We are island beings, and the road to the sea is the only one we do not dare to change.

The chipojo lizard and grace under lizard