Stone, between water and sky 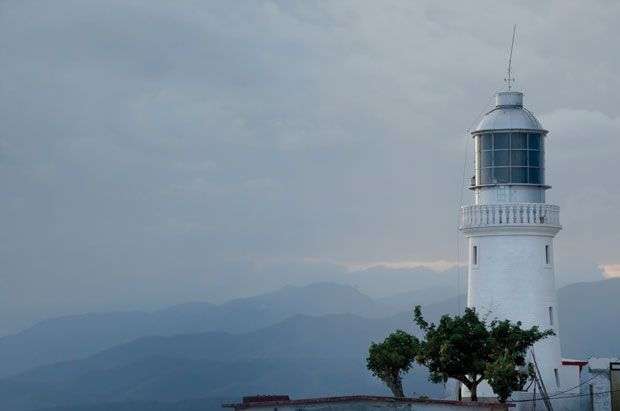 The truth is that you can let your imagination run wild here; there are nooks and crannies in this fort that seem to be frozen in time. They probably looked the same more than 300 years ago, when the castle was the main set of fortifications defending the city of Santiago de Cuba. Today it is a well-designed museum, but as I’ve noted, it has spots that evoke yesteryear’s gunpowder and drumrolls. We are on one of the terraces of the San Pedro de la Roca, better known as the Morro of Santiago. In front of us, the Caribbean Sea and its blue depths; behind us, the stone structure, furrowed with ramps and stairways. Above, the relentless sun threatens to crack the stone. But the toughness of this stone is more than obvious. These fortifications were built to last forever. The city that they protected was fragile in almost every aspect (hurricanes and earthquakes destroyed it in cyclical attacks). The fortress had to be impregnable, a standard-bearer of Spanish power over these lands, these seas. Building this mass of stone on this promontory must have been a titanic task. The hardest part was probably carried out by slaves, or perhaps soldiers. It took them years to erect these superimposed terraces, upon which sit towers and walls, years to carve tunnels and moats into the rock. Oblivion has engulfed the names of the laborers who broke their backs and sweated buckets. But one can still marvel at their work.

We look at the walls, touch them. Close up, they feel rough and look hard, but as a whole, they are harmonious, beautiful in their magnificent simplicity. The medieval lines of the walls and galleries (some thick, others hermetic), the vaulted ceilings and almost non-existent openings…“coexist” with the Renaissance airs of the symmetrical main façade, the drawbridge, and the Moorish motives of its frieze… The castle calls to mind other fortifications in the Caribbean (it is quite similar to the San Felipe del Morro in San Juan, Puerto Rico), but at the same time, it has a delightfully unique fluid quality. The promontory stands at the very entrance to the bay of Santiago de Cuba. A thick blanket of vegetation covers its crags, to the extent that in some places, it seems like the stone is emerging from lush green leaves. Beyond its vaults and turrets, a sharp, cutting quality prevails. In fact, the castle gives the impression of having sliced into the rock, becoming “trapped” amid the hard crests. It is also a question of perspective. From the turrets, facing the sea, the landscape is a serene one, inviting you to rest. In the moats and underground passages, the weight of stone and mortar is overwhelming.

Of course, this site has been the setting for thousands of stories, some of them quite tragic. When the times of pirates and corsairs had passed and it was no longer necessary to protect the city from surprise attacks, the fort was made into a prison. The Spanish authorities locked up more than a few of the colony’s opponents in its dungeons, including, for example, Bartolomé Masó and Flor Crombet, major generals of the Mambí Army. I also seem to recall the testimony of the English painter Walter Goodman: during one of his visits to Santiago de Cuba, he went on an excursion to the fort with some friends and ended up in prison for no apparent reason. They blindfolded him and led him to a rough cell where he could not see the sun. Fortunately, his tale had a happy ending, and he was freed…but in all certainty, the artist was left with an unpleasant memory of this place.

With the passing of time, the fort has become one of the principal attractions of the city of Santiago de Cuba (although it is advisable to arrive by motorized transport, given that the walk can be quite arduous). After years of abandonment, a continuous and serious restoration effort was begun in the 1960s and is now bearing fruit. Because of its architectural and cultural value, the Castillo de San Pedro de la Roca, Santiago de Cuba’s Morro, was declared first a
National Monument and then a UNESCO World Heritage site. Here, visitors can “dive in” to the enclave’s rich history… or rapturously contemplate the immensity of the sea until a ceremonial cannon shot shatters the spell.