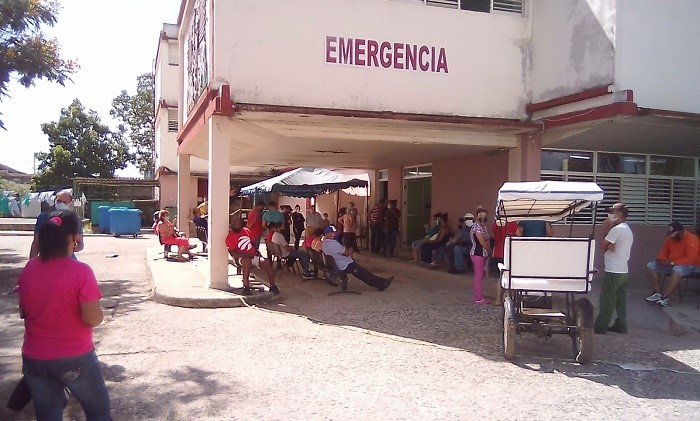 According to Juventud Rebelde newspaper, a contingent made up of 200 doctors and nurses arrived in Ciego de Ávila to cover the deficit in the local public health institutions.

This deficit has been one of the causes of the oversaturation of the health services in the province, where critical situations have occurred with long lines in the primary health system’s institutions due to the high number of people who come to the consultations for acute respiratory infections in search of a rapid test.

During the last two weeks in Ciego de Ávila, 4,614 positive cases have been confirmed, for a rate of 1,055.6 per 100,000 inhabitants. This Tuesday there were 1,094 admitted in the hospital centers, according to data from the Provincial Health Department.

Hit by the high transmissibility of the Delta variant of the coronavirus, other measures are being adopted in Ciego de Ávila to address the overflow of the medical infrastructure. The territory only has two general hospitals.

According to Yuriza Mendiza Molina, head of the Primary Health Care Department, in the last hours the Nguyen Van Troi Psychiatric Hospital came into operation, readapted to treat high-risk suspects.

“This will represent a capacity of 80 beds that will help lower the burden in the health areas, especially in the polyclinics’ consultations and in the Antonio Luaces Iraola Provincial Hospital,” she said.

The arrival of these reinforcements will be a fundamental relief to achieve faster attention in consultations, which average a thousand tests a day, and greater efficiency in hospitals, where their staff are experiencing the fatigue of endless days.

“With this group we managed to have a very important help,” said Mirna Rodríguez Medinilla, head of the nursing section at the Provincial Health Department. “For starters, with 70 of its members we will cover all the beds for COVID-19 patients.”