The study’s principal researcher, Dr. María Eugenia Toledo, stated that so far the results of the process are “encouraging in terms of the safety of the product and the immune response.” 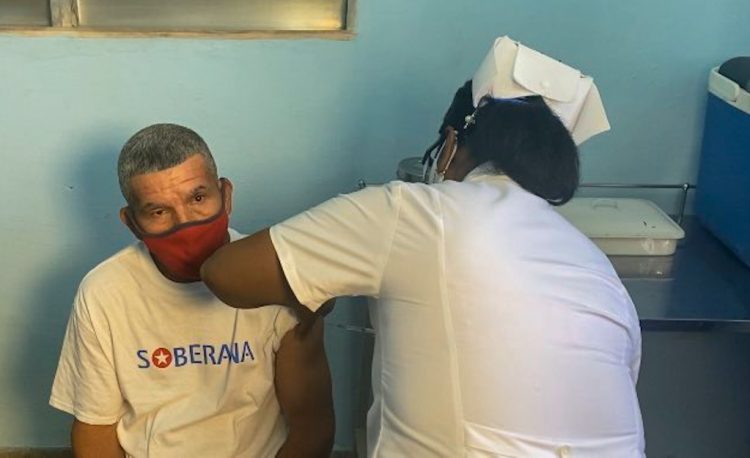 The first stage of the phase III clinical trial with the Cuban Soberana 02 vaccine candidate concluded after administering a dose of the formulation to volunteer 44,010. Photo: @cubadebatecu/Twitter.

The first stage of phase III clinical trial of the Cuban Soberana 02 COVID-19 vaccine candidate concluded this Wednesday in Havana, after the administration of the first dose to the last of the 44,010 volunteers participating in the study.

The study’s principal researcher, Dr. María Eugenia Toledo, stated that so far the results of the process are “encouraging in terms of the safety of the product and the immune response,” according to the Agencia Cubana de Noticias news agency.

During an appearance on Cuban television, Dr. Toledo explained that the first stage of this phase was completed within 18 days and that it involved 31 clinical sites and 48 vaccination centers located in eight municipalities of the Cuban capital, where the vaccine candidate developed by the state Finlay Institute was inoculated.

The specialist reported that COVID-19 cases have been reported among the volunteers, although “most have suffered from mild forms of the disease.”

She said that more than 82% of recorded adverse events have been mild, while serious adverse events were associated with antigen-positive hospitalizations.

“After the administration of the vaccine, adverse events are always reported, which are expected, such as pain, inflammation at the injection site, general malaise and fever,” said the doctor.

Likewise, she explained that study participants can become infected with the coronavirus, because “for them to be fully protected it is necessary to complete the vaccination scheme,” in addition to the fact that the vaccine must prevent COVID-19, not infection with the virus.

The study with this vaccine candidate will continue, following the design implemented by its developers, with two vaccination schemes, one of two doses and the other of three doses, which are administered on days zero, 28 and 56 of the test. The specialist explained that the sample of volunteers is divided into three groups, of which one will receive a placebo.

According to Toledo, it is a blind test, which is why “each of the individuals who entered the Soberana 02 trial has an inclusion number and, based on this, is assigned to one of the groups.” Once the vaccination schemes are completed, the codes will be revealed and it will be known who was injected with the vaccine candidate and who with the placebo, explained Toledo.

The researcher specified that at the end of the study all the volunteers will benefit from the complete vaccination of the scheme that shows the best result in terms of efficacy.

Thus, if the three-dose schedule (two of Soberana 02 plus one of Soberana Plus) is the best, the subjects who were injected only with the Soberana 02 doses will receive the complete scheme.

Meanwhile, the volunteers who received the placebo will be followed for three months, and then the established vaccination scheme will be administered to them.

Cuba has five COVID-19 vaccine candidates in human clinical trials, and in addition to Soberana 02, the candidate Abdala, developed by the Center for Genetic Engineering and Biotechnology (CIGB), is also in the third phase of studies. In addition, with both, controlled interventions are developed in groups selected by the authorities, such as health workers, scientists and athletes.

So far, Cuban specialists evaluate the development of the tests as positive. In the case of clinical trials, these seek to measure the safety, efficacy and immunogenicity of the formulations, while the controlled intervention aims to evaluate the direct and indirect effects of vaccination against SARS-CoV-2, in population cohorts of risk of infection, disease and spread of the epidemic.

Cuban authorities recently announced a roadmap that includes the application of the two potential vaccines to hundreds of thousands of people in the next three months, under the figure of population-based intervention studies. Among them is one in Havana that plans to administer one of the two vaccine candidates to 1.7 of the 2.2 million inhabitants of the capital, the current epicenter of the pandemic on the island.