Until this weekend, 101,943 volunteers had received the initial dose of the Soberana 02 and Abdala candidates, or a placebo, both in Havana and in the east of the country. 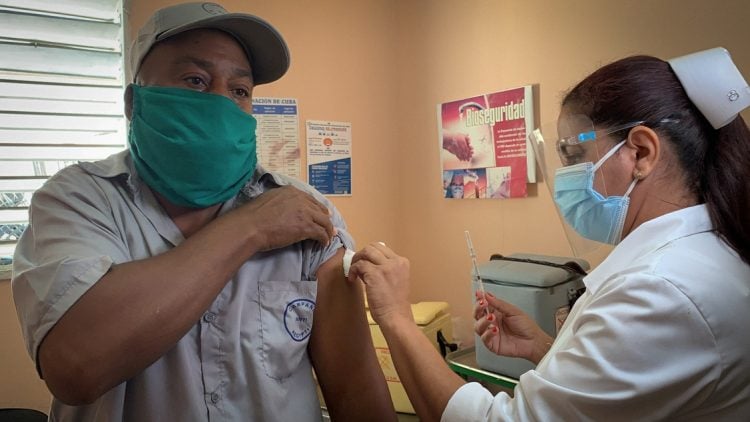 A nurse vaccinates a vector campaign worker with the Soberana 02 COVID-19 vaccine candidate, as part of an intervention study underway in Havana. Photo: Adalberto Roque/AFP/POOL.

More than 100,000 Cuban volunteers have already been vaccinated in Cuba as part of phase III clinical trials and intervention study being carried out on the island with Cuban COVID-19 vaccine candidates.

Until this weekend, 101,943 volunteers had received the initial dose of the Soberana 02 and Abdala candidates—the most advanced in the Caribbean nation—or a placebo, both in Havana and in the east of the country, according to the BioCubaFarma conglomerate.

The state entity specified on Twitter that in the phase III trial of Soberana 02, underway in the Cuban capital, 35,153 people had already been vaccinated, which represents 79.9% of the 44,010 included in the study.

In Havana itself, and as part of the controlled intervention carried out with Soberana 02—in which no placebo is used and a third booster dose of the Soberana Plus candidate is used—47,266 people had already been injected, 63.3% of the 74,665 registered for the first part of the study.

In this intervention, it is expected that around 150,000 volunteers will be immunized, including members of the health, biotechnology, pharmaceutical and other sectors, such as athletes, defined by the Cuban authorities.

Meanwhile, in the provinces of Santiago de Cuba, Granma and Guantánamo, where the phase III clinical trials of the Abdala candidate are taking place, so far 19,524 have been vaccinated, 40.7% of the 48,000 volunteers. The statistics published by BioCubaFarma do not detail how many of the volunteers had been inoculated with doses of the vaccines or with a placebo, nor did they do so with the other phase III study referred to.

However, these figures should continue to grow as of this Monday, since the continuation of these trials, both in Havana and in the eastern territories, was joined by the beginning of another intervention with Abdala, in which some 120,000 volunteers from Santiago de Cuba, Granma and Guantánamo will participate. It also includes workers from the health and biopharmaceutical sector of the capital, including the AICA Pharmaceutical laboratories, the National Center for the Production of Laboratory Animals, the Immunoassay Center and the Luis Díaz Soto Central Military Hospital, according to Tribuna de La Habana.

So far, Cuban specialists evaluate as positive the development of the studies carried out with the island’s vaccine candidates. In the case of clinical trials, these seek to measure the safety, efficacy, and immunogenicity of the formulations, while the purpose of the controlled intervention is to evaluate the direct and indirect effects of vaccination against SARS-CoV-2, in population cohorts at risk of infection, disease and spread of the epidemic.

The Cuban authorities announced last week a roadmap that includes the application of the two potential vaccines to hundreds of thousands of people in the next three months, under the figure of population intervention studies. Among them is one in Havana that plans to administer one of the two vaccine candidates to 1.7 of the 2.2 million inhabitants of the capital, the current epicenter of the pandemic on the island.

Despite the high percentage of the population involved in these studies, Cuban President Miguel Díaz-Canel specified that “it is not a vaccination campaign” and what is used are “vaccine candidates, not vaccines,” an idea reiterated by the island’s experts, in whose opinion the country should have enough doses of Soberana 02 and Abdala for the month of August to immunize the entire Cuban population.

In addition to these candidates, Cuban scientific institutions are investigating three other formulas that are in intermediate phases of studies in human beings, while carrying out other projects related to the prevention and treatment of the disease.

Dr. Rolando Pérez, director of Science and Innovation at BioCubaFarma, precisely confirmed this Monday that next April the regulatory authority must be requested to authorize a phase II clinical trial of the Soberana 01 candidate in the central province of Cienfuegos, and another study with Soberana 01 and Soberana 02 in the pediatric population. In the latter, the idea is to include minors between 12 and 18 years old in the first stage, and then between 5 and 11 years old, the specialist specified.