Twelve months have gone by since the first infections and the disease, far from subsiding, is experiencing its most complex scenario today. But, at the same time, the island exhibits achievements and indisputable successes against the pandemic.

OnCuba Staff
in Coronavirus, Health in Cuba, Science in Cuba
0 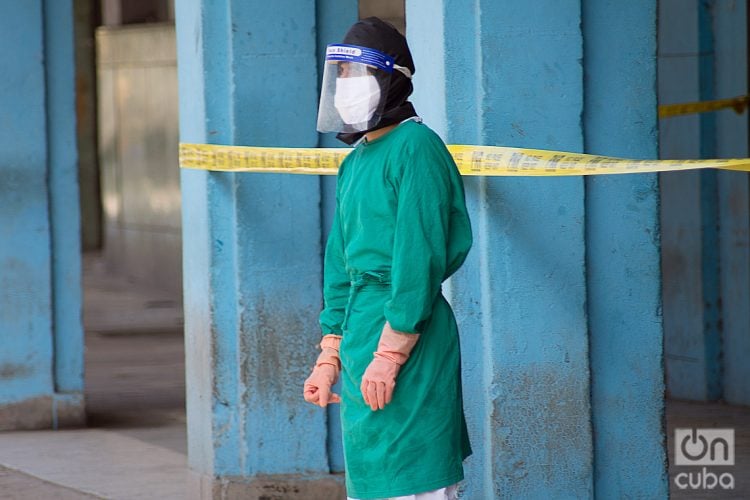 A health worker in an area in isolation due to COVID-19 in Havana. Photo: Otmaro Rodríguez.

A year ago, on March 11 of the already fateful 2020, the Cuban authorities reported the first cases of SARS-CoV-2 on the island, precisely on the same day that the World Health Organization (WHO) officially declared the coronavirus pandemic. They were three Italian tourists detected while they were staying in a rental house in Trinidad, in the central province of Sancti Spíritus.

Just a day later the first Cuban infected was known: a young man from the city of Santa Clara―infected by his wife, a Bolivian woman who had arrived days ago from Lombardy, Italy―, who would be, in turn, the first recovered patient in Cuba before the end of the month. And just on March 18, one of the three Italians confirmed a week earlier died, thus becoming the first death from COVID-19 in the Caribbean nation.

Twelve months have gone by since the first infections and the disease, far from subsiding, is experiencing its most complex scenario today. The island, which had largely managed to keep the coronavirus at bay during 2020, is going through a harsh outbreak today, with unprecedented figures so far for the country, while the world―which already registers more than 118 million infected and 2.6 million deaths―is debating about closures and re-openings, collapsed hospitals, vaccination campaigns and the spread of new strains.

As has happened in almost the entire planet, Cuba has experienced different stages throughout the pandemic. From the first wave, between March and May approximately―with its highest peak in April, the month in which 1,324 cases and 57 deaths were registered―to the current third wave, by far the most disastrous―with more than 50,000 infections and more than 220 deaths, since December to date―, the nation has experienced times of ups and downs, of containments and outbreaks, of reinforcement and relaxation of the measures and restrictions established to curb the spread of the virus. 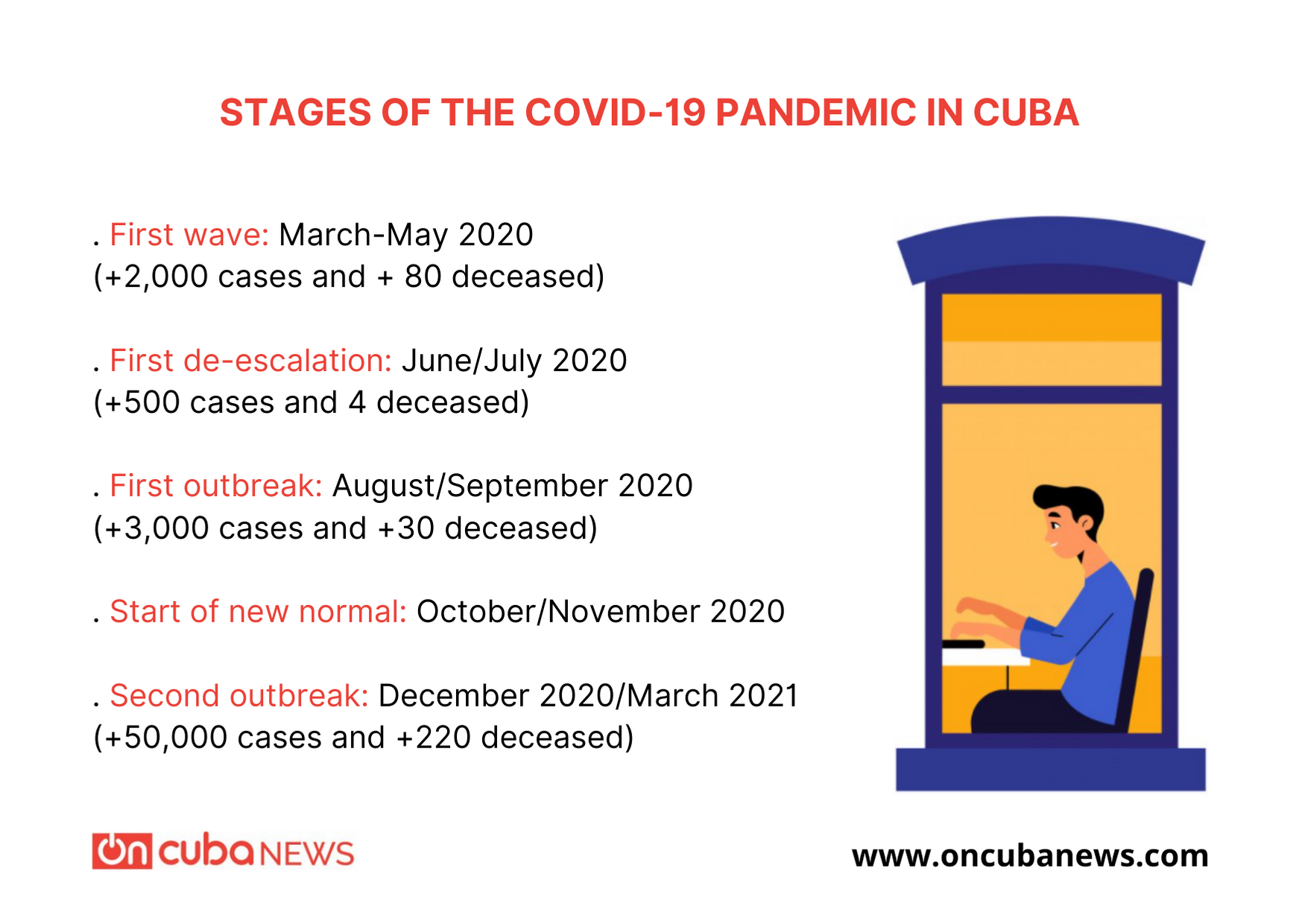 With the pressing need of preserving the health and life of Cubans and, at the same time, of maintaining the vitality of the economy―which dropped up to 11% last year amid tensions over COVID-19 and the U.S. blockade/embargo―, the government of the island has been closing and reopening depending on the epidemiological situation of each moment and territory, following the guidelines of the health authorities and the advice of scientists and specialists from various sectors.

It has been an arduous road, not without indiscipline and difficulties, inconsistencies and overconfidence, rectifications and constant calls for attention, in which the contagion curve has risen and fallen, and then risen again―so far in 2021, the cases of all of 2020 have practically quadrupled―to now approach 60,000 positive cases. But, despite this, and the undeniable material shortcomings and financial limitations, there is no doubt about the island’s successes and right decisions in its fight against COVID-19. 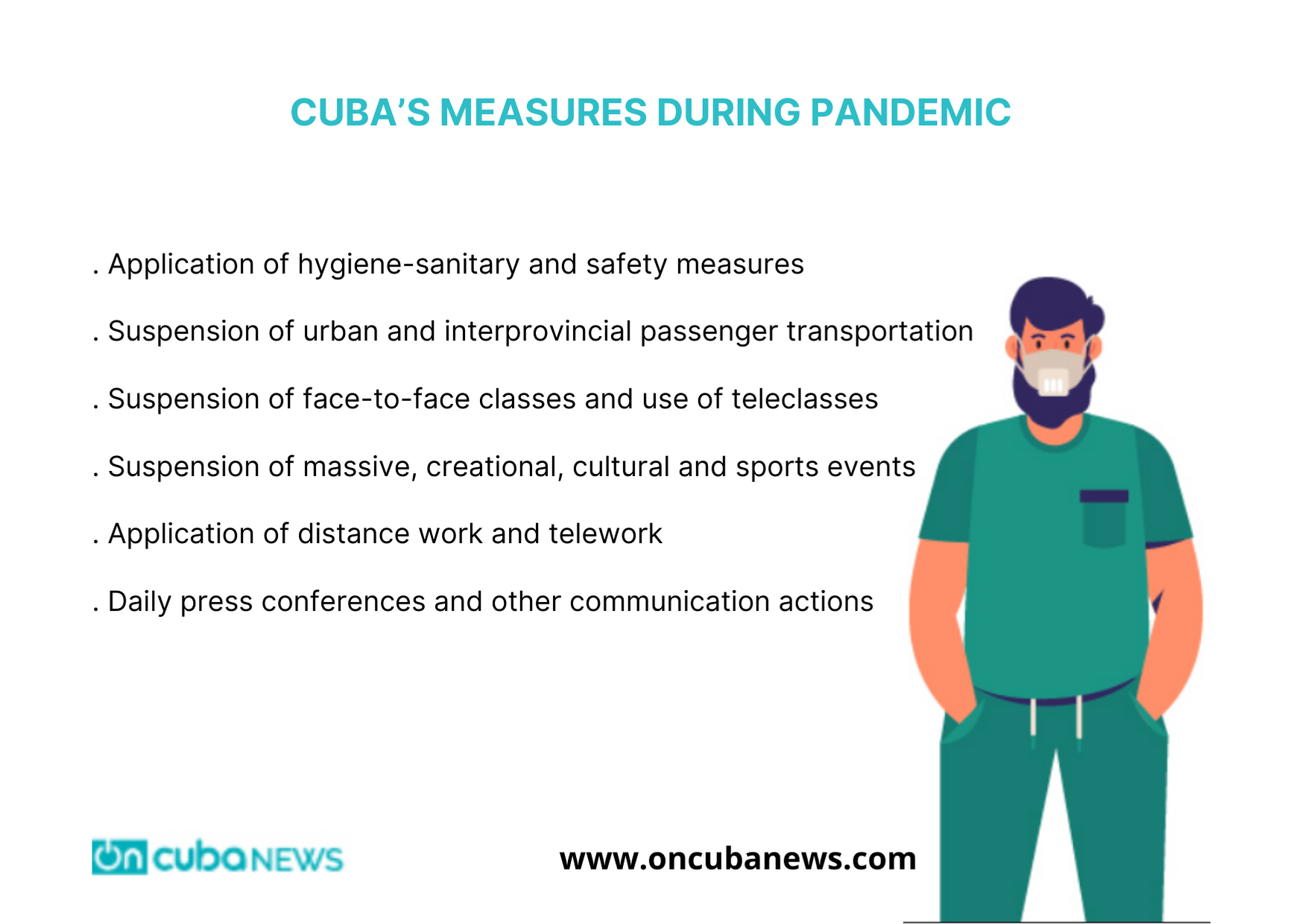 The sanitary protocols and the hygienic and safety measures applied, as part of a strategy that has been recognized by international organizations and experts, have proven their effectiveness in the field, on a day-to-day basis, even when irresponsibility and violations of the established measures have led to gaps that the coronavirus has not forgiven. All of this has been systematically followed, analyzed and coordinated by the government, by the working group created for the issue of the pandemic, headed by President Miguel Díaz-Canel, and in conjunction with the Ministry of Public Health ―which is also responsible for the awaited daily press conferences―and local authorities. 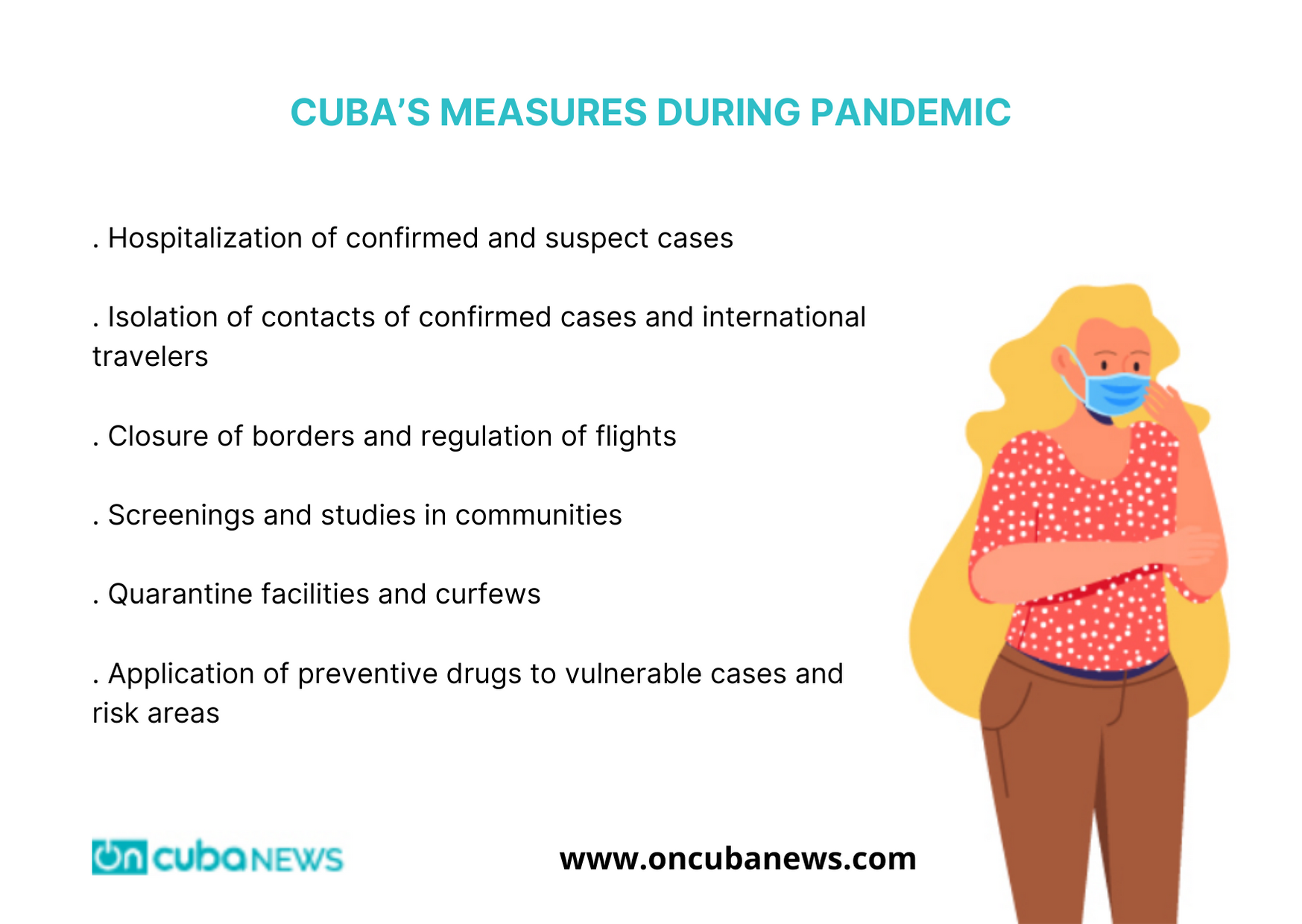 Similarly, the achievements of Cuban science and medicine to confront the disease are undeniable. The treatments applied, both preventive to suspects, contacts, vulnerable groups and people in risk situations, as well as those for the already sick―and within these, in particular, to patients in serious and critical condition―have been essential to prevent further peaks in infections, more people in intensive care and more deaths, although the third wave that is hitting the country has increased the negative statistics and sadly multiplied the number of deaths until reaching the closing of this Wednesday with 361, among which, oh yes, there are no children, adolescents or pregnant women.

The systematic updating of medical protocols―in which the drugs made in Cuba play an indisputable role―based on the advance of the pandemic and the investigations carried out inside and outside the island, is one of the strengths that the Caribbean nation exhibits today; as well as having a qualified and consecrated health personnel, who have already been face to face with the pandemic for a year, both in the red zones of hospitals, isolation centers and in Cuban communities as well as in around forty countries and territories to which brigades of the international Henry Reeve contingent have gone to. 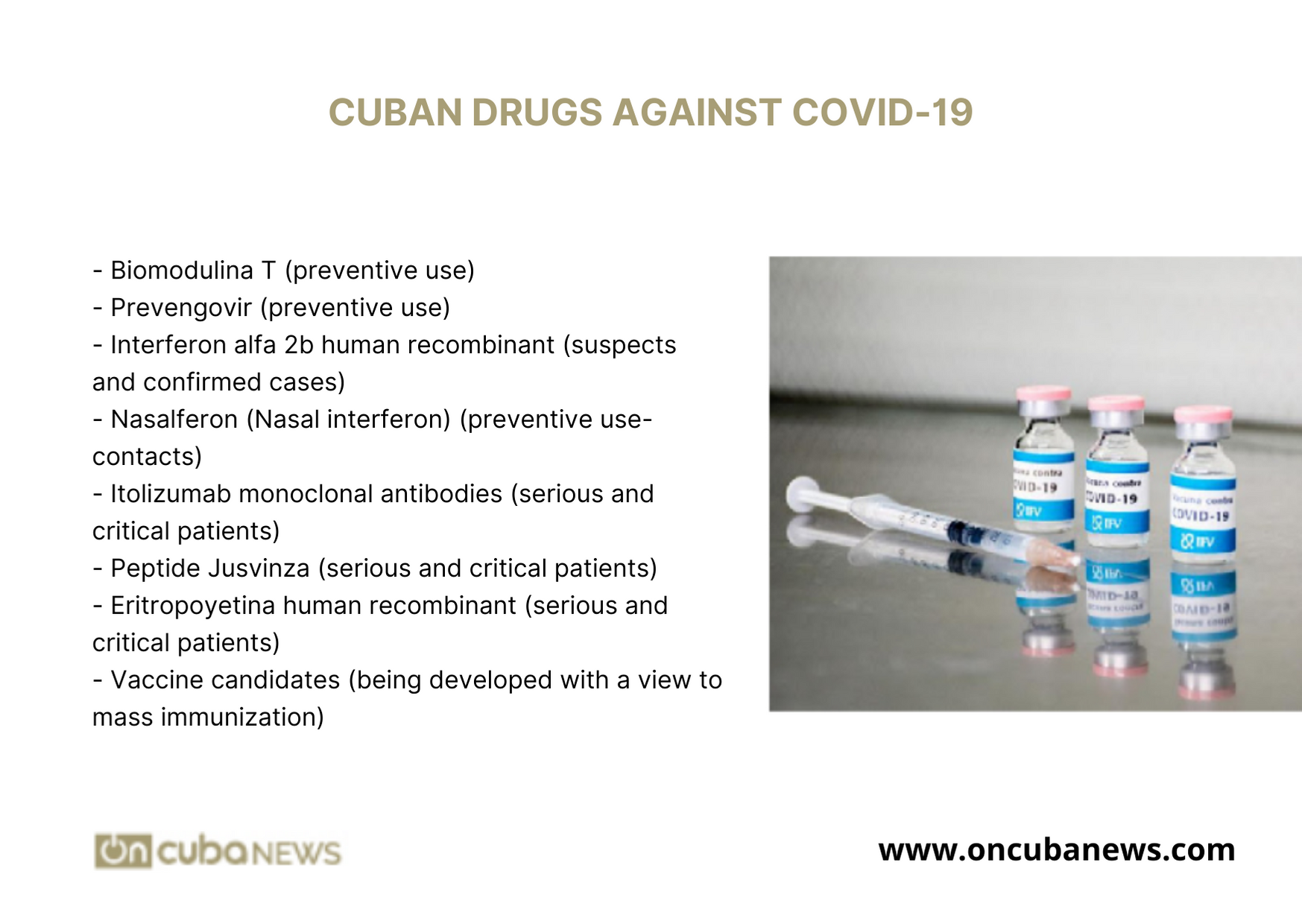 Cuba’s strengths are also its numerous studies on COVID-19, its incidence and consequences; collaboration between its various scientific institutions; the production of medicines, supplies and devices for the fight against the disease; the creation of a network of laboratories for its diagnosis―which now exceeds twenty and in which more than 20,000 PCR samples have been processed in one day; the elaboration of forecasting models and statistical bases, used later in the design of the protocols and decision-making; and the development of its own vaccine candidates, with a view to mass immunization of Cubans and their use outside the island. 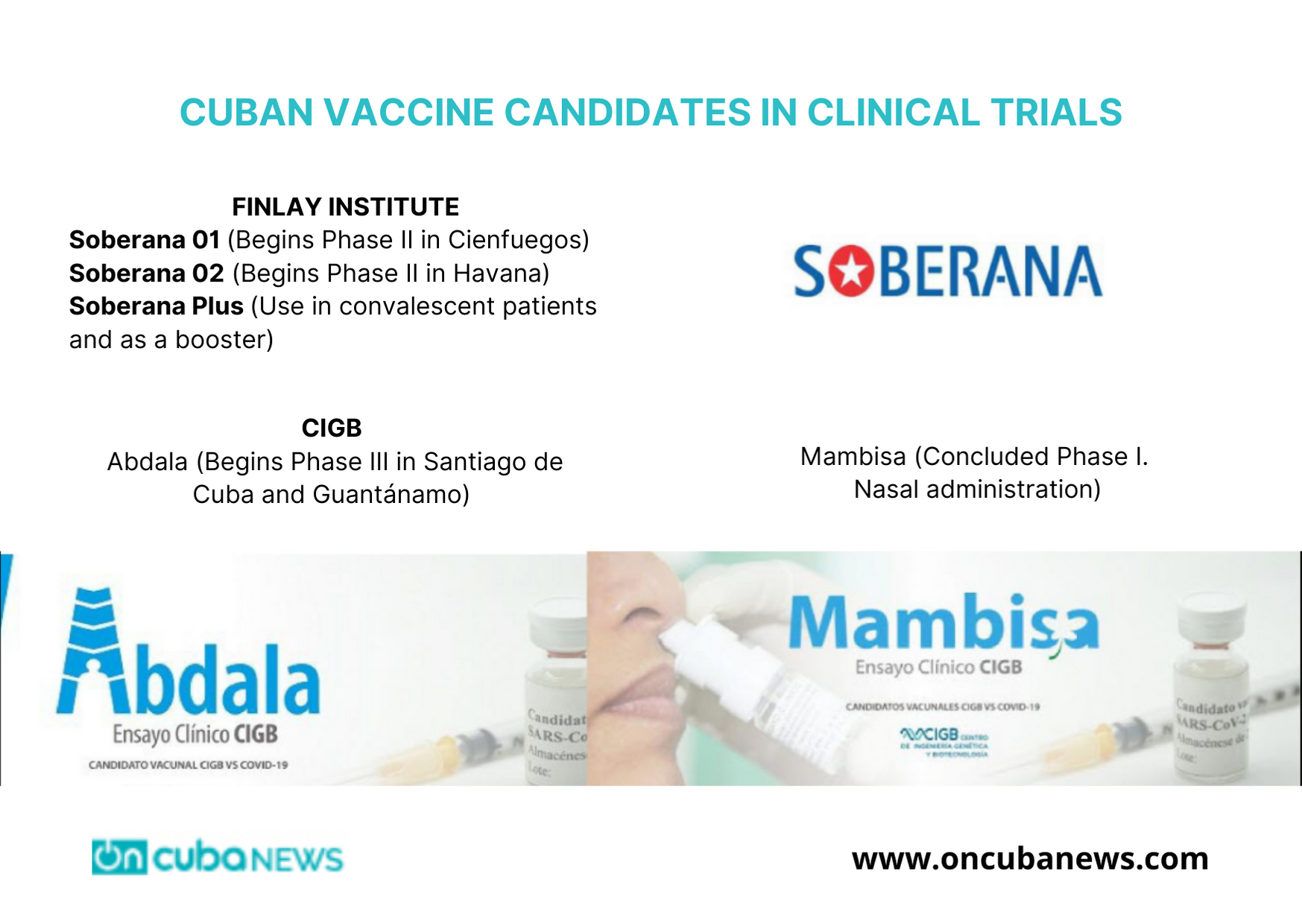 Thus Cuba gets to a year with the coronavirus. With undisputed achievements and, at the same time, with a complex epidemiological situation. Today, in the midst of the current outbreak, almost all the island’s provinces have regressed to the transmission stage or initial recovery phases, while the rate of autochthonous positive cases in the last 15 days is 107.6 per 100,000 inhabitants, one of the highest of the entire pandemic, active cases are 4,656 after the tenth day of March and the number of patients in intensive care marks a negative record, with 80.

Havana, with more than 26,500 infected―a little less than half of the country’s total―continues to be the epicenter of the epidemic, as it has been for almost all these months, although, beyond the capital, SARS-CoV- 2 has spread throughout the Cuban geography and only the Guantánamo municipality of Yateras has not reported cases of the disease. Santiago de Cuba, Guantánamo and Pinar del Río are other territories with red numbers in the last year―mainly due to the current wave―while Cienfuegos and Las Tunas have been the provinces least hit by the virus.

In this difficult context, the challenge that the island still faces is great. Even with vaccination on the horizon, with efforts already made and projects underway, there is still a lot to do. It is true that what has been achieved so far invites, at the very least, to give Cuba, its health professionals, scientists, authorities and the population in general, a vote of confidence. But such endeavor must be supported with responsibility, perseverance and citizen discipline. Only then can COVID-19 be defeated.