The system can be used to diagnose patients with suspected infection of the virus that causes COVID-19 and also to follow up the evolution of cases from the fifth day after the first PCR.

OnCuba Staff
in Health in Cuba, Science in Cuba
0 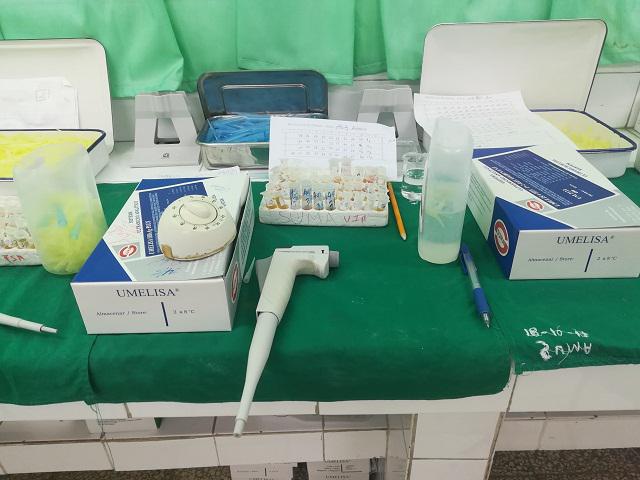 A Cuban system for the detection of antigens to the SARS-CoV-2 coronavirus finished its external evaluation this week with “very good results” at the Center for Research, Diagnosis and Reference, of the Pedro Kourí Institute of Tropical Medicine (IPK) in Havana.

This was announced by the Immunoassay Center (CIE), the institution that created the prototype, which also reported on Twitter that five trials have already been completed with the diagnostic system, named Umelisa SARS-CoV-2 IgG and that it is based on the SUMA (Ultramicroanalytic System) technology.

The system can be used to diagnose patients with suspected infection of the virus that produces COVID-19 and also to monitor the evolution of cases from the fifth day after the first PCR, specified a report published in the official newspaper Granma.

Niurka Carlos Pias, general director of the CIE, said she was satisfied with the result and congratulated the scientists responsible for it.

“There are many other commitments and challenges, we still have a lot to do but today we are happy, we fulfilled a task that we owed to our country. Congratulations to our scientists who worked tirelessly. Thankful to @IPKCuba who carried out the evaluation and validated it,” she wrote on Twitter.

In an interview with Granma last year, the executive explained that Umelisa is a system “capable of detecting IgG-type antibodies in serum or plasma samples, and for this, it uses synthetic peptides from immunodominant regions of the virus” (protein segments of the virus on which the immune response of the infected person develops), which were synthesized by CIE researchers, with the collaboration of the Ministry of Public Health and the Center for Genetic Engineering and Biotechnology (CIGB).

“The system has the advantage of being able to be applied in massive screenings of the disease, together with the results of other laboratory tests, in addition to being able to undertake epidemiological studies aimed at knowing the degree of exposure to the virus that a certain population group has had,” Carlos Pias added.

Cuba has also developed a PCR sample diagnostic kit, an innovation based on nanotechnology that can be used with imported PCR kits and does not require a cold chain for conservation. It is a creation of the Center for Advanced Studies (CEA), which has already been validated in the IPK and received authorization for emergency use by the Center for State Control of Medicines, Medical Equipment and Devices (CECMED), Cuba’s regulatory authority.