A U.S. official quoted by the EFE agency, who did not give an approximate deadline to complete the process, said that they are exploring new and innovative options to try to evade the regime and make sure that the benefits go directly to the Cuban people. 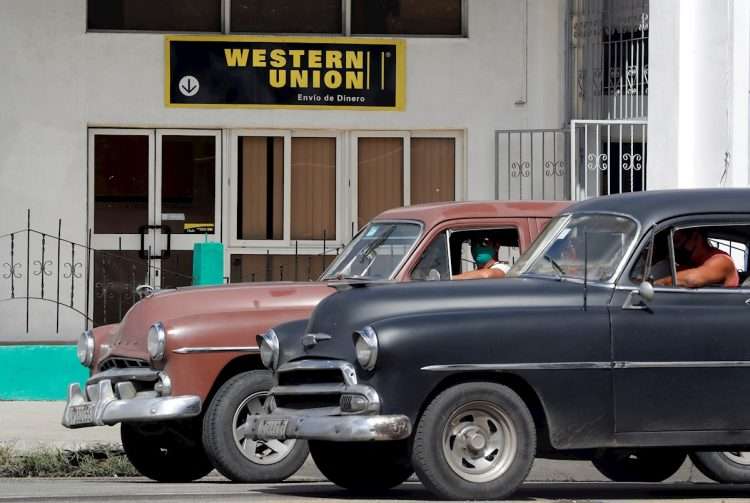 Two vintage cars pass in front of a Western Union office, in Havana, on its last day of operations in Cuba, on November 23, 2020. Photo: Ernesto Mastrascusa/EFE/Archive

The process to decide whether to reauthorize the sending of remittances to Cuba from the United States, banned for almost a year, has been prolonged after the White House rejected some recommendations on the subject, an official source reported this Friday.

The president of the United States, Joe Biden, in July ordered his government to identify possible ways to resume sending remittance payments to the island, a crucial source of income for Cubans that the Executive of Donald Trump (2017-2021) cut off at the end of November 2020.

To comply with Biden’s guidelines, the State and Treasury Departments created a task force on remittances that has already submitted its recommendations to the White House, revealed a senior U.S. official this Friday, who requested anonymity.

However, the White House has “sent back some” of those recommendations to the working group, because it wants “to make sure that the Cuban military will not derive benefits” from the remittances, the official added in a telephone press conference with a small group of media, including the EFE agency.

Achieving this objective is complicated, according to experts, given the Cuban Armed Forces’ extensive control of the country’s economy, and that is why the Biden administration’s assessment process “is taking time,” in the words of the aforementioned official.

The source, who did not give an approximate time to complete the process, stressed that they are exploring new and innovative options to try to evade the regime and make sure that the benefits go directly to the Cuban people.

The official stressed that Biden wants to find a “third way” concerning Cuba, between the opening of the Barack Obama administration (2009-2017) and the hard line imposed by Trump, especially after seeing the Cuban response to the anti-government protests on July 11 on the island.

After Trump prohibited sending remittances to Cuba through companies such as Western Union, which concentrated the vast majority of remittances from the United States to the island, the only way that remains to get that money is the informal one, through travelers who carry currency in cash, a method complicated by the pandemic.

In addition to the issue of remittances, in July Biden ordered his team to analyze the possible transfer of more personnel to the U.S. embassy in Havana, drastically reduced after, in 2017, several U.S. diplomats suffered mysterious “health incidents” that have also taken place in other countries.

The president also asked to clarify if the United States can help improve the stability of the internet in Cuba, which was restricted after the July protests, and that issue is still pending as well.

The aforementioned official said that Biden had asked them to see what they could do to……facilitate the connection between Cubans, and that it is an issue that they are studying very thoroughly.