Osdalgia: “A challenging future awaits me” 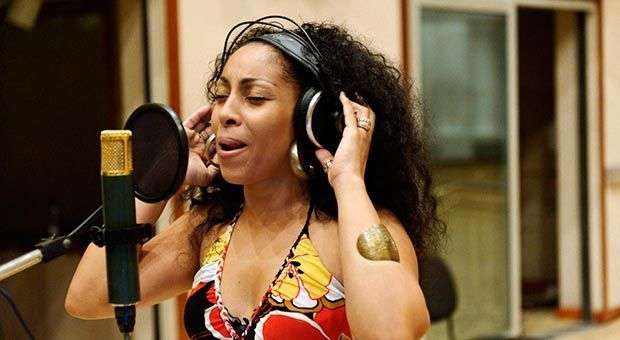 In Cuba everyone knows Osdalgia not only as a singer but also as an actress, writer and television host. I personally witnessed one of her concerts in La Cabaña fortress on the occasion of an International Book Fair.

However, I had this urge for interviewing her a year ago, when I had recently arrived in Hannover, and joined her music to lessen my nostalgia.

I found her latest albums on the internet and I was shocked by the way music can be commercialized nowadays by means of online platformsas CD Baby.

This interview is about Osdalgia’s latest album and current projects.

Between 2000 and 2003 you moved frombeing “Cuba’s New Voice” to “the Daughter of the Buena Vista Social Club”. Now, after ten years, what do you think is left from that period?

My career has had several stages, which have been visibly different.

Since my debut in Havana –I unexpectedly became part of a musical and dancing show in 1992—till 1999, I learned about music, I learned to sing and to hear my voice and to personalize it. It was a stage of forced steps and fear. I was some sort of compass without a needle pointing at the North. Just imagine my head!

In 2000 I began to feel confident with my voice. Then, I demanded myself to study the repertoire and my weaknesses for hours, so I was surprised when I found out I people called me “Cuba’s New Voice” and that was like my first commitment with Cuba and its music. My compass found its North!

Thus, working and studying hard and risking and imposing my musical opinion, demanding a lot from my voice and my feelings, my brain and my strength, I became the “the Daughterof the Buena Vista Social Club” in 2003.

Then, I reached the important, natural and necessary stage of becoming a mother. And the mother beat the singer.I continued working with the same strength and interest but my perspective, my tempo, my body and my voice changed. They became more intense and cautious, I needed to find new vibrations but it wasn’t until 2009 that I found some calm. I had never worried about being popular; I had always focused on the quality of my work. Quality completely depends on the adjustment of the senses, and the sense that emerges when we become mothers was like a beginner fitting in a cast of senses already trained.

In 2010, I was hit by Miami and its artistic whirlpool. My voice was at its best, it was precise and energetic, with a touch of voracity. Life demanded that I adjusted and learned quickly about musical production; marketing; contractual, promotional and musical strategies. I expanded my range of rhythms and genres and I outlined my professional map. I guided my compass to Puerto Rico and until 2014 I have increased my artistic and musical productions.

People are still discovering me. I’m still discovering myself! I’m still not concerned about popularity, she hasn’t abandoned me; it has just given me some space and time for learning. All my personal and professional stages have been about growth, sometimes up and sometimes to the sides, and I have even taken steps back in order to gain strength, always gaining ground with more knowledge. Now, “a challenging future awaits me. My compass has been set right, my senses have been adjusted and I’m still fighting with discipline and I’m open to learning.

Your latest album Sones y Pasiones has had Cuba and Puerto Rico as the musical and/or production context. Why Puerto Rico? Is this the result of certain circumstances or a decision?

From 2012 on, I took my music to Puerto Rico through a Boricua friend, CarmenchiGarcía, who has been essential in this stage of my career. Our friendship began circumstantially during one of my performances. She was greatly interested in my work; I began to record my live concerts at El GatoTuerto night club in Havana, we started dreaming and eventually Osdalgia Contigo, live and then Osdalgia Sones y Pasiones, live Yerbabuena Puerto Rico emerged. These records were independently produced in the US with MIMISMAPRODUCTIONS21; therefore, they emerged with the chance to be distributed on the internet in www.cdbaby.com and in Puerto Rico’s tangible market. Osdalgia Sones y Pasiones was recorded on purpose in Puerto Rican soil because we wanted to combine my voice and the Cuban and Puerto Rican flavor.

Furthermore, many Puerto Ricans were eager for such meeting. We had the support by the Yerbabuena restaurant-sala concert; radio broadcasts Son de Cuba and Son del Caribe by Radio Universidad (WRTU), Solo Boleros, by Radio Oro (WORO) and De todo un Poco, by WIPR AM. We also relied on the contribution by journalists from Nuevo Día and El Vocero newspapers, television program Con la Música por Dentro, Internet spokespersons and Puerto Rico’s Arts and Musical Corporation.

In Sones y Pasionesas well as in Osdalgiacontigo (live), which belong to the trilogy “Nostalgia cubana”, we find a different Osdalgia, closer to the poet and the writer. Am I right? What can you say about it?

Yes, they are part of a trilogy. I’m already preparing the third one which will be focused on voice and piano. And yes, you are right, this Osdalgia– allow me to refer to myself in the third person—is closest to the poet and the writer. This is a part of me that is reflexive, intense, sometimes delirious, tormented or loving, sometimes lucid… sometimes feverish.

At the same time this Osdalgia reveals her heart, accompanied by her faithful guitarist Vidal Tarin for more than 14 years, in night clubs and the music bohemian people share, whether in this spaces or in family festivities and among friends.

This Osdalgia, along with other six children, used to join her aunt, singer and actress, during her presentations at Cuba’s Musical Theater, and awaited sitting on a table the Piano Bar Las Cañitas at the Habana Libre Hotel, at the Pico Blanco in the Saint John’s Hotel, or at the Parisien Cabaret in the National Hotel… living and listening to the artists while having a soft drink.

So, that’s the reason for “Nostalgia Cubana”.

If you were asked to define Sones y Pasiones in one sentence what would you say and why?

Would you like to highlight someone’s cooperation in this album?

Many Cubans and Boricuas have contributed with this album, Osdalgia Sones y Pasiones, live Yerbabuena Puerto Rico. It wouldn’t have been possible without its musicians and sound technicians. The Puerto Ricans stamped a seal on it that makes it different from my previous albums. Yet, I have to extoll the work by Cuban Vidal Tarin, Puerto Rican Tony Mapeye, and of course Puerto Rican Loíza Carmenchi García.

Are you getting closer to the third album of this trilogy? Can you give us some advances on the tracks it will include?

The last volume of the trilogy will be produced only by voice and piano and I will be working with Roberto Carcases. It will include a Cuban and international repertoire.

I have recently concluded the DVD Osdalgia desde el cine, a live concert given at the Cuban Theater of Fine Arts, under the direction of producer Lester Hamlet and musically produced by myself with the Colibri label. Some of the artists invited are: Bobby Carcasses, Roberto Carcasses, Danay Suarez and Adrian Berazain. It pays homage to the Cuban cinema and it has been nominated to the Cubadisco 2014 Awards in two categories: Live song and Audiovisual concert. It will be released soon, as long as the Virgin of Charity and Colibri allow it!

Therefore; the final Project of the trilogy “Nostalgia cubana” is in its initial stages. As an advance I can say that it will also be an independent production.

Let’s just imagine that a hundred years from now someone is making a compilation of Cuban music in order to reveal the excellence of Cuban singers and you need to choose one track from Sones y Pasiones. Which will it be?

It will be the track ¨Ni Odio¨. Listen to it!

I will surprise you! I recently finished the video clip for that song. In YouTube you can already enjoy the making off of the video that will be released in a month from now.

It is a modern and traditional guaracha, and it is intentionally ambiguous. It was producedby young artist Ernesto Llerena and actors Nestor Jimenez,ArlettiRoquefuentes, Roberto Albellarand artists Jose Luis Cortes ¨el tosco¨, Juana Bacallao, Veronica Velazquez and stylist Rogelio Condetake part in it. You know I like to mix music with acting; even the neighbors participated in the video. It was really fun!

There are many projects. The most immediate is not my idea of my own and it has been already set in motion. In January, 2014, the project Havana Culture, boosted by Havana Club International and English-French producer Gilles Peterson, launched an international DJ contest with one of my songs musicalized by jazz player Roberto Fonseca: “Agita”. The winners will record a new album this May and of course, I will be part of it. I want to finish the third album by the end of June and in July I’m thinking about shooting a documentary on my life and artistic career under the direction of filmmaker EliezerPangueira.

I have other musical and theater projects in mind but that’s material for another interview, jajaja. You can get an update on www.osdalgiacuba.com.

Thanks for giving me some of your time. I wish you health and prosperity!