Biden lived through the “thaw” as Barack Obama’s vice president and, during his campaign, he advanced that he would retake it, canceling, at least, the measures that hinder relations between families on both sides. 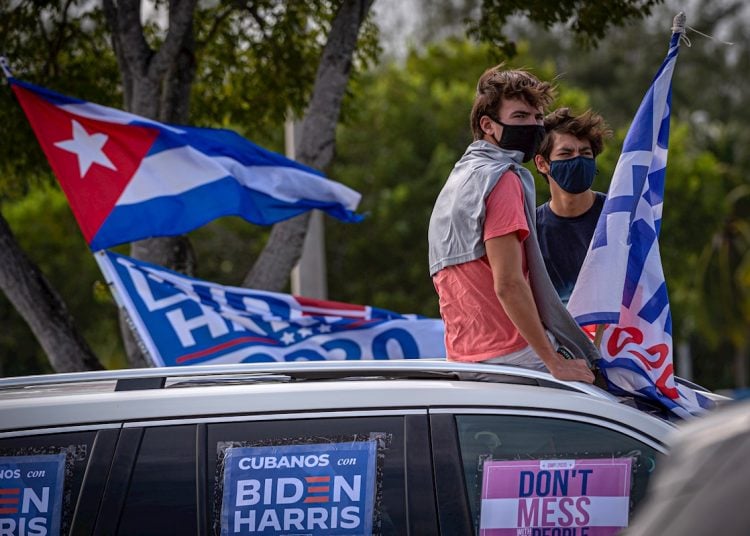 Some young people listen to the speech of the former U.S. President Barack Obama, sitting on the roof of a car decorated with posters that say “Cubans with Biden Harris,” during a rally in support of Democratic candidate for the presidency Joe Biden, in the Biscayne Campus of Florida International University (FIU) in Miami, Florida. Photo: Giorgio Viera/EFE.

The arrival of Joe Biden to the White House opens a new scenario for relations between Cuba and the United States, marked by hostility and increased sanctions during Donald Trump’s term in office. Will the Obama-era thaw return?

The ephemeral rapprochement faded in four years at the same rate as more than 200 sanctions from Washington that have pushed an already exhausted Cuban economy to the brink, under the argument of Cuba’s supposed support for Nicolás Maduro, in Venezuela, and the lack of democracy on the island.

Trump punished transportation, tourism, and remittances; banned business with an extensive “black list” of companies linked to the Cuban military; paralyzed consular services after mysterious health problems suffered by U.S. diplomats; and bid farewell by returning Cuba to the list of sponsors of terrorism, from which it had been taken out in 2015.

For many, it was a strategy to win votes in Florida, the epicenter of Cuban exile.

Biden lived through the “thaw” as Barack Obama’s vice president and, during his campaign, he advanced that he would retake it, canceling, at least, the measures that hinder relations between families on both sides.

ONE SIGNATURE WOULD BE ENOUGH

The question is this: how much room for maneuver does he have and how far will he go? But also: how open to a new rapprochement is the Cuban government, which in addition to being the aggrieved party has a hard sector historically more comfortable in a trench scenario?

“Biden can immediately reverse each of Trump’s sanctions using his executive powers, because that is how they were imposed,” William LeoGrande, professor at the American University of Washington and author of Diplomacia encubierta con Cuba: Historia de las negociaciones secretas entre Washington y La Habana.

The bureaucracy to remove Cuba from the list of sponsors “may take a few months,” but it doesn’t prevent the removal of the other sanctions, he clarified.

“The elements to do so are available,” said Professor Arturo López-Levy, from Holy Names University (California), citing aspects such as the return by Cuba of several fugitives from U.S. justice even during the Trump administration.

There are already voices in the U.S. asking the new president to give priority to Cuba, such as Democratic Congressman Jim McGovern and weighty foreign policy organizations such as the Washington Office for Latin American Affairs (WOLA) or the Center for Democracy in the Americas (CDA).

They published a roadmap for Biden in which they recall that six decades of a hard line blocked issues of mutual interest, made life difficult for Cubans and paved the way for the influence of Russia and China.

As reasons to accelerate the rapprochement, they cite the crisis in Venezuela—Cuba’s main ally—and the celebration this year in the U.S. of the 9th Summit of the Americas, a good setting for the presidents of both countries to dialogue.

The third reason is that doing so is, as LeoGrande explained, relatively easy: Biden can reverse Trump’s orders with just a signature.

Analyst and former Cuban ambassador to the European Union Carlos Alzugaray agrees on this. He believes that some sanctions “will quickly go if it isn’t necessary to wait” for the island to be taken off the list of sponsors, although he warned that the supporters of maintaining them, like Republican Senator Marco Rubio, will argue that the target was the military.

IN FAVOR: INTERNATIONAL SUPPORT AND A SMOOTH PATH

The most compelling factor for Biden to reach out is that this policy, according to LeoGrande, was not only more effective, but most  Americans, businessmen—especially the agri-food sector—and Washington allies support the understanding.

There are also issues in which bilateral collaboration is essential, such as the fight against drugs, migration and the Venezuelan crisis, he listed.

Alzugaray agrees and believes that the decision “would be welcomed by the majority of key allies and countries in the region such as Argentina and Mexico.”

He also recalls that Obama tread the path when he reestablished diplomatic relations, signed 22 agreements still in force and sealed his legacy with a directive that can be restored.

“It would be a clear sign with little political cost that the U.S. is returning to the ‘soft power’ policies and leaving behind Trump’s coercions,” said the former diplomat.

Another argument, supported by Cuban Americans, is the need to normalize consular services to unblock immigration agreements, visas, and family reunification programs.

Health cooperation to face COVID-19 would also be a factor in favor, with the antecedent of joint work in Africa against Ebola, recalls Carlos Alzugaray.

AGAINST: HUMAN RIGHTS AND VOTES IN FLORIDA

The factors against are summarized in the figures—some powerful—that systematically oppose a rapprochement as long as the island does not advance in democracy and human rights, conditions that “they know perfectly well Cuba is going to reject,” said LeoGrande.

He recalled that some Democrats also fear the electoral cost in Florida, where Trump garnered more Cuban-American votes in 2020 than in 2016.

“The Democrats will never outperform the Republicans when it comes to a hard line with Cuba. Instead, they should appeal to the growing Cuban-American segment that supports reconciliation,” he said.

Alzugaray also is of the opinion that this electoralist vision harms a rapprochement in which Biden would have to “invest political capital to cushion the consequences with sectors of his party such as Senator Bob Menéndez from New Jersey, and some Republicans.”

And “in the grand scheme of things,” with the many open fronts that the new president has, “perhaps Cuba is not a priority,” he pointed out.

“If he does it separately in a context in which the U.S. continues to be overwhelmed by the crisis of the pandemic, it could be interpreted as a lack of adequate priorities,” López-Levy also warns.

WHAT DOES CUBA SAY?

Despite the escalation of hostility, Cuban President Miguel Díaz-Canel has reiterated that his country will dialogue as long as Washington does not expect political concessions and relations are based on common interests.

The latest gestures, however, don’t go in that direction. Havana has not yet congratulated Biden—at least publicly—, the Cuban and Russian foreign ministers spoke by phone a day after the Democrat took office, and the rhetoric of the state media is not very friendly.

“If there is no secret contact, many people have the feeling that Cuba’s response is ambiguous. The media associated with the government seem to be suffering from ‘post-Trump’ traumatic shock and not giving Biden the warm welcome like other countries,” said Alzugaray.

In contrast, a new head of mission, Lianys Torres, has arrived at the Cuban embassy in Washington these days, a diplomat whose long experience and good spirit have been highlighted by experts on the island’s politics.

Although the Democrats have taken over the White House and both Houses, the prospects for Biden to lift the embargo in force since 1962 and codified in the Helms-Burton Act (1996) seem distant.

For Biden, LeoGrande said, a lot of political capital would be at stake in an issue with opposition not only from the Republicans, but from members of his own party such as Menendez or Congresswoman Debbie Wasserman-Schultz, among others.

“Repealing it would require the vote of two thirds of both houses, it is almost impossible,” agrees Alzugaray, who suggests that an alternative that would deliver a “lethal blow” to the embargo would be to pass a law that gives Americans freedom to travel to Cuba.

According to López-Levy, “the logical thing would be for the president to look for ways to give licenses to ‘open holes’ in the embargo, creating publics interested in its dismantling and who pressure the Legislative, as Obama was doing.”