The document urges President Biden to make effort to “normalize bilateral relations and eliminate the embargo in its entirety.” 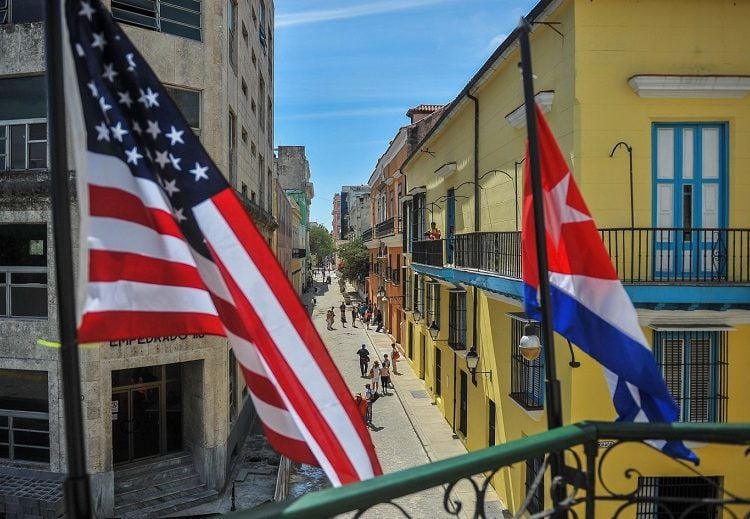 Cuban and U.S. flags on the facade of the La Moneda Cubana Restaurant in Havana. Photo: Yamil Lage/AFP/Getty Images.

The United States Agricultural Coalition for Cuba (USACC) asked President-elect Joe Biden to resume the policies that develop relations between the agricultural sector of both countries, reported Cubadebate.

According to the source, the petition, dated January 14, states that the sanctions harm the Cuban people and that lifting them can contribute to “important economic and humanitarian benefits.”

Signed by 24 member groups of the USACC that lead the U.S. Rice Federation, the National Corn Growers Association and the American Soybean Association, the letter also proposes that farmers, companies, private organizations, NGOs and universities in the United States work with Cuban counterparts on the challenges of increasing productivity, adapting to climate change, and building solid business strategies.

The document highlights the possibilities that the island’s private sector now has to import and export, as well as recalls the invitation made by the island’s government to foreign investment in private agricultural cooperatives, “which represents an opportunity for Americans to help the growth of this sector.” It also urges President Biden to make an effort to normalize bilateral relations and eliminate the embargo in its entirety.

The Agricultural Coalition also requests that early measures be taken to restore the Cuban Assets Control Regulations (in force since January 20, 2017) and suspend Title III of the Helms-Burton Act, important regulatory steps for agriculture in the United States and companies in general.

Established in January 2015 with the aim of promoting the development of agricultural trade between the two countries, the U.S. Agricultural Coalition with Cuba brings together American associations, producers, study centers and universities.