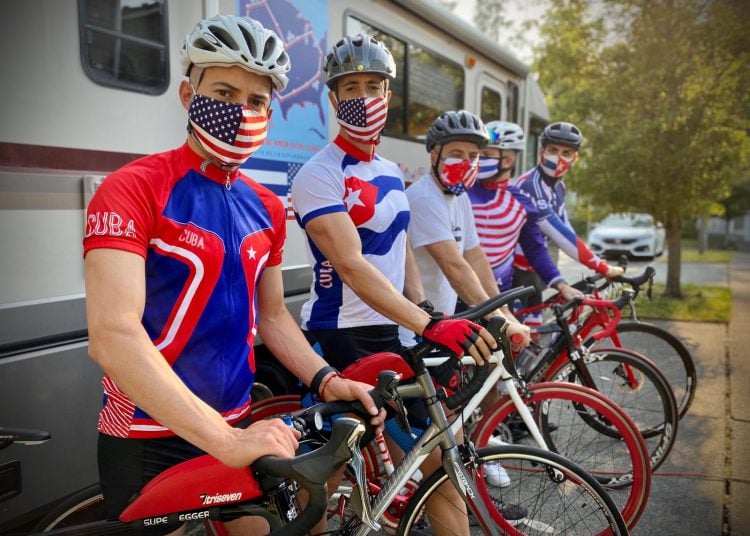 Carlos Lazo (center) arrived in the United States in 1991. Photo: Courtesy of the Carlos Lazo.

A group of Cubans residing in the United States led by teacher Carlos Lazo arrived in Washington on Wednesday, the goal of a trip of more than 5,000 kilometers by bicycle to ask the U.S. government to end the blockade on Cuba, Cubadebate reported.

Carlos Lazo intends to “speak with the President of the United States or with whoever listens to us,” as in an initiative, to build “bridges of love” between the island and the United States.

The teacher, who arrived in the United States on a raft in 1991, addressed a letter to President Donald Trump calling for the lifting of economic sanctions against Cuba, aggravated by the crisis caused by the COVID-19 pandemic, according to the source.

The group of bikers left from Seattle more than 20 days ago to cover the coast-to-coast route of the United States.

Before leaving, Lazo announced on his social networks: “The time has come. We’re going to the White House. We will cross the United States, from coast to coast, by bicycle. It will be like pedaling five times the distance from Havana to Santiago de Cuba. And although our route does not pass through El Cobre, Our Lady of Charity―our Cachita!―will be with us.”

He then explained that they would visit towns and cities. “We will speak to the men and women of the United States, which is also our nation: blond, black, mestizo, Republican, Democrat, regardless of race, creed, or ideology. In every corner of the Union that we visit, we will advocate building bridges of love between our two peoples.”

Along the way, he wrote to Trump and Biden with the same request: “respect and love for Cuba.”

Weeks before, he had sent a letter to the White House for it to consider lifting, “even if temporarily, some of the economic sanctions that weigh on the people of Cuba.”

The petition was accompanied by a campaign on Change.org that obtained more than 20,000 signatures, but so far they have received no response.