OnCuba is reproducing Lazo’s response to the Florida senator, who in a letter asked the FBI “to determine if Lazo is acting as an unregistered foreign agent of the Cuban government,” according to a report by El Nuevo Herald. 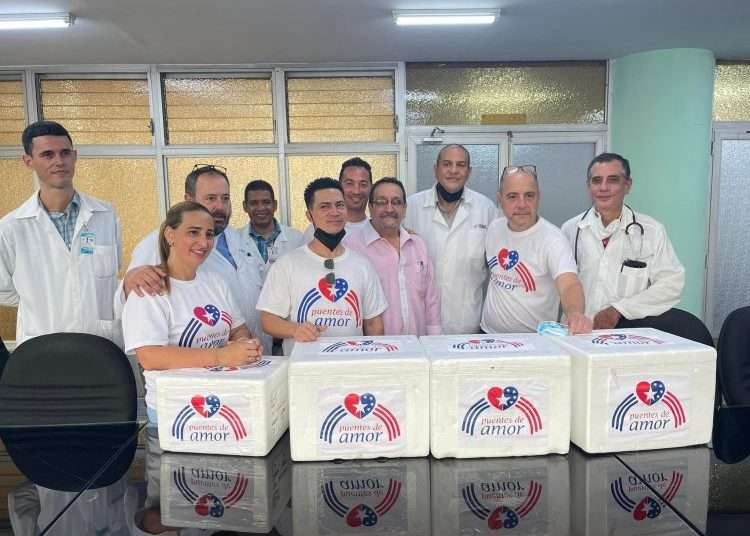 Cuban émigrés from the Bridges of Love project deliver a donation to Cuban health authorities to reactivate the liver transplant program for children, at the William Soler Hospital in Havana, on May 22, 2022. Photo: Carlos Lazo’s Facebook profile.

Carlos Lazo, Cuban-American activist and organizer of the anti-embargo group Bridges of Love, replied to Senator Marco Rubio, who on Monday asked the FBI to investigate said movement for its meetings with Cuban President Miguel Díaz-Canel, the last of which occurred last June.

OnCuba is reproducing Lazo’s response to the Florida senator, who in a letter asked the FBI “to investigate if Lazo is acting as an unregistered foreign agent of the Cuban government,” according to a report by El Nuevo Herald.

In this letter, Rubio urges FBI Director Christopher Wray to investigate the members and check the activities of Bridges of Love, stressing that the group has “known associations with the Cuban regime.”

According to this report, the Republican senator’s letter comes after Bridges of Love demonstrated against the embargo last Sunday in Coral Gables, a fact that, according to Rubio, is “part of a coordinated effort by the Cuban regime to sow division, incite conflict, and influence the foreign policy of the United States.

“The Foreign Agents Registration Act imposes disclosure obligations on persons and entities that work as ‘agents,’ acting under the direction of foreign governments or organizations. Activities that require registration include political work intended to influence U.S. foreign policy.”

About Senator Marco Rubio’s attempt to get the FBI to investigate members of the Bridges of Love humanitarian movement and war veteran and professor Carlos Lazo.

I want to thank Senator Marco Rubio. I never thought a U.S. senator would take notice of our movement and lift us up like he has, calling for an investigation of Bridges of Love and its members. By the way, I want to say that I’ve been talking to the FBI for several months now. We have received death threats, against me, against my family, and the FBI has been aware of this for a long time. I welcome any inquiry. We act transparently. I am a teacher, a U.S. war veteran, who did the most I could have done for my adopted country, the United States. And I wonder what Senator Marco Rubio has done in this regard, in addition to speaking there in the Senate and almost always siding with sad causes for the peoples of Cuba and the United States and for humanity, such as asking for more blockade for Cuba or that relatives cannot visit each other.

Senator Marco Rubio accuses me of meeting with President Díaz Canel. I will meet with whomever I have to meet to ask for the sanctions against the Cuban people to be lifted and to ask for better relations between my native country, Cuba, my mother, and my adoptive country, the United States, my father. In the past I have met with Senator Mel Martinez, with Congresswoman Ileana Ross/Lehtinen, with Congressman Dan Burton (co-sponsor of the Helms-Burton Act) and I had a little respectful dialogue with Senator Ted Cruz. And I would also meet with Senator Marco Rubio to explain these issues to him, because he has never been to Cuba, he does not know the Cuban family, he has never walked the streets of Havana.

I have always been more than transparent on this subject. I have always told my truth, clear and smiling. There is no contradiction in being Cuban-American and wanting the best relations between the two countries. Who has suffered for more than 60 years the policy of sanctions is the Cuban family. That’s why I would meet with any person, with any leader to look for that.

I have tried to deliver this message to and meet with both President Trump and Biden and have been unsuccessful, and I ended up meeting with a State Department official.

I ask the media to make this response public. It is probably others who should be concerned with an FBI investigation. We are not the worried ones. We are men and women, Cuban Americans or not, who ask for peace and love.

What has been our “crime”? To take powdered milk to pediatric hospitals? To take syringes for the pandemic vaccination campaign? To take Custodiol so that liver transplant operations can be performed on Cuban children who require it? This is what we do and many other organizations do.

To Senator Marco Rubio, again, thank you for lifting us up. I hope that the FBI takes action on the matter and does an investigation, because many things are going to come out, but not precisely about Bridges of Love and its members, but about people, haters, who are constantly trying to sabotage any understanding between our peoples.

We are going to continue fighting. I am a United States war veteran, I am a combat medic. I made the ultimate sacrifice which is to go to war for my country.

The sanctions that punish the Cuban people have to be lifted. A future of love and understanding is possible between the peoples of Cuba and the United States. Love will defeat hate. Sooner rather than later, we will build those #BridgesOfLove.