Can we reconcile this isolationist political profile of Cuban-Americans with a seemingly profound desire to stay connected to friends and relatives? 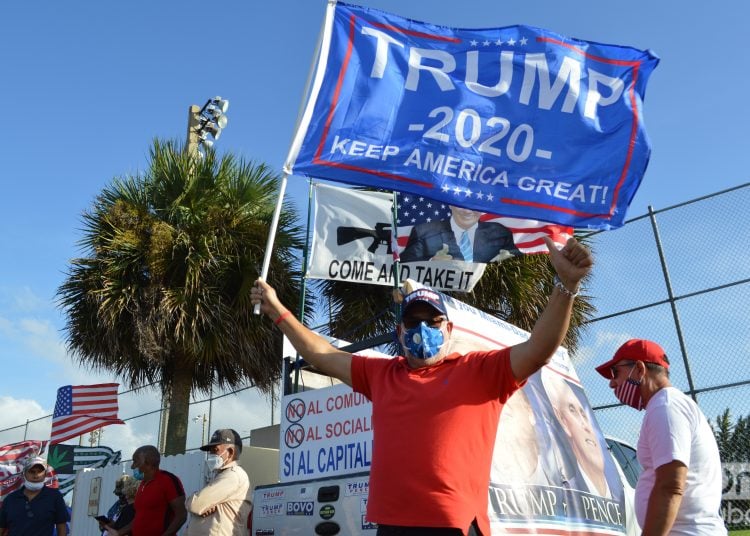 Every four years Cuban-Americans in Miami become “los bravos de la pelicula.” Heroes of a movie running since the Cold War year with little updating. Politicians and their posses descend on South Florida talking tough about Cuba and make promises about what they will do about its deviant government. It is as if Cubans care about nothing else other than US/Cuba policy and they only care about this every four years. Cuban-Americans play their role well and predictably. After some tension about whether generational shifts or the rising new waves of immigrants will change the political calculus, the hardliners reassert their domination. The cries for a “Cuba Libre” echo off the class walls of the Versailles restaurant. The Republican Party triumphs. The Democrats say ‘it is what it is.’ The end. To be continued.

For close to thirty of those long years I have conducted the FIU Cuba Poll, usually during these periods when everyone wants to know how Cubans are going to vote. Our poll tries to understand the attitudes of Cuban-Americans about U.S./Cuba relations and other ancillary policies linking the South Florida diaspora to the motherland. The tension between supporting policies of engagement or policies of isolation is always present. The desire to see change on the island, and to be players in that change, is palpable. Some want help from the almighty U.S. government to promote political changes. Other want to be catalysts for micro economic changes, starting with their families. Some want both.

Certain long-established patterns maintained themselves in the latest poll, released on October 2. The desire for engagement is alive in the community but is frustrated by a lack of clear policies allowing for its expression. A majority of Cuban-Americans support policies that facilitate the selling of food and medicine to the Cuban people (69% and 74% respectively), maintaining diplomatic relations with the Cuban government (58%) and promoting strategies designed to improve the economic well-being of the Cuban people (78%).  Over 70% of Cuban-Americans in South Florida have family on the island, so the interest in maintaining ties is hardwired, particularly among the most recent arrivals. Over 50% percent travel to the island and 48% send remittances to keep these ties alive and a large majority (65%) would like the airline industry to open routes to all parts of the island, not just Havana. Perhaps the question which most reveals the sensitivities of the community deals with the humanitarian crisis thrust upon us all by the Covid-19 pandemic. The community overwhelmingly supported, by 60%, a temporary suspension of the sanctions imposed by the nearly sixty-year-old embargo to help Cubans deal with the humanitarian crisis.

All of these behaviors and opinions provide evidence of a real desire to keep bridges open between the south Florida diaspora and the island and a craving to be involved in the improvement of conditions on the island. Yet, the community has become more intransigent, and more Republican since the election of Donald Trump. In spite of the desire to suspend sanctions during the pandemic, support for the embargo, after plummeting to 34% during Obama’s second term, is today 60% among Cuban-Americans in South Florida. This is the highest support level since the Bush years. Also for the first time since the Bush years, support for allowing regular travel for all Americans to Cuba declined below 50%. Isolationism is trending in the community.

Support for the Republican party, a party that holds steady in its isolationist approach towards Cuba policy, has been on an upswing since the election of Trump. In a survey of Cuban-Americans released two days after the 2020 FIU Cuba Poll, the PEW Research Center reported that 58% of Cuban Americans nation-wide are registered or lean Republican. Our poll reported a resurgence of the Party among Cuban-Americans, now representing 53% of registered voters after years of weakening during the Obama administration.

Can we reconcile this isolationist political profile of Cuban-Americans with a seemingly profound desire to stay connected to friends and relatives? At least two dynamics are at work in creating this apparent contradiction 1) the importance of the rules of engagement established by the leadership in Washington and 2) the pervasive presence of the Republican Party in the Cuban-American community.

Looking at the pattern established over the years by responses favoring engagement or isolation, it is clear that leadership matters. That is, the policies adopted by Washington towards engagement or isolation have a significant impact on community sentiments.  Put simply, policies established by Washington are followed by a majority of Cuban-Americans. This pattern of increase support for engagement during Democratic administration and an increase in isolationism during Republican leadership goes back to the George H. Bush administration but the profound changes initiated during the Obama administration provide the most compelling evidence of the importance of leadership on shaping the attitudes of Cuban-Americans towards US/Cuba policy.

When Obama changed the rules of the game by opening up diplomatic relations, travel and significant economic activity with the island, some protest was heard but soon the community adjusted to the new normal. Over 64% of Cuban-Americans supported the engagement initiatives, according to our 2016 poll. The opening of travel to all Americans as well as support for increasing American investment on the island received 60% support across the board, except for the oldest exiles. Support for the embargo plummeted to the record low of 34%.  A real shift in community attitudes occurred during the Obama years, reflecting the new normal established by Washington leadership.

The Obama years also restricted the oxygen available for the hardliners within the Cuban community in South Florida. They didn’t disappear, the hardliners, but the Obama policies muted their ability to define the parameters of what it means to be a Cuban American in Miami. Large sectors of the community, particularly the young and the newest arrivals, received “permission” to re-engage with their homeland. Many took advantage of the rapprochement and visited the island, some for the first time. Many came back lauding the dramatic economic changes unfolding as a result of the now permissible interactions. At long last Cuban Americans were having an impact on Cuban society. Improving the economic well-being of the Cuban people was viewed, even by some hardliners, as a catalyst for change; the grafting of middle-class aspirations on a stagnating economic system that might give rise to a deep restructuring of the Cuban state.  The Obama engagement policies became a political Rorschach test flexible enough to be useful to those desiring regime change as well as those who just wanted to spend holidays with family and send diapers to their nephews.

The policy rollback imposed by Trump gave old isolationist policies new wings and isolationist ideas new oxygen. Trump’s assault on engagement started immediately after his inauguration in 2017 and resulted in policies that have changed the rules, once again, about what it means to be a Cuban-American in South Florida. Today, the voices of those who supported the channels opened by Obama are shaky. While most of the post 1995 migrants cling to the remaining “salva vidas,” linking the two sides of the Florida Straits (remittances, social media linkages) the network established by Obama is fraying and the fragile relationships, in this age of COVID-19, are difficult to maintain. There are no flights, there are no economic channels to promote change, diplomacy is at a standstill. There is little to build on. The hardline is the only line as Trump works to erase the Obama footprints from the beaches of Cuba.

We also have to realize that Cuban-American do not make base their political decisions based only on a party’s view towards Cuba policy. Cuban-Americans have other things on their minds. When asked to rank the personal importance that they give to specific policies initiatives, Cuban-Americans consistently rank U.S./Cuba policy last. We saw this in the 2018 poll when we asked respondents to rank eight policies according to their importance in motivating them to vote for a specific candidate (the economy and jobs, health care, gun control, taxes and spending, immigration, foreign policy, terrorism and Cuba policy) and in this year’s poll, when we asked respondents to rank the importance of six policies independently, on a one to five scale, with 5 a measure identifying the issue as being extremely important to them. The economy and healthcare policies led the pack (4.76 and 4.68) with race relations and immigration a distant third and fourth (4.09 and 4.04). Cuba policy came in dead last, slightly behind China policy.

So it seems unlikely that any individual Cuban-American will vote for a candidate, or follow a party, purely because the views on U.S./Cuba policies coincide. Yet, Cubans still are misunderstood as being one issue voters. As if they’re clinging to an exile ideology obsessed with setting things right in the homeland to which they all desire to return. And some Cuban-Americans perform this role well. They cheer when candidates promise a Cuba Libre in Miami, as Pence did in a recent visit and are easily riled when Republicans associate policies promoted by Democratic candidates with “socialism” even though the most progressive Democrats fall far short of calling for the type of social protections incorporated into the famous 1940 Cuban Constitution held as sacred by many old timers.

Our poll shows that over sixty percent of arrivals since 1995 left Cuba to improve their economic well-being, not for political reasons, but once here, the script is one-size-fits-all. We play the part of a community obsessed with US/Cuba foreign policy because our history is in this country has been shaped directly by the geopolitical twists and turns of this policy. We tease politicians who assume that to get our vote they must recognize us as allies and soldiers in a geopolitical struggle of enduring significance.

Cuba Libre is the “promise.” And the Republican party is the king of “Cuba si, Castro (or Diaz Canel) no.” Cubans-Americans respond. We cheer and vote Republican. And analysts and observers are forced to craft an explanation about why social change does not occur, not in Cuba, but in Miami. Sadly, I think that part of the answer is that Cuban-Americans are easily manipulated. The manipulation is choreographed by the Republican Party but only because the Democrats long ago gave up trying to feel the rhythm of the conga.

*This article was originaly published in Progreso Semanal, OnCuba shared a version edited by the author himself.