For Cuban-Americans, the Republican approach to US policy towards Cuba is just icing on the cake. 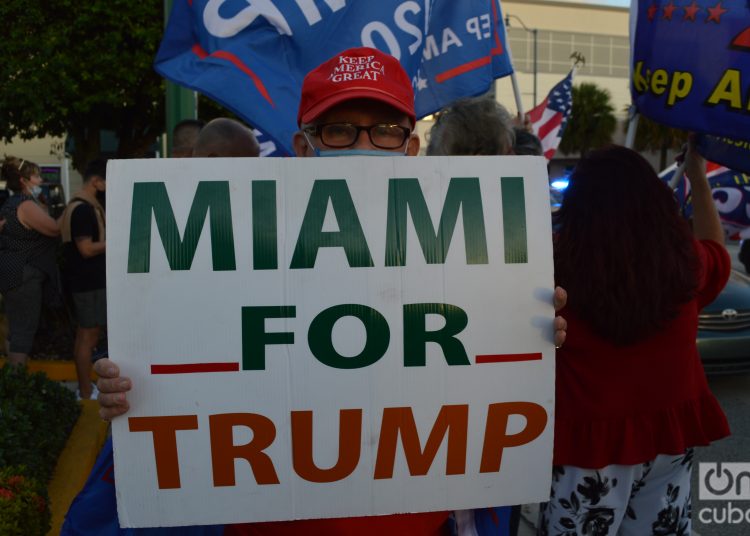 Part I of this text was published previously by OnCuba.

The two parties are not created equal as far as Cuban-Americans go. Since the 1980s, when President Ronald Reagan recruited the Cuban community in Miami to assist in his war against the Evil Empire and serve as surrogates in the suppression of the Nicaraguan Revolution and others that might follow, the Republican party has known how to appeal to Cuban-Americans. How to make us feel special. The Republican party has been building its Cuban base since those years when Jorge Mas Canosa worked hand in glove with the party in providing Cuban-Americans a network which allowed politicians to gain power and businesses to make money. But they didn’t build the base talking about Cuba policy. They built the base by turning exiles into citizens.  They built the base by responding to the needs of the elderly population by supporting  “comedores,” elderly dining halls, to deal with their nutritional and social needs, by providing career paths for young professionals, by assisting constituents in filling out immigration paperwork, insurance and social security claims, by offering internships to their kids and job referrals when necessary or small business loan recommendations. The Republican party built its base assisting Cuban-Americans in resolving their daily problems; by dealing with the daily “achaques”; addressing the economic and health care concerns of their constituents and other preoccupations that arise from being an immigrant in the United States. The Republican base was built by putting boots on the ground to register voters who saw that belonging to the Republican party benefited them.

The question of “big government” vs “small government” has never been the question. The question is what party uses government to benefit the Cuban American base in its life as immigrant, not as exiles. In fact, Cubans have benefited greatly from U.S. federal government largess through the years, primarily, and ironically, during Democratic administrations.

Most of the migration accords and their legal armature have been erected by Democratic presidents. The Cuban Refugee Program (1961), Cuban Adjustment Act (1966), Senator Lawton Chiles (D-FL) pushing through legislation ensuring that Cubans will be eligible for the Supplemental Security Income (SSI) program (1975), the Helms-Burton Act (1996), which in all likelihood inhibited President Obama from lifting the embargo, the signing of the 1995 Immigration Agreement, which facilitated the migration of hundreds of thousands of Cubans to the United States. Even the implementation of the embargo, around which swirls such symbolism and passion, occurred during a Democratic administration (1962).

Perhaps because of this consistent and expected support received from the U.S. government, Cuban-Americans do not see a contradiction with supporting Trump and his party while at the same time showing up with the highest per capita Obamacare enrollee numbers in the country. The Republican party gets credit for not dismantling the program rather than the Democrats for establishing it. And if they dismantle it, no worries. The Republicans will always take care of Cuban-Americans, one way or another. Decades of developing and organizing the base has established a deep and solid foundation within the community. The Republican party has become a source of Cuban-American identity.

I witnessed the creation of the Republican Matrix firsthand when I was director of the Center for Labor Research and Studies at FIU in the late 80s and throughout the 1990s.  I worked closely with the Cuban-American labor leaders, all of them Democrats, and witnessed how the Cuban-American Republican representatives in Tallahassee worked with labor and its members on economic and social issues. At one point I analyzed the voting record of Cuban-American representatives on labor issues and was astounded to find their voting record to be almost as pro-labor as their Democratic counterparts statewide and much more than Republican colleagues. The topic of Cuba as a foreign policy concern was tangential to the party’s presence in the community as a problem solver.

More recently, new arrivals from the island, not having a historic view of political culture in the United States, or of the contradictions between the Republican “small government” rhetoric and “big government” benefits history has bestowed on Cuban-Americans, see in Trumplandia an in-your-face Republican Party that is empowering in its iconoclastic, patriotic arrogance. Trumpism fills the “patria o muerte” (motherland or death) void created but not filled by the Cuban ethos. With Trump they are riding a history-be-damned wave sweeping the country and the world. Our poll shows, for the first time since we’ve been keeping records, that the new arrivals are registering Republican rather than Democrat or Independent (No Party Affiliation) to the tune of 76%. They see the Matrix created by the Republicans in Miami and it is good.

The Cuban American allegiance to the Republican party does not hinge on its foreign policy stance towards Cuba. The sad fact is that Cuba simply has not been important enough to any Republican or Democratic president (before Obama) to risk upsetting the devil-you-know status quo of belligerent policies and hostile rhetoric. But the Democratic party, which has been cast by the peculiarities of American capitalism as representatives of the “working class,” to which by all objective measures Cuban-Americans belong, has considered the Cubans a lost cause. Belonging to the Democratic party, for your average Cuban American, has always been a conflictive situation. And the Democrats have never figured out how to penetrate the community.  Part of the reason has been because the Democrats have bought the line that Cuban-Americans care about U.S./Cuba policy above all else.  So candidates come to appeal to Cubans on their knees, assuring them that they are not socialist, that they will deal with the human rights abuses in Cuba, that they understand Cuban-Americans’ concerns.  In other words, they come to talk to Cubans using Republicans talking points. But only Republicans can get away with the duplicity of talking tough and doing nothing on Cuba because for decade they dealt with the actual problem that Cuban-Americans face every day, not just once every four years.

For Cuban-Americans, the Republican approach to US policy towards Cuba is just icing on the cake. A very elaborate icing, with predictable flourishes and decorations but one that sweetens a cake that has been mixed and baked year-round, year after year, boots on the ground, servicing and developing a solid constituency which associates party allegiance with its identity and which results in the community gifting the Party with the kind of resounding support that reverberates throughout the entire Cuban-American culture in South Florida; from young to old, from ancient exile to off-the-boat economic migrants.

Obama’s success in changing U.S./Cuba policy came with the assumption that he could ignore the Cuban vote and change history. That the political price to pay for establishing relations with Cuba was insignificant in the grand scheme of things. That he could ignore Cuban American opinions for the sake of national interests which extended not only to Cuba but to the Latin America. He led with his commitment to establish new ways of creating change on the island and, lo and behold, most of the Cuban American community followed. Some eagerly and some dragging their heels, but he built a new Cuba policy and they came. Whether you agree with his approach or not, whether you think that the changes brought about in Cuba and the diaspora in two short years were sufficient, you have to admit, he engaged with Cuba and Cubans directly and more effectively than any president in the last six decades, Democrat or Republican.  Ordinary Cubans on the island and in Miami saw themselves, the United States and the Cuban government differently and the behaviors of individual and institutional actors were altered.  But what he lacked throughout was the concomitant commitment of the Democratic Party to establish a beachhead in the Cuban-American community. Since the new normal “proved” that the community could be ignored when it came to changing foreign policy, its presumed “core issue,” this was interpreted as a sign that the community could be ignored, period. This disregard made it easier for Trump to rollback most of Obama’s opening without incurring any political cost. Maybe I’m being too rough. Maybe there’s a plan. If there is, it’s not working.

Imagine if Hillary Clinton had won the election and had maintained the engagement policies towards Cuba. We would not be talking about the importance of the Cuban-American vote in the coming elections, at least not like this. The symbolic rhetoric of the looming “socialist” threat posed by Democrats would not be a Republican talking point. Given the results of the 2020 poll, where Cuban Americans, even at the height of its Trumpism, still support policies designed to directly assist the economic empowerment of the Cuban people, I believe that the discussions surround U.S./Cuba policy in South Florida would be different than today’s discussion. Had the White House remained in Democratic hands, and with the resulting election of a couple of Democratic congressional representatives in South Florida, we might be talking about how well the Democrats have performed on the ground as representatives of Cuban-Americans. Or about how specific U.S. foreign policies towards Cuba have addressed national interests or even the narrower interests of Cuban-Americans. Or how the needs of Cuban-Americans are being met or neglected by the American two-party structure. A structure that has always approached the Cuban-American community with immeasurable cynicism and contempt. We are not considered to be fully developed citizens of this country. And, sadly, that seems to be fine by us.

To many in the two-party structure, we are the eternal “exiles,” more interested in our country of origin than in this one. Predictably irrational in protecting the “patria chica,” the small homeland crafted from memories and resentment. We never forget and we never learn. We live in a fantasy land, a bubble called Miami. A liminal space existing in some Cold War time warp equidistant from contemporary Cuba and the United States where Cuban-Americans are taken for granted and manipulated; left to linger “in the gruesome quiet of an entirely imaginary world,” in the words of Hanna Arendt. Stranded on the eternal beachhead of a political Playa Giron where victory is simultaneously assured and impossible to achieve. A place where we long, with our parents and children, for a future that will help explain our past. Where we agree with Julio Antonio Mella, not knowing who he is or what he meant when he said what we too know to be true, if only because we see the present as inadequate: “Todo tiempo futuro tiene que ser mejor.” The future is always better.

*This article was originaly published in Progreso Semanal, OnCuba shared a version edited by the author himself.