The Cuban-American vote in Florida was divided. It went up three points from the previous election and, although it had an influence, it did not determine the elections in Florida. 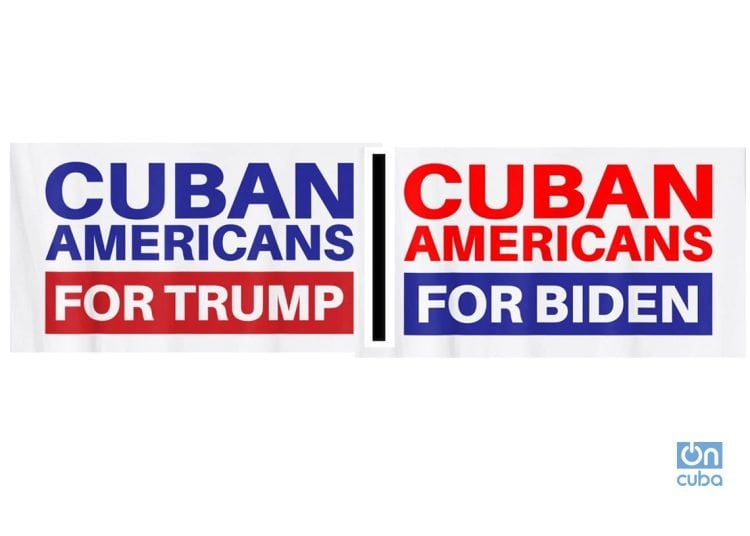 The Cuban-American vote in Florida went up two or three points in relation to the 2016 presidential elections, according to exit polls.1,2 This contrasts with the Latino vote, where Joe Biden lost 10 points of advantage compared to what Clinton achieved in 2016. It can then be affirmed that, although the Cuban-American vote had an influence on Donald Trump’s victory, it was not as decisive as the rest of the Latino vote may have been.

According to a study by the Pew Research Center, the largest amount of U.S. citizens of Latino origin in the United States live in the states of California, Texas, Florida, New York and Arizona (in that order). By districts, Florida’s 26th has the fifth largest population of Hispanics with the right to vote.

Results of presidential election in Florida

According to The New York Times exit poll, white men, with no college degree, and over 30 years of age voted overwhelmingly for Trump in this presidential election in Florida, following the pattern of the previous one. The current president significantly raised the percentage of votes in his favor in the group of Hispanics/Latinos and in the group of people between 30 and 44 years old. Meanwhile, Joe Biden increased the Democrats’ percentage advantage among women, whites, blacks, college graduates, and people 45 and older. The only place he significantly reduced his party’s advantage in Florida was in the Latino vote.

There are 3.1 million Latinos living in Florida, more than 2 million with the right to vote. According to the Cuban Poll 2020 estimate from Florida International University (FIU), 697,785 Cubans would be registered to vote in these elections in the state. The figure represents 29.3% of Hispanics and 5.02% of all registered voters in Florida. 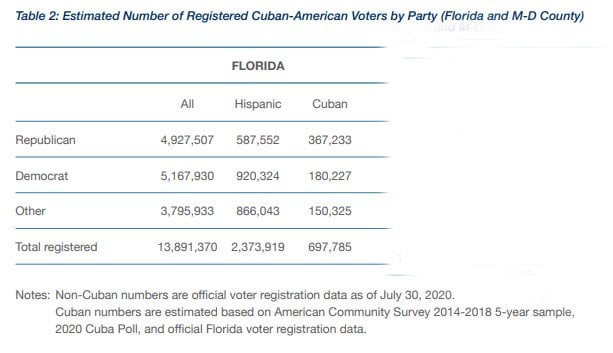 According to the NBC News exit polls, 55% of Cubans in Florida voted for Trump. This was also reported by the American Election Eve Poll, while The New York Times reported that it had been 56%.

Miami-Dade concentrates the largest amount of Cubans living in the United States, according to data reported by FIU 482 306 voters of Cuban origin registered for this election, representing 55.3% of the total registered Hispanics and 32.1% of the total of the registered voters in the county. 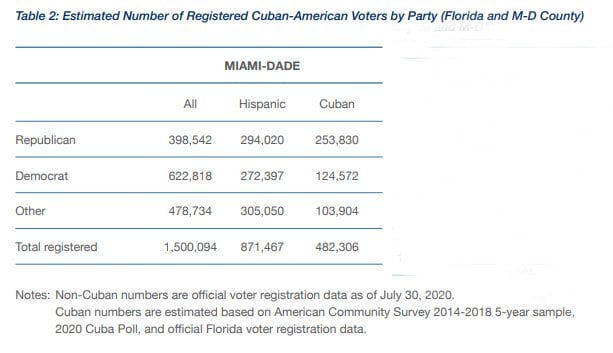 How did the voting behave this year compared to the previous one?

According to the FIU poll, 59% of Cubans were decided voters for Trump, another 10% were undecided. This suggests that, although in Florida in general 52% of the vote of Cuban origin has favored Trump, in Miami-Dade it could have been higher.

Many make a correlation between the Cuban population and the electoral result in Miami-Dade―which is, far from what some think, a traditionally Democratic county: since 1988, no Republican candidate has won it―but evidently it cannot be directly related. Cubans represent about 32% of the vote in the county. The rest of the groups traditionally vote for the Democrats, although that advantage was shortened in the group of other Latinos in these elections, not only in Florida.

Latinos, Cubans, in the 2020 elections in Florida

In these elections there was a decrease in the percentage of Latinos who supported the Democratic candidate, but it must be understood that Latinos are a very heterogeneous group. What is known as the Latino vote in the United States is not a group that can be analyzed as a unitary bloc. In strictu sensu, there no is no “Latin vote.” However, it is proven that people of this origin tend to be more Democrat than Republican, a trend that has increased in recent years, in the 2016 presidential elections and the 2018 Senate and House of Representatives elections. 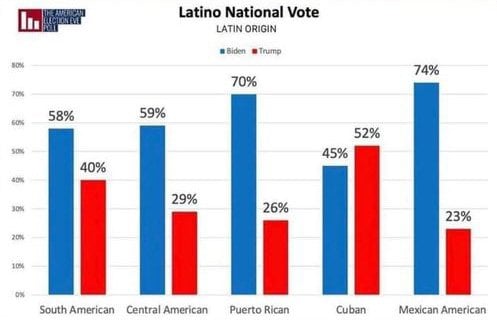 This year the Latinos constitute, for the first time in U.S. history, the most represented minority for the right to vote, with 32 million eligible people. This group represented  13.3% of the citizens with the right to vote in these elections (more than 60 million Latinos live in the United States).

These results require in-depth analysis, but to confirm that the Cuban-American vote did not determine Trump’s victory, a simple count would suffice: if the 697,785 registered voters of Cuban origin in Florida had voted, the 3% increase would mean 20,933 more votes for Trump, which would represent 5.6% of the 373,476 votes that gave him victory in the state.

Miami-Dade County, where the three districts with the largest presence of Cubans are located and where political influence is strongest, deserves a separate analysis. In this county the radicalization, the levels of support for the Republican Party and a hard line against Cuba are evident.

The two seats in Congress lost by Republicans in the 2018 midterm elections were recovered in this election and the campaign in favor of Trump, a president who has increased sanctions, which have been extremely active, on Cuba, affecting even family relations such as flights and remittances.

Republican politicians, with historical and constant work in the Cuban-American community, have also activated their influence because they have an environment conducive to that, an environment of hostility, black lists, intransigence, radicalization and a community that has other priorities and feels pressured. However, in these elections and in line with what is happening throughout the country, a movement of Cubans for Trump could be seen, but also one of Cubans for Biden, which shows that it is a divided community, where not everyone behaves in the same way politically. The defeat of Trump announced on November 7 was suffered by Cubans in Miami, but other Cubans celebrated it in their streets.

1 Results for 2020 according to the exit poll published by The New York Times.

These figures are preliminary estimates from exit polls by Edison Research for the National Elections Group. These polls interviewed voters outside of polling stations or early voting locations, or by phone (to count voters by mail).

Interviews with 5,906 voters were counted. These are preliminary results that according to the NYT will be updated as more data becomes available and will eventually be adjusted to match the actual vote count.

2 2016 results according to the results of preliminary estimates of the exit polls of the National Elections Group in 2016 published by CNN. The answers of 3,997 people were used.