Charter companies face the possibility of traveling to the Cuban provinces through third countries, as was the case some years ago. 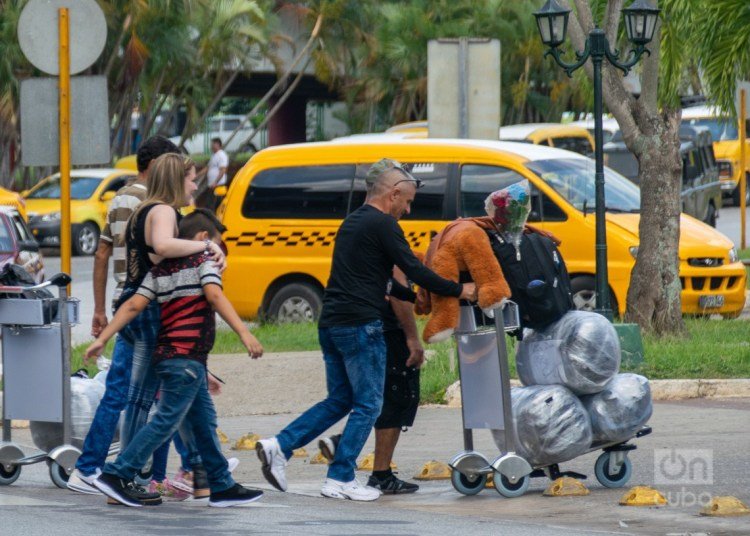 When on January 10 the Trump administration decided to reduce direct charter flights from the United States to nine Cuban airports, leaving just Havana as a gateway, thousands of Cubans protested throughout the United States. But in silence. Not raising a ruckus.

The protests were not like at other times when the community has been affected by something that deeply concerns them. In Miami, nobody took to the streets to protest this enormous harm to family communication; the media also did not echo the dissatisfaction. The same happened in October when the administration imposed the same measure for U.S. airlines’ commercial flights.

The Cubans protested, essentially, in the offices of the companies that rent the airplanes, which, of course, can do nothing. “People have come to protest here and are anxious about what will happen. They are booking in bulk for flights before March 10 (when the closure begins) because no one knows what the future holds in store,” explains Marisol Rodríguez, director of the Marazul company, which flies about 18 times a day to the island.

But no one has taken to the streets or concentrated in front of the offices of Cuban-American politicians who support this type of measures. The director of the Cuban Research Institute (CRI) of Florida International University (FIU), Jorge Duany, thinks that this kind of apathy is due to the political environment surrounding the community and that arouses fear.

“The first factor would be the long tradition of more conservative domination in these last 60 years, during which there have been serious incidents. I would say that they may be afraid although the community has changed, we no longer see the bombings that happened in the 1970s. Miami is still a place where public opinion is dominated by the right wing that opposes the Cuban system,” he says.

But, Duany adds, it should also be borne in mind that “many are not citizens nor have they legalized their situation in this country. Now we must bear in mind that in the last 20 years we have noticed a decrease in public activities. Here the last great demonstration took place during the case of the child Elián González or the death of Fidel Castro. But nothing like the activism that existed in the 1980s, which was much more dynamic.”

Xiomara Almaguer, owner of the Xael charter company, agrees with some of this. “What happens is that people don’t have time to protest in the streets. The really great concern is going to work, taking children to school, bathing, eating and sleeping. I never saw thousands of Cubans in the street except during Mariel [maritime bridge] asking that people to be allowed to arrive.” The Mariel-Key West maritime bridge occurred in the summer of 1980, when about 125,000 people left Cuba.

And she says: “President [George Walker] Bush in his time suspended the trips (2004) allowing them just every few years and everyone went to the office to protest, but there is no organized structure because here the right wing controls that structure, they are the ones who are heard in the press and confuse people.”

Both Almaguer and Rodríguez are clear about one thing: restrictions on flights, both commercial and charter, only harm the Cuban family.

“Forget the business, here the greatest harm is the human issue, which is relegated to the background because the measures hurt the family, they are damaging that bond that is so important. Of course, it has a financial impact, but for me what’s most important is the damage they did to the Cuban family, monstrous, inhuman, it’s against human rights,” underlined Almaguer.

Rodríguez, on the other hand, clarifies that perhaps it is still early to see a major reaction. “For me the human rights of the Cuban family are being violated. But maybe they are not protesting more publicly because they will be waiting for other changes,” she said.

An end to flights?

The “other changes” are just the rumor that Washington could end all flights at once, isolate Cuba from the United States by air.

Last Friday María González was getting ready at the Miami airport to get on a flight to Camagüey. She looked desperate. “I don’t know what will become of my life. I have my parents and my grandmother there and I try to see them every year. I don’t want to even think that this is my last trip. I don’t know what else these people want from us,” she said, referring to the Trump administration.

Since the first October announcement the Miami airport has been unable to cope with the flights to Cuba, which are leaving crowded. “In December we had full flights because people wanted to travel before the application of the measure to commercial flights on December 10. We also sold out the tickets, it was the Christmas season and the end of the year that is always family time,” says González, from Marazul.

During those days, charter flights were the “pinch hitters” when the commercial flights closed. “People came to us as an alternative, it represented an additional expense for them,” she explains.

For the time being the matter remains the same. Pressed by the deadline of March 10, when charter flights to provinces will be closed, they are booking and flying in droves.

“They are trying to take advantage because they don’t know what will happen after March 10,” González says.

By the way, some opposition media in Florida had decreed a total halt on Cuban flights to Cuba for January, but the call doesn’t seem to have succeeded. The Miami airport is still crowded daily.

“I had booked my ticket for January a few months ago. But I want to return by the end of spring. Now these guys tell me that I can only go to Havana, without having any consideration for what it costs me to get to Santiago de Cuba. This is an abuse against Cubans,” said Daniel García, who arrived in Miami six years ago and regularly travels to Cuba with the savings from his work at a gas station in Hialeah.

Most of the travelers with whom OnCuba has talked these days say the same. The answers are almost the same. Words abound, with some insults in the middle, such as “abuse,” “injustice,” “human rights violations.” Some bold ones say this will have electoral consequences.

Analysts and charter owners are on the same wavelength. “I really don’t know what they were thinking, it seems to me that the administration has placed its bet on consolidating the Cuban vote, but it is a wrong bet,” says Duany, from FIU, for whom the Republican vote of Cuban origin depends on the age and year of arrival in the United States.

“All calculation is mathematical. The community has two opposing visions of the links with Cuba. Last year, the survey conducted by the University indicated that those most inclined to approve this measure came in the first wave. The recent ones vote for Democrats or are independent. And they have what it takes to oppose the measure,” he said.

“Let’s hope so!” Xiomara Almaguer said when asked about the electoral impact of the new restrictions. “I think there will be an impact and regarding that we must work against those responsible for this barbarism,” she added.

When on January 10 the U.S. Department of Transportation announced the restrictions of charter flights to the provinces, it specified two things: that the decision is “until further notice,” as happened with commercial flights, but also said that it will soon announce the amount of charter flights that will be allowed daily. It still hasn’t done so.

In 2016 Havana and Washington signed an agreement that flights to Havana have a daily limit of 18, although on several occasions they reached 22 or 23. But at that time there were also flights to the provinces. Now the charter companies find themselves in a tight spot, that is, to transport to the Cuban capital all the passengers that were going to the provinces.

Hours after the announcement, the charter companies started studying alternatives to reroute their flights, but they have collided with a wall: the Department of Transportation has not yet announced the number of flights to Havana that will be allowed daily, none of them knows how many they will be able to make and the aeronautical authorities have not yet reported the number of flights as of April. At the moment, they only have the old quota for March, but that quota is supposed to be partially obsolete as of March 10.

In addition, and not less important, the Cuban authorities have not expressed themselves in this regard. At this time no one knows if the Havana airport has the capacity to receive the possible increase in flights from the United States. An increase counting on commercial and charter flights to absorb the flow of passengers that until now were distributed throughout the provinces. “We still don’t know what will happen to Havana,” Almaguer said.

But they are mulling something, maybe going back to the old days. “People will continue traveling, that is a fact. And to tell the truth, there is an experience of traveling through third countries, something that we would definitely be offering for Cubans to visit their relatives. We are studying the options of opening charter flights to the provinces like that,” explains the director of Marazul.

Right now, there is already a Mexican airline that travels directly from Cancun to Santa Clara. And Cancun is just an hour’s flight from Miami.