Leahy argues that there is a duality in politics. Although work must be done on respect for human rights, this requirement must be extended to all authoritarian countries, said the senator. 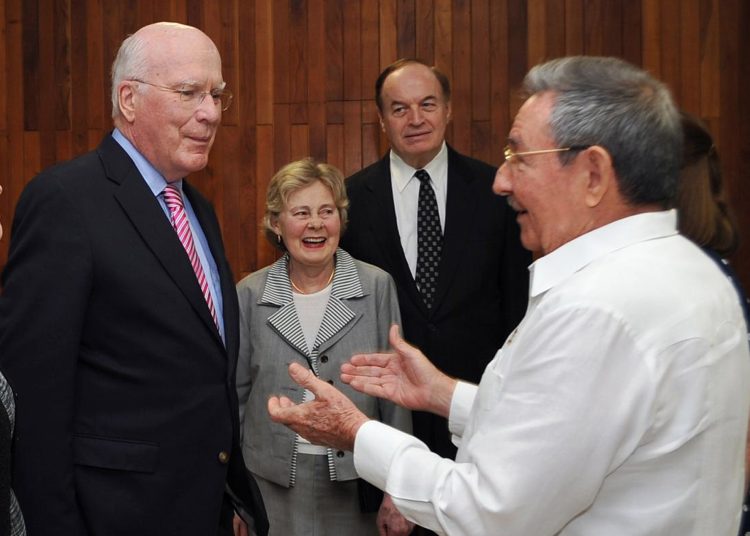 Senator Patrick Leahy, a Democrat from Vermont, talks with then-Cuban President Raúl Castro during a visit to Havana. Photo: Granma/AP/Pool.

Democrat Senator Patrick Leahy believes that the Biden administration’s policy towards Cuba will not yield results and that it should, for a matter of coherence, be extended to other allies with the same characteristics of the Cuban system. The challenge revolves around respect for citizens’ human rights.

“The Biden administration says support for democracy and human rights will be at the core of its policy toward Cuba.  That is a righteous goal, and I hope it does the same for other repressive governments.  But the question is how to achieve it.  Unilateral sanctions almost never work, and they have failed miserably in Cuba,” he said in a statement.

“If the Biden administration conditions our re-engagement with Cuba on steps we know its government will not take and that we do not demand of U.S. allies that are no less and in some cases more repressive, we will perpetuate a policy that has hurt, not helped, the Cuban people.”

Among other things, he said, because “for more than half a century, the United States has imposed a labyrinth of punishing economic sanctions on Cuba, an impoverished island of 11 million people, in an attempt to pressure its government to hold democratic elections.  I certainly share the goal of democracy, but Cuba is no closer to free and fair elections than any time in its history.”

“The Saudi Crown Prince orchestrated the gruesome murder of a respected journalist.  Egypt, a military dictatorship that receives billions of dollars in U.S. aid, has imprisoned tens of thousands of people for their political beliefs.  They should be held accountable, but no one is suggesting that we impose an economic embargo against those countries or demanding that they hold free and fair elections if they want to remain allies of the United States,” said the Democratic senator, known for his advocacy of openness towards the Caribbean island.

And then came Donald Trump, who, declaring that “the Obama policy a failure in order to curry favor with Florida voters, restored and further tightened sanctions.  The result:  Americans’ right to travel to Cuba was denied by their own government, Cuban-Americans’ right to send remittances to their relatives was severely curtailed, Cuban entrepreneurs went out of business, dissidents were arrested, and life got worse for the Cuban people.”

Senator Leahy admitted that, despite U.S. sanctions, Cuba remains a one-party state, but that “it is also changing in a positive way, largely due to demographics and the Internet.”

But all this does not prevent Washington from “being able to actively engage” in the evolution of society. Otherwise, “watch as our competitors fill the vacuum, as they are already doing. There is only one logical choice,” concluded the senator who actively participated in the diplomatic resumption process at the ambassadorial level.

According to two members of the Leahy milieu and the Hispanic Council, this statement (the content of which is not strictly speaking a novelty) is a wake-up call to the current administration due to the incongruity of its current foreign policy and the need for it to be more open in relation to the Island. “We must open the Consulate in Havana. We have thousands of separated families. That is not the democratic spirit,” said one of the sources.