The Trump administration accuses cruise ships of being a veiled form of tourism in Cuba, which is banned for citizens of that country. 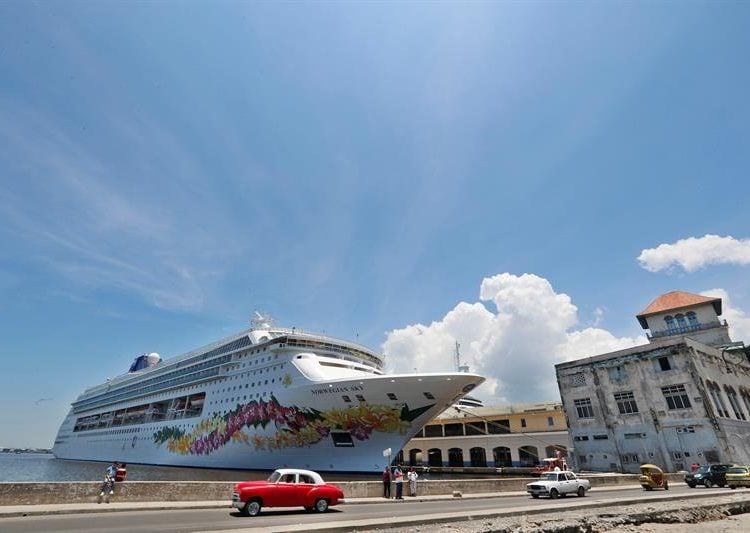 One of the most ambitious plans to establish contacts between the United States and Cuba, which began in 2016, has experienced an unexpected end on Tuesday when the Treasury Department announced the end of cruises to the island, which were transporting thousands of Americans with three- to four-day stays in several coastal cities.

The news was accompanied by another restriction: the end of one of the 12 categories authorized to travel to Cuba, the people-to-people one, in which the passengers of the cruise ships were included. However, the category of “support for the Cuban people” continues, which may seem like it but a license for it is much more difficult to get because it implies that travelers have to keep count of their movements and daily expenses, at the risk of being subjected to an audit on their return to the United States.

In a press release announcing the changes in travel between the two countries, the Treasury Department says that they are due to the need to make it “ineligible for a license exception and to establish a general policy of denial for license applications involving those vessels and aircraft.”

In a separate note to clarify some doubts, the State Department emphasized that Washington “will not allow more visits to Cuba through passenger or recreational vessels, including cruise ships and yachts.”

For the Donald Trump administration this strengthening of the measures is due to what he calls “Cuban interference in Venezuela,” whereby “the United States makes the Cuban regime responsible for the repression of the Cuban people, interference in Venezuela and its direct role in the crisis created by (Venezuelan President) Nicolás Maduro,” which “has created a humanitarian disaster that destabilizes the region.”

At the same time, the end of the people-to-people category responds to the fact that Americans’ trips were transformed into “a veiled tourism, through which the cruise industry has been fueled but also the Cuban military that control tourism there,” a spokeswoman for the State Department told OnCuba.

These measures were advanced by the National Security Advisor John Bolton in a speech in Miami last May where, in addition to announcing the lifting of the suspension of Title III of the Helms-Burton Act, he let drop what just happened.

As William LeoGrande, American University professor and author of the book Back Channel to Cuba, told OnCuba, one can’t ignore next year’s presidential elections and the imperative need to attract Cuban voters.

“This isn’t totally unexpected. Bolton had already referred to it in Miami. Unfortunately, the Republican and Cuban American right wing have always attacked the provision of ‘people-to-people.’ Let’s not forget that Bush did the same,” he said.

In his opinion, what was announced on Tuesday by the Trump administration “limits the constitutional rights of the American people. It will also have a very hard impact on private workers who profited from visitors from the United States.” Neither “is this new. The administration’s aim is to suffocate the Cuban economy, something that began before Cuba and Venezuela were partners,” said LeoGrande.

On the other hand, for businessman Hugo Cancio, president of Fuego Enterprises, at the end of the day it is the people who suffer the most. “The measure of restricting the people-to-people travel category is unfortunate. Even more so, the cancellation of trips via cruises, whose excursions greatly benefited the private sector directly,” he said.

In his view, “the president’s advisers have made a macabre attempt to secure certain votes for Trump’s reelection in 2020. This administration is critical of the Cuban government, but this administration lacks those same values ​​that it criticizes. It is not democratic but dictatorial, it restricts and limits its citizens,” said Cancio, founder of OnCuba.

However, the end of the people to people category does not represent a problem for academic contacts between the two countries, since “until now everything remains the same, you can do research there and take students,” explains to OnCuba the director of the Cuban Research Institute (CRI) of the Florida International University, Jorge Duany.

“All this is because this administration always had the veiled tourism in its sight. Whether driven by the Cuban-American senators and congresspersons, they wanted to close this kind of tourism. First they closed the individual people-to-people trips and now the group. However, it should be noted that they did not interrupt the flights and trips of Cuban-Americans yet,” he said.

After all, Duany emphasizes, “those people who are going to continue traveling, the Cuban-Americans, are potential voters. What happens is that the conservative sectors were the most opposed to cruises, which grew faster than airlines. We have two groups, the old guard that supports this policy and the younger sectors that have more ties with their families in Cuba.”

With the end of the cruises to Cuba since Wednesday, both executives and attorneys from the shipping companies have locked themselves in to study options. The digital magazine Sea Trade News, specializing in the world of cruises, echoed the uncertainty that reigns in the industry in the last hours.

In the new regulations, “we have not found a language that speaks of an exception for cruises or a delay, which means that the measures take effect tomorrow, June 5, and cruise trips will stop immediately. The cruise industry has rushed to decide what to do with tomorrow’s cruise passengers and see if there is a way to get authorization for the ships to follow what had been schedules,” said Collin Laverty, president of Cuba Educational Travel.

Both spokespersons of the shipping companies Msc Cruises and Norwegian Cruise Lines told the publication that they are evaluating the situation, studying the new policy and the immediate impact it will have on its customers. Although in a statement at the end of the afternoon the latter already announced the cancellation of its scheduled trips. In Havana there is a Norwegian Sky, one of its ships that will sail at dawn on Wednesday en route to the Bahamas.

According to recent data from the Cuban Ministry of Tourism, last year about 800,000 of the 4.7 million tourists who traveled to the island, did so aboard cruise ships belonging to 17 shipping companies.

While all this was happening in Washington, in Moscow Cuban Vice President Ricardo Cabrisas received assurances from his Russian counterpart that Russian support will be reinforced “to face the U.S. sanctions,” according to a dispatch from the Russian agency Interfax.

“We will provide all kinds of support,” said Russian Deputy Prime Minister Yuri Borisov, taking into account “the traditional bonds of friendship” and the fact that Cuba is a “key partner” in Latin America and the Caribbean, while recognizing that the situation created by the U.S. restrictions is complex.

Borisov recalled that Russia participates in numerous projects on energy, metallurgy, infrastructure and transport in Cuba and that his country supplies equipment for the development of the Cuban railway and has established contacts for cooperation in the biopharmaceutical sector.