Starting last Wednesday, no U.S. cruise ship is authorized to travel to the island, by order of the government of Donald Trump. 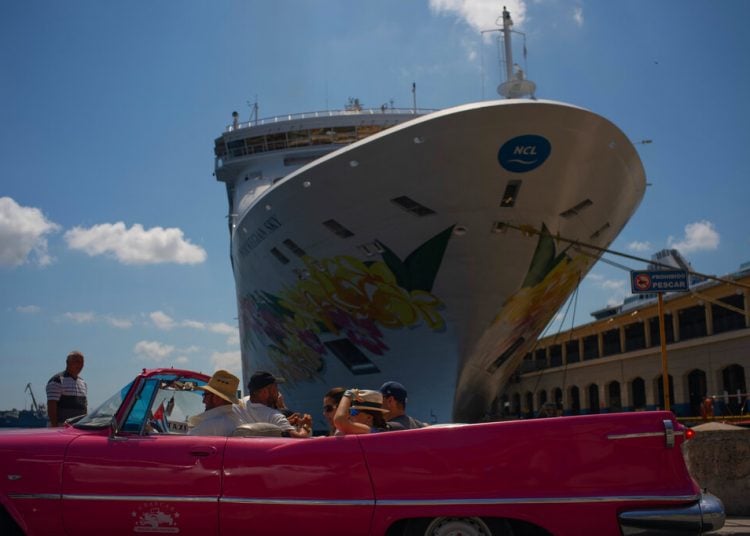 Tourists who recently disembarked from the Norwegian Sky, tour the city in a classic American convertible in Havana, on Tuesday June 4, 2019. The ship sailed this Wednesday in the early morning hours. Photo: Ramon Espinosa / AP.

Yesterday, when the last U.S. cruise ship weighted anchor in Cuban port, another link between the two countries will be cut. And not just any one: figures from the Cuban government show that 142,721 Americans arrived in Cuba just on cruises this year, between January 1 and April 30, more than the 114,832 who came by plane. According to a study by the U.S.-Cuba Economic and Trade Council, cruise lines would have earned more than 761 million dollars in gross revenues between 2017 and 2019 transporting more than 570,000 passengers.

“Carnival stops its trips to Cuba,” “Royal Caribbean changes itineraries of cruises to Cuba,” “Cruises’ ban causes uncertainty among travelers”…are the press headlines this morning. The U.S. government announced that it would ban cruise trips to Cuba, and that the measure would take effect as soon as last Wednesday.

Under the argument of preventing that “the Cuban regime and its military services which control the tourism industry in Cuba have access to U.S. dollars,” this ban condemns to an uncertain future emerging businesses that were fueled by this tourism, from restaurants and souvenir shops to taxi drivers and tour guides: the private sector that Donald Trump says he supports.

Along with the elimination of the 5-year visas, this measure puts Cuban entrepreneurs back in the middle of a crossfire between local limitations and restrictions from abroad. In addition, it intensifies the diplomatic and political crisis between two countries separated by only 90 miles and with multiple issues of common interest.

To understand how these trips happened and how they economically influenced Cubans and the shipping companies, as well as bilateral relations, we reviewed step by step how a solid and mutually beneficial relationship was forged.

July 7, 2015: The U.S. government grants Carnival the first license in more than half a century for a U.S. company to operate cruises to Cuba.

March 21, 2016: The Cuban government approves Carnival trips to the island beginning in May. The cruise company signs agreements with the Cuban companies Havanatur, Consignataria Mambisa and Aries Transporte.

April 22, 2016: The Cuban government announces it will allow those born on the island, regardless of their migratory status, to enter and leave Cuba on merchant ships and cruises starting the 26th of the same month. The measure would authorize the arrival of Cuban-Americans on the first Carnival cruise.

May 2, 2016: Carnival’s Adonia cruise ship arrives in Havana, with around 700 passengers, on a historic journey from Miami to the Cuban capital. Arnold W. Donald, president of the company, thanks the governments of both countries for the opportunity to reopen the sea route.

December 2016: The U.S. cruise companies Royal Caribbean, Pearl Seas Cruises and Norwegian Cruise Line Holdings Ltd. report that they have been authorized by the government of their country to sail to Cuba in 2017.

January 19, 2017: The Pearl Seas cruise ship Pearl Mist arrives in Havana from Fort Lauderdale. This is the second U.S. company to arrive in Cuba after authorization for trips to the island. Its inaugural trip also includes stops in other Cuban ports.

March 9, 2017: The Marina vessel of Oceania Cruises, Norwegian Cruise Line Holdings Ltd., arrives in Havana. Cuban-American Frank del Río, CEO of the company, considers that “these trips are one of the best ways for our peoples – the Cuban and the U.S. – to get to know and understand each other.”

March 31, 2017: The Azamara Quest becomes the first Royal Caribbean Cruises ship to dock in the port of Havana. Less than a month later, on April 23, its second ship arrives, the Empress of the Seas.

November 28, 2017: A symposium on the cruise industry is held in Havana, with several of the world’s leading companies. The U.S. companies reaffirm their desire to continue traveling to Cuba despite the Trump administration’s policy toward the island, contrary to bilateral rapprochement.

December 2017: A report by the U.S.-Cuba Economic and Trade Council estimates the gross revenues of the main U.S. cruise companies for their trips to Cuba between 2017 and 2019 at more than 761 million dollars.

February 14, 2018: Norwegian Cruise Line (NCL) announces increase of trips to Cuba. It will be the first time that the brand offers 7-day or more trips to Havana on cruises.

April 5, 2018: Norwegian Cruise Line Holdings declares Havana as its customers’ preferred destination in 2017, on the first anniversary of its operations on the island. Frank del Río, president and CEO of the company, affirms that “no other destination has become so popular so quickly.”

May 2, 2018: Victory I, of Victory Cruise Lines, docks in Havana after visiting the ports of Santiago de Cuba, Cienfuegos and Trinidad. In this way, it becomes the fifth American cruise company to arrive in Cuba. Its president, Bruce Nierenberg, describes it as “the perfect destination.”

May 15, 2018: Carnival announces the first departure of a cruise to Cuba from Charleston, South Carolina, for the 2019-2020 season. In November it would announce other trips outside Florida: from New York, in the state by the same name, and from Norfolk, in Virginia.

May 23, 2018: Cuban authorities report on an agreement with the Turkish Global Ports Holding to carry out an expansion of the Havana cruise terminal. The works foresee increasing the two current terminals to six in 2024, to respond to the sector’s growth.

August 2018: Havana is selected as the best destination and port in the western Caribbean by the specialized site Cruise Critic, based on the opinion of customers, including Americans. The city of Cienfuegos occupied the second place in this classification.

November 2, 2018: The multinational Virgin announces that the first trip of its cruise line would be destined for Havana in 2020. With capacity for 2,700 passengers and 1,150 crew members, the Scarlet Lady ―still under construction― should be the biggest to stop at the port of Havana.

November 2018: Cuba exceeds the 700,000 cruise passengers estimated by the island’s tourism authorities for the year. In 2017, the figure had hovered around 586,000, in both cases with travelers from the United States as protagonists.

January 24, 2019: John Wagoner, CEO of American Queen Steamboat Company, announces that Victory Cruise Line, the company they had acquired and that had plans to travel to Cuba in 2019, would no longer sail to the Island.

April 2019: The Seatrade Cruise Global takes place in Miami without official Cuban participation, despite the growth and popularity of the Cuba destination. Megan King, of the International Association of Cruise Lines, says that “Cuba is a destination in high demand for many of our lines.”

May 2, 2019: The heirs of two American families file lawsuits under Title III of the Helms-Burton Act against the Carnival company for the use of facilities in the ports of Havana and Santiago de Cuba, which were nationalized after the triumph of the Cuban Revolution.

June 4, 2019: The U.S. government announces the ban on cruise trips to Cuba starting the next day as part of a package of measures against the island. A government spokeswoman says that “cruises are used for sightseeing” in Cuba, something that Americans are forbidden by law.