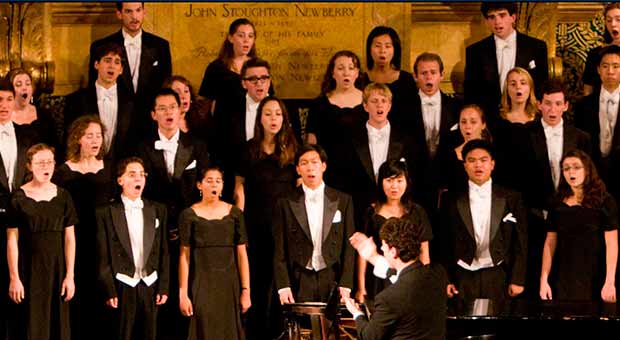 The Yale Glee Club (YGC), the main students mixed choir from Yale University, and one of the most important in the United States, will be in Cuba from next March 10 to 15, for a concert tour and cultural exchanges with local choirs. The young Musical Director, Dr. Jeffrey Douma, who is in charge of YGC, was already in Cuba in 2010 with the Yale Alumni Chorus.

They will offer two concerts; the first will take place in Matanzas , at St Peter Apostle Church, on March 12, at 6:00 pm, with the participation of Matanzas Chamber Choir, directed by Maestro José Antonio Méndez.

The second concert shall be at the Minor Basilica of St. Francis of Assisi Convent on March 13, at 6:00 pm and accompanied by Entrevoces choir, which is led by the Maestro Digna Guerra.

In addition, for this Cuban tour, YGC is planning “a set of Caribbean music, along with a song of Cuban composer Guido Lopez Gavilan.”

According to YGC biography, its members, either of “music or literature, environmental science or engineering, philosophy or mathematics, (…) are united by a love for singing and the common idea of ​​ raising the voice of oneself with that of others. “

On the spectrum of choral music, the Glee Club covers a range of interpretations that go “from the sixteenth century to the present, including Renaissance motets, contemporary choral works, world folk music and traditional Yale songs.”

Founded in 1863 by 13 men, now has eighty male and female voices, and it is the third U.S. oldest students mixed choir, only preceded by the Harvard Glee Club, founded in 1858, and the University of Michigan Men’s Glee Club (1859).