At the moment, there is no record of any complaint about this disappearance, nor is the location of these people known, although it is not ruled out that they may have crossed the border into Spain. 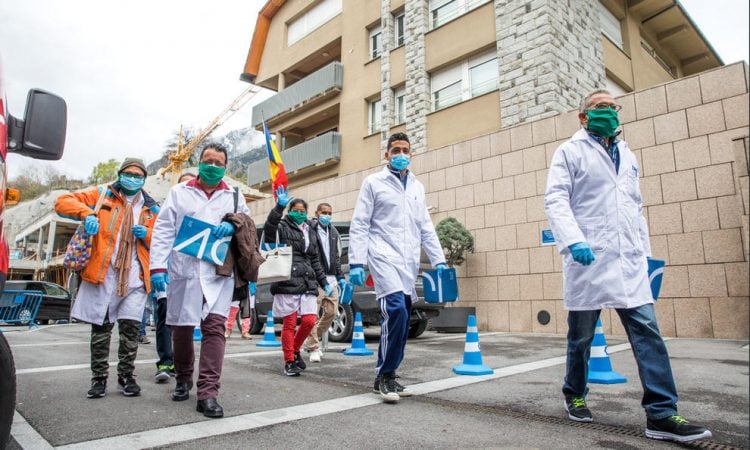 Members of the Cuban medical brigade in Andorra, after their arrival in that small European country to combat the coronavirus pandemic. Photo: Diario de Andorra.

Two members of the Cuban health delegation who arrived in Andorra to reinforce the health teams during the COVID-19 pandemic have been missing since Saturday and it is not ruled out that they have crossed the border into Spain.

They are a doctor and a nurse from the island’s brigade, belonging to the Henry Reeve Contingent―specialized in confronting epidemics and disaster situations―, who traveled in March to support the Andorran Healthcare Service and who, according to government sources cited by the Agència de Notícies Andorrana (ANA) news agency, “have not returned to the hotel” where they were staying in Escaldes-Engordany.

For now, according to the ANA, there is no record of any complaint being filed about this disappearance, nor is their location known, although it is not ruled out that they may have crossed the border of the Runer River in the direction of Spain.

According to the Diari de Andorra, who has advanced the possible flight of both health workers and a probable request for political asylum in Spain, one of the disappeared is the military doctor and anesthetist Dariel Romero, from Havana.

The publication affirms that the missing doctor is considered “one of the chiefs of the mission that went to the Principality,” and that the Cuban Consul General in Barcelona, ​​Alain González, in charge of supervising the work of the brigade, traveled to Andorra after the departure of the two health workers.

The daily itself reports that the Andorran head of government, Xavier Espot, said in an interview that what happened with the two Cuban health workers “is an anecdote” and that his Executive does not know if they have left the country or not, but that in any case “it should not involve any diplomatic conflict.” Espot assured that the disappeared professionals “will not be persecuted” because they had only gone there to work and they have not committed a crime.

For now, neither the authorities nor the island’s state media, which have systematically followed the work of the Cuban health workers in the European principality, have made a public reference to the case.

The Cuban health delegation, made up of 39 professionals, arrived in Andorra in March at the time of the highest incidence of coronavirus in this country and, of this contingent, there were still 23 who were supposed to return at the end of this month.