The phenomenon, considered the largest in recent decades, has already covered the entire island, although it is expected that in the next few hours the concentration of dust will decrease and humidity will increase, the Cuban Institute of Meteorology reported. 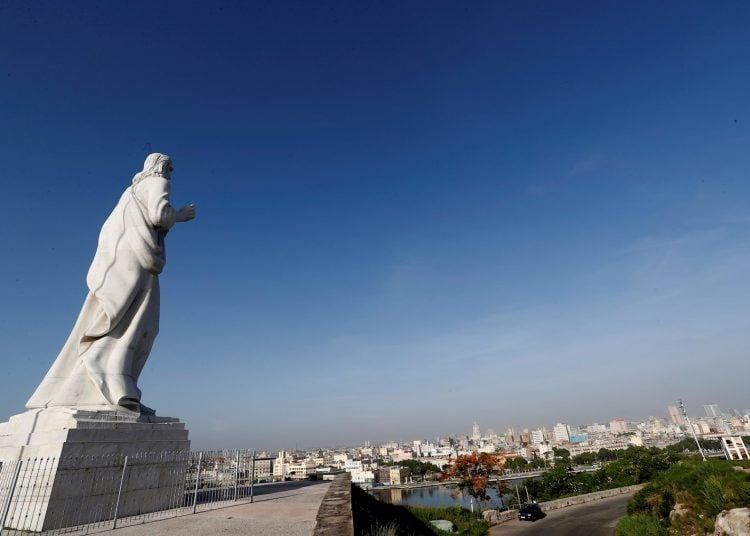 View of Havana covered by the dust cloud from the Sahara, on Thursday June 25, 2020. Photo: Yander Zamora/EFE.

The large Sahara dust cloud affecting the Caribbean started dissipating slowly this Thursday over Cuba, but its influence continues preventing rains and is raising the temperature on the island, which has registered possible all-time records for June.

The phenomenon, considered the largest in recent decades, has already covered the entire island, although it is expected that in the next few hours the concentration of dust will decrease and humidity will increase, the Cuban Institute of Meteorology (INSMET) reported.

The INSMET forecasted, in addition, that the little cloudiness in general and the high temperatures will be maintained.

The east and center of the country have been the most affected. Images published in the local press and on social networks show milky-hued skies instead of the usual blue, due to the high concentration of particles suspended in the atmosphere.

The province of Guantánamo, in the easternmost part of the country, is the one that has felt the most harmful effects of the cloud, with a record of 37.4 degrees Celsius, unusual for this time of the year.

The INSMET pointed out that 30.2 degrees were reached yesterday in Santiago de Cuba. In that eastern capital, dust limited visibility and “hid” the nearby Sierra Maestra mountains.

In Havana the sky also clouded over and the heat was felt (32.1 degrees Celsius, according to the Heat Index), although this Thursday the sky has already recovered its usual blue hue with some clouds, which had been impossible to see the day before.

The presence of the Sahara dust is usual on the island between June and August. Its influence hinders the formation of tropical cyclones but increases the sensation of heat and intensifies drought, one of the main climatic problems the island has had to deal with in recent years.

Minerals, mites, viruses, bacteria and other pathogens carried by the cloud increase the risk of disease, especially in asthmatic and allergic patients.

The Cuban health authorities have issued alerts on the proliferation of respiratory and skin diseases associated with this phenomenon and have recommended “now more than ever” the use of the facemask, mandatory to leave the house as part of the measures dictated by the government to prevent the spread of COVID-19.