“I grew up on that block, the son of a dialectical materialist, and I played ball and hide and seek with Joanqui and Andresito, Seventh-day Adventist Christians who also took me to go horseback riding at their grandparents’ farm in the country.” 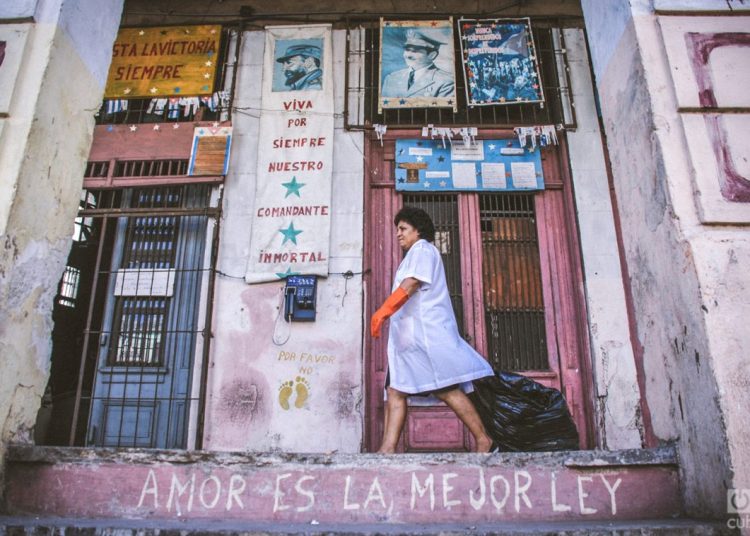 Contradiction is inherent to the human condition. To life itself. For me there’s nothing new in this, I just put into words a maxim with which we live and that, on many occasions, is more comfortable to avoid than to assume.

But the contradiction — with a bad reputation for many — exposes, in the midst of what we call dialectics, dialogue and discussion to get to the truth. It is the zero kilometer to move ideas and develop them.

Cuba, Cubans, we are not a planet out of orbit. As in the rest of the world, contradiction is natural and daily for us. Any of the people who took to the streets and were part of the protests that took place on July 11 in various parts of the island — where various demands from different social groups and ideological positions converged — live on the same block and could even share a roof with someone who, a week later, participated, spontaneously or not, in the acts of revolutionary reaffirmation called by the government.

What’s more, surely these people share the queue for chicken, the domino table in any corner, the sip of rum or the cup of mixed coffee in the morning. And, now in these times of medicine shortages, they even split the only aspirin they may have.

In the hard times of the special period, in my neighborhood, when blackouts occurred and which were called by Cubans with popular wisdom alumbrones (more time with power cuts than with electricity), I once heard a neighbor, in the middle of the darkness and suffocating heat of a summer night, remember of Fidel, and not precisely to cheer for him. Another day, the same energetic voice could be heard house to house haranguing to go out to adorn the block with chains made from clippings from the few remaining Soviet magazines and handwritten posters. It was September 28, the anniversary of the Committee for the Defense of the Revolution.

People of different faiths coexist on that same street, perhaps without realizing it because it was natural, at least from my childhood imagination.

That’s where my father Jesús Santos was born, who, as he had the name of the son of God and a reinforced surname for the liturgy, was an altar boy in his childhood and later became an atheist, a member of the Communist Party of Cuba and a Fidelista until the last of his days. And on that block, in front of what was our house, one day we scattered the ashes of my old man, as was his will.

A decade earlier, on that same piece of asphalt, my neighbor María, who as a child went with her family to live in the United States, returned to the neighborhood where she was born to celebrate her fifteenth birthday with a party with her neighbors. By the way, a few hours after Maria was born, in a hospital named Vladimir Ilyich Lenin, my father was the first to give her flowers. When she first returned to Cuba, the first gift she brought from Miami was for my dad.

I grew up on that block, the son of a dialectical materialist, and I played ball and hide and seek with Joanqui and Andresito, Seventh-day Adventist Christians who also took me to go horseback riding at their grandparents’ farm in the country; in that neighborhood I also watched movies, had lunch and freely visited the house of my other friends Renecito, Héctor and the aforementioned María, until they jumped to the other shore. In the middle of that street called Agramonte, we would play ball or listen to music of all kinds with the older kids, my brother Alex, Aquilinito, Liudmila, Gonzalito, Raulito, Eduardito, Margaritica, Evelyn, Angélica and others.

Today, only a couple of those neighbors live in the neighborhood. Others sadly are gone. The rest, like me, are scattered around the world. Some live in the southern hemisphere and others in the north. Some today sing Patria y Vida. Others, Me dicen Cuba. And there are those who dance to the rhythm of the two songs. Surely, if we were in Cuba, some of us would also have gone out on the streets on July 11 and others not.

That block, the contradictions, diversities and the previous list of endearing names, is part of my homeland, my Cuba. That street is a little bit of each of us who inhabit it without distinction of thought or creed.

Meanwhile, trying to put any category above that of Cubans or trying to cover up that there are contradictions in Cuba, as well as minimizing or turning a deaf ear to the fact that on July 11, 2021 there was a social outbreak in the country, denotes never having dipped our feet in the mud of the reality of the island.

In the same way we also get immersed in and invent contradictions that, sometimes, are not or should not be. It is not contradictory, for example, to reject the U.S. blockade and, with the same revolutionary effervescence, discuss Cuba and its government. Both demands are urgent.

Assuming the contradictions, questioning even what is established and understanding that every political and social process is not flawless or infallible, makes us better. “The Cuban Revolution demands countless revolutions. And every revolution is a victory against the limits of what is possible,” Cuban philosopher Fernando Martínez Heredia once told me.

Somehow, then, let us celebrate in this time of so much pettiness and pandemic, of so many extremisms that our contradictions are latent there. Assuming them saves us.