The top officials of the Supreme Court and the Attorney General’s Office explained in a press conference that shortened judicial procedures are currently being carried out against those accused of “minor crimes” and denied that there is an “avalanche of judicial cases.” 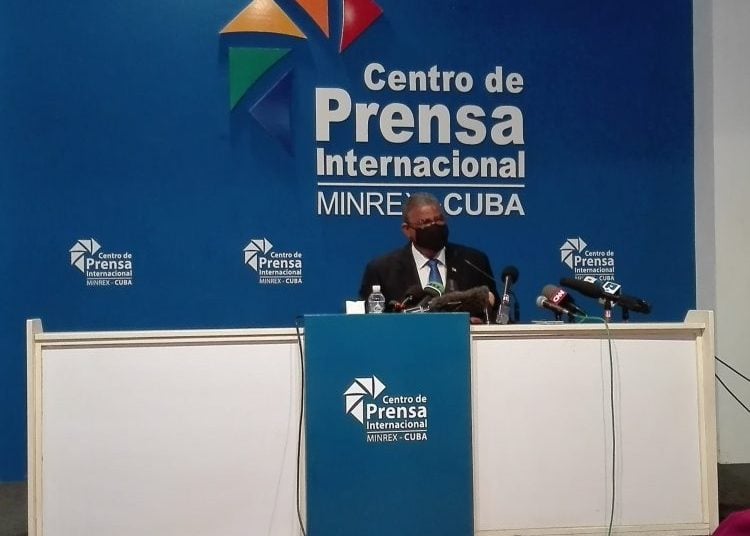 Rubén Remigio Ferro, president of the Supreme People’s Court (TSP) of Cuba, during a press conference on the judicial processes of participants in the protests of July 11 and 12, 2021 in Cuba. Photo: Attorney General’s Office of Cuba/Twitter.

The topmost authorities of Justice and the Cuban Attorney General’s Office denied this Saturday that summary trials are being carried out for those detained for the protests of last July 11 and 12, nor that there is an “avalanche of judicial cases” for these events, as has been stated on social networks and independent media.

“The matrix has been sown that these are summary proceedings, and they are not. In judicial jargon we call it ‘summary process,’ it is the equivalent of ‘abbreviated proceeding,’ they can be found in various laws around the world,” said Rubén Remigio Ferro, president of the Supreme People’s Court (TSP), in a press conference with the accredited national and foreign media.

Ferro also pointed out that there is a matrix “that speaks of an avalanche of judicial cases,” which, he said, is not true either. In this regard, he reported that as of this Friday, “only 19 judicial processes, involving 59 people, had reached the courts,” the official Cubadebate website specified.

According to the president of the TSP, the trials “are being held in accordance with the provisions of the law,” which include “the right to defense, to appoint lawyers, something that has also been said that the accused are not allowed.”

“For this type of proceedings, the law establishes that the subject decides whether or not to appoint a lawyer to defend him at the trial, or he defends himself. A number of those accused of these alleged crimes have decided to appoint lawyers and have had one, others have not,” said Ferro, who said that the detainees “have been given every opportunity.”

Relatives of detainees in the demonstrations such as the young filmmaker Anyelo Troya denounced this week that alleged summary trials are being carried out in which some defendants do not have a lawyer and the relatives do not receive information or do so after the trial has already been held.

In this regard, Yamila Peña Ojeda, Attorney General of the island, commented that the Cuban Attorney General’s Office and its lower instances have attended to more than 90 people with concerns and doubts, according to the usual procedures for the system of tending to the population.

For his part, Ferro pointed out that the defendants have the right to establish appeals for the courts in the second instance, where they will be able to present evidentiary materials, for which he explained that the ongoing judicial processes “still do not have a final judgment.”

The president of the TSP explained, in relation to the proceedings related to the protests, that so far “mainly misdemeanors” such as public disorder, minor injuries or contempt, which have provisions ranging from administrative sanctions or fines to sentences of one year in prison.

“They are processed through more expeditious and agile proceedings, but are not exempt of the right to the guarantee of a due process, including the right to defense,” reiterated the senior official, who insisted that Cuban justice “strictly complies with the main international instruments” on the matter and criticized that “there has been the purpose of discrediting the legitimacy, independence and impartiality with which the Cuban courts and judges act.”

“Cuban courts constitute a system of organs and function totally independently of any institution in the country. Cuban judges only owe obedience to the Constitution and the law,” he said.

“The fact that trials are shorter does not mean that procedural guarantees are not respected,” said Attorney General Yamila Peña.

At the same time, while the trials for misdemeanors get to court, the Attorney General’s Office keeps open the investigation of “a group of acts of extreme violence and gravity” in which “the responsibility of each person is determined.”

Two weeks after the massive anti-government protests that shook the island, the authorities have not released the official number of detainees and have denied that there are people missing in the country for participating in these events. The only reference to those arrested are the lists that independent activist groups and organizations have compiled and disseminated on social networks, according to which there are more than 500 detainees.

The Cubalex lawyers’ NGO, for example, has released a preliminary list of detainees that until July 21 included 584 names, of which it was confirmed that 150 were arrested and 91 were released, the Spanish agency EFE reported.

In this regard, Peña Ojeda pointed out that “through the networks, although people have not addressed the Attorney General’s Office directly, based on the monitoring  that the body carries out, we have captured information and there are people who have been summoned.”

“There are people who have filed complaints, they are being investigated through the procedure we have in our body, they will be referred and of course, we will give them an answer,” she said.

In the press conference this Saturday, the Cuban legal authorities confirmed that there are minors under judicial investigation, who receive “differential treatment” due to their condition.

Peña explained that the detained minors “have been few and some were even taken to the police in the company of their parents,” according to reports by the official press. The Attorney General explained that their participation in the events is being investigated and that no one under 16 years of age will be tried, but that in their case other educational measures are applied, in accordance with the provisions of Cuban law.

In this regard, the president of the TSP recalled that the criminal age in Cuba is 16 years, but that when young people from 16 to 18 are tried and convicted by criminal means “there are special procedures, differential treatment according to the Penal Code” and established in the Convention on the Rights of the Child.

Regarding the voices that request from inside and outside Cuba an amnesty for those detained in the protests, Ferro considered that it is a political decision that corresponds to the government and “has its moment.”

“The processes are in progress and there is the option of the resource. In the country it is not a crime to think differently, it is not a crime, it is a right. We are not troglodytes,” stressed the president of the TSP, while the Attorney General added that “it is not what corresponds” yet since the investigations are still ongoing.

Peña Ojeda pointed out that a part of those arrested are under precautionary measure of provisional imprisonment and others with non-detention measures, at the same time that several individuals have also been released without charges, “because their situation was clarified by the criminal investigation bodies,” Cubadebate said.

In addition, she said that “within the law” in the most serious cases they will act “severely,” “where it is shown that people organized, promoted or financed the events that affected collective security, legal security and citizen tranquility. We have that responsibility.”

“There have been events against people, against authorities, against property, not only state, but also personal. Events of extreme gravity. These are the ones that we are investigating today, determining from the participation of the people who have been arrested, and others who have not been but who are being called to the processes, with the pertinent evidence,” added the Attorney General.

The arrests and legal proceedings against participants in the protests are closely followed inside and outside the island, and, like the authorities’ response to the events, have been the object of harsh criticism by opponents, activists, international organizations and governments such as of the United States, which Havana accuses of supporting the anti-government demonstrations, the largest in 60 years on the island.

The Cuban authorities have denied that what happened was a “social outbreak” and have described the events as “disturbances,” supported by a “political-communication operation” organized from the United States, while statements have been made outside the country. and demonstrations for and against the protests and the Cuban government.