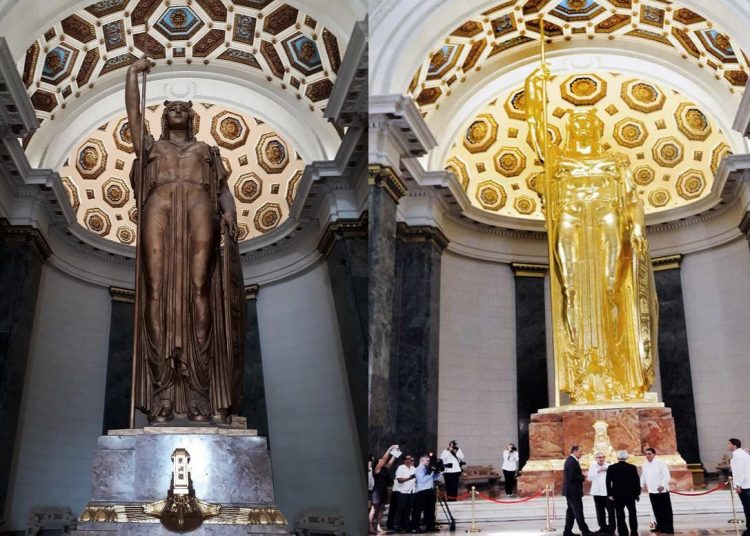 The before and after of the statue of the Republic, newly restored in Cuba’s Capitol building. Photos: Facebook Katherine Hechavarría.

The iconic Statue of the Republic, the third largest indoor piece in the world, can again be seen repaired and gold plated in the lobby of Havana’s Capitol building.

The reopening was attended by former Cuban President Raul Castro and Russian Foreign Minister Sergey Lavrov, who is officially visiting the island to coordinate economic and cultural cooperation between the two countries.

More than 20 Russian experts restored and applied a thin layer of 24 karat gold to the monument, with funding and techniques from Russia.

The over 18-meter-high statue is located in the lobby of Havana’s Capitol, a building under restoration for almost a decade, although the work is expected to be completed before the celebration of Havana’s 500th anniversary in November.

The cooperation project worth millions also includes the repair and gold plating of the dome of the building, built between 1926 and 1929 similar to Washington’s Capitol, considered the third in importance in the world for its volume and the seat today of the island’s National Assembly.

“Cuba is a faithful friend and strategic partner of Russia. Our relations have gone through the test of time and continue to develop today.… This joint project is an example of that cooperation and testimony of the friendship that unites us,” said Lavrov during the ceremony.

Sculpted by Italian Angelo Zanelli, who is also the author of the friezes and the two large statues that crown the steps of the building, the Cuban Republic is inspired by the Greek goddess Athena and modeled in the image of two Cubans: a white woman from the high bourgeoisie for the face and a mulatto woman for the body.

It represents the tutelary virtue of the Cuban people and presides over the 120 meters of the “Hall of Lost Steps,” the most beautiful of the island’s Capitol building.

At the foot of the sculpture is the replica (the original is in a vault of the Central Bank of Cuba after two famous robberies) of a diamond that belonged to Nicholas II, the last Russian tsar, and marks kilometer zero of the Cuban Central Highway.

In the center of the hall rises the huge and iconic dome of Havana’s Capitol building, in which Russian specialists are working and which should be completed next September, according to Havana Historian Eusebio Leal.

Leal also thanked Russian President Vladimir Putin for the “donation that made the work possible.”

At the end of the ceremony, which was also attended by Cuban Foreign Minister Bruno Rodríguez and National Assembly President Esteban Lazo, Lavrov and Castro approached to talk with the Russian specialists, to whom the former Cuban president explained the composition of Parliament and thanked them for the effort in the restoration of the monument.

Although it is not included in the official agenda of the two-day visit to Havana, it is likely that Lavrov will meet with current Cuban President Miguel Díaz-Canel, who visited Moscow and signed with Putin several economic and cultural cooperation agreements.

(With information from EFE).

Russia closes ranks with Cuba and Venezuela against U.S. “impositions”