In addition, three patients are reported in critical condition and five in serious condition, while a second local transmission event was detected in the municipality of Consolación del Sur, in the province of Pinar del Río. 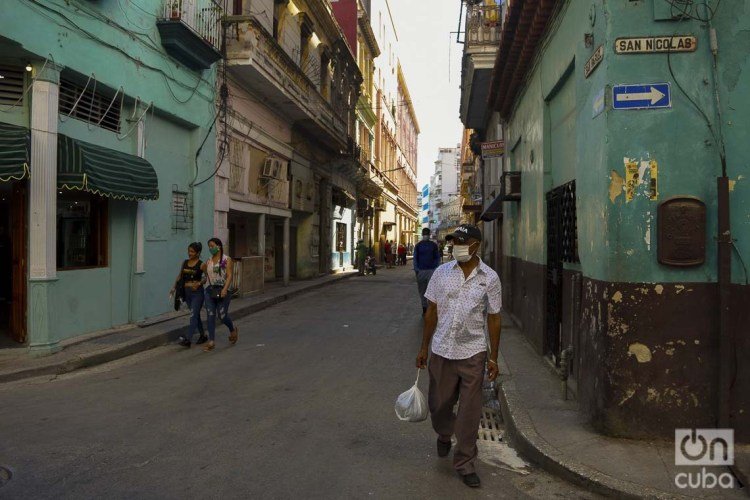 People using facemasks in Havana as a protection measure against the coronavirus pandemic. Photo: Otmaro Rodríguez.

The Cuban Ministry of Public Health (MINSAP) reported 31 new cases of COVID-19 on the island at the close of this Sunday, bringing the total number of confirmed patients to 170.

The health authorities reported that 342 people were studied yesterday, of which 29 Cubans and two foreigners were diagnosed: a 4-year-old American boy, who was visiting his grandparents in the city of Bayamo, Granma province, and a Chinese citizen who works in the Mariel Special Development Zone, who is a direct contact with a previously confirmed case.

The daily report also records that 161 patients are currently hospitalized, of which 153 show a stable clinical evolution, while three are in critical condition and five are in serious condition.

In addition, a fourth deceased is reported, a 63-year-old Cuban resident in the municipality of Venezuela, Ciego de Ávila province, with a history of diabetes mellitus and high blood pressure, who had denied the presence of symptoms and when he went to the doctor he already had acute respiratory symptoms, with alarming signs, the note from MINSAP said.

Of the remaining cases, four had already been discharged and one American was evacuated to his country.

According to the report, until the close of Sunday a total of 2,681 people were admitted for clinical-epidemiological surveillance in isolation centers, 91 of them foreigners and 2,590 Cubans. Meanwhile, another 29,885 are monitored in their homes through primary health care.

Similarly, the health authorities confirmed this Monday at the press conference a second local transmission event of COVID-19, after the one already registered in the province of Matanzas. This new event is located in the municipality of Consolación del Sur, in the province of Pinar del Río, and has as its source a couple who arrived from Cancun, Mexico, from which several people have been infected, while another group remains under surveillance as suspects.

As for the 29 Cubans diagnosed this Sunday, seven have a source of infection abroad: the United States (2), Mexico (2), Spain, Panama and France (one each), while the remaining 22 were infected on the island, “as they are contacts of foreigners, Cubans coming from abroad or secondary cases related to foreigners,” MINSAP affirmed.

This Monday, Dr. Francisco Durán, director of Epidemiology of MINSAP, assured the press that “the measures contemplated in the plan continue to be reinforced” as implemented by the government to face the coronavirus pandemic, and reiterated the call to the population to “stay at home and if it’s necessary to go out that it be minimal and as protected as possible.”

Regarding a possible peak of infections on the island, Durán explained that MINSAP created a group of specialists who, in addition to health experts, included geographers, computer scientists, and mathematicians, who “have been working for days on many elements that have to do with research,” including “the prognosis of the disease, how it should behave in the coming days.”

The objective, he said, is to have the conditions created in the country, both technical means and trained medical personnel, by the time the peak arrives; although he recognized that the specialists do not yet have conclusive results on a possible period in which this may occur, “because it depends a lot on the containment measures adopted by each country.”

“That modifies the peak, but this must occur and they are doing analyses and as soon as we know it we will provide the information,” he said.

The COVID-19 pandemic is already affecting most countries in the world and has so far infected more than 750,000 people and killed more than 26,000, while more than 158,000 have already recovered.