“After finishing its second flight, the aircraft, piloted by the captain on board Rubén Martínez Machado, did not return to the runway,” confirms the note released by the Cuban Civil Aeronautics, which explains that the pilot, a native of Santa Clara, had License 3060, valid until October 30, 2022. 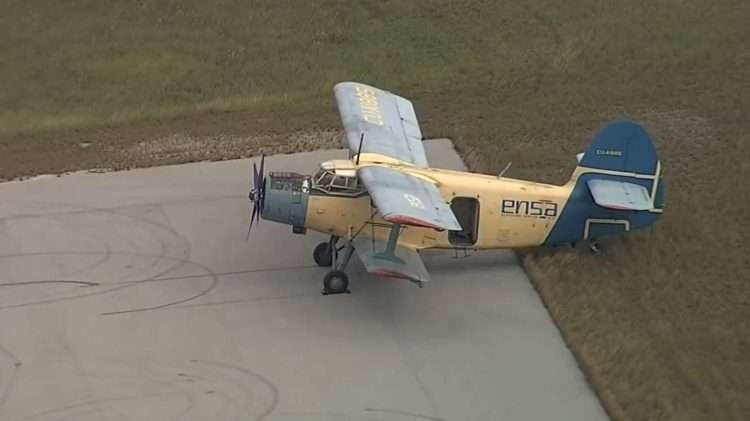 The Cuban civil aviation authorities continue to investigate the details of the incident based on the available information. Photo: video capture from TeleMundo report.

A note released by the Civil Aeronautics of Cuba describes the event that occurred last Friday, when a Cuban pilot landed a fumigation plane in Florida, as “violation of airspace, of operational safety and of Cuban aeronautical regulations.”

“Air piracy acts constitute crimes defined in various international conventions, ratified by Cuba and the United States. This event represents a violation of Cuban airspace, of operational safety and of aeronautical regulations, in correspondence with the Annexes of the Convention on International Civil Aviation (Chicago Convention),” the official newspaper Granma stated.

The Civil Aeronautics of Cuba confirmed that the AN-2 type aircraft, identified with flight CNI 400, registration CU A1885, belonged to the National Air Services Company (ENSA) and took off from the ENSA Base Economic Unit in Sancti Spíritus, at 07:00 on Friday, bound for the El Cedro runway to carry out agricultural fumigation work.

“After finishing its second flight, the aircraft, piloted by the captain on board Rubén Martínez Machado, did not return to the runway,” confirms the note, explaining that Martínez Machado, a native of Santa Clara, had the License 3060, valid until October 30, 2022.

Independent media published the news this Friday and detailed that Martínez Machado landed about four hours later at the Dade-Collier Training and Transition airport, in the middle of the Everglades.

The island is going through a strong migratory wave that has multiplied not only the number of rafters who venture to cross the Straits of Florida, but also the number of migrants who make the journey overland through Central America to the border between Mexico and the United States.

Last month other Cubans stole a boat from the port of Mariel to reach the United States but were guarded by the Coast Guard of that country. According to an EFE report, Cuba did not officially confirm this information, which was disclosed on social networks.

The number of Cuban migrants who entered U.S. territory in fiscal year 2022 exceeded 224,000, according to reports from the Department of Customs and Border Protection (CBP), cited by EFE; higher than that of previous waves and mainly motivated, in the opinion of analysts, by the severe economic crisis that the island is currently suffering.

With information from EFE and Granma

Eye to the viewer: Liudmila Velasco