The package of measures includes modifications to the customs tariffs in force for sending and receiving parcels by air, sea or postal services. 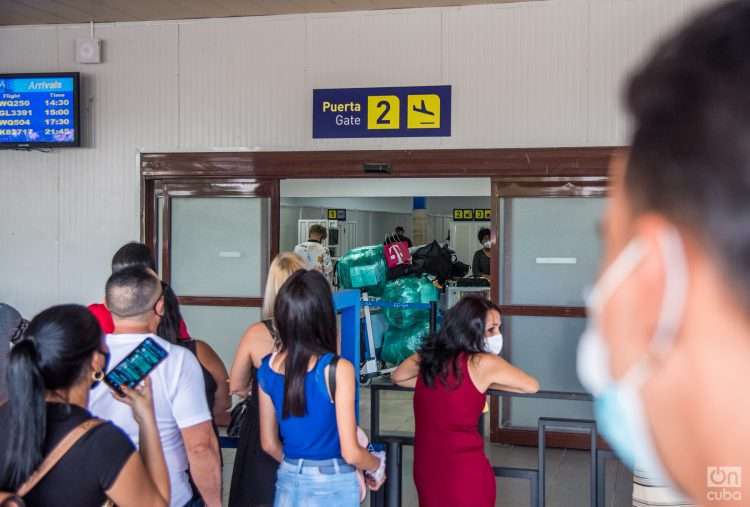 Cubans waiting for paperwork prior to traveling. Photo: Kaloian.

The new regulations that make individuals’ non-commercial imports more flexible, as well as the modifications to customs tariffs for air, sea and postal shipments recently announced by the Cuban government came into force this Monday.

In accordance with Resolution 204 of the Ministry of Finance and Prices (MFP), recently published in the Gaceta Oficial No. 45 of the Republic, the amount that can be sent to Cuba by sea, by post or by courier increases, while the tariff rate decreases.

In this sense, individuals are allowed to import ― through shipments ― up to 200 dollars, which is equivalent to 20 kilograms (kg), since according to the regulations of the General Customs of the Republic (AGR) a kilogram would be the equivalent of 10 dollars, refers a dispatch from the Agencia Cubana de Noticias (ACN) news agency.

The novelty is that if until now the limit was 10 kg, with the same cost (200 dollars), from now on this amount is maintained, but doubling the weight is allowed, the news agency specified. Another measure is that the weight of the package for which the person who receives it in Cuba will not have to pay tariffs, increases to 3 kg (until now it was 1.5 kg).

Resolution 204 of the MFP also provides for the reduction of the customs duty to be paid in Cuban pesos for the shipment of the package, since it will not be the entire value, but 30% of the remaining 17 kg of the 20 allowed now in total, the ACN highlighted.

In a recent broadcast of the Mesa Redonda television program on these regulations, Minister of Finance and Prices Meisi Bolaños gave the example that the tax to be paid for a shipment of 20 kg would now be reduced to 1,224 CUP, that is, the weight of the package is doubled and what is paid for tariffs is reduced by 70%, the news agency pointed out.

With the new regulation, whoever receives a package of 10 kg is applied 30% to 7 kg, which is equivalent to 30% of 70 USD x 24 CUP. Instead, under current conditions it would be 100% of 70 USD x 24 CUP, the official said at the time, who, quoted by the ACN, stressed that there is a change and a significant reduction in order to reduce the cost for the population and the Cuban family to receive shipments and parcels from abroad.

Likewise, the Gaceta Oficial No. 45 of the Republic includes two resolutions (175 and 176) issued by the General Customs of the Republic. These consist of the rules for non-commercial imports by individuals as well as the list of reference values ​​for some products, which serve as a guide or recommendation for calculating the tax to be charged by Customs from now on.

These measures seek to alleviate as far as possible the shortage of products that the Cuban population is currently experiencing, victim of a long-standing economic crisis, now aggravated by the impact of the pandemic, the intensification of the U.S. embargo, and the little impact achieved so far by other measures adopted by the government to overcome the complex situation.