At the Supertanker Base the panorama is bleak; the magnitude of the catastrophe can be perceived from any of its entrances. 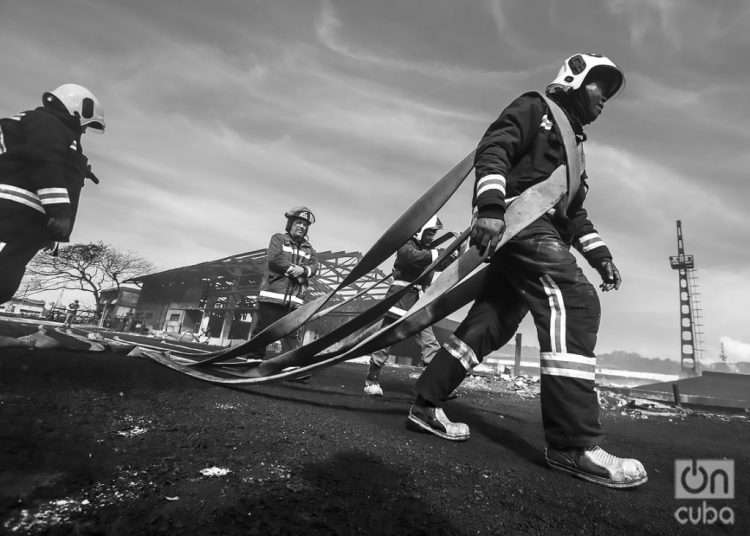 While small flames were still flickering in a huge esplanade covered in oil, soot, ashes and smoke, authorities from the Cuban Fire Department officially declared the most devastating fire in the nation’s history extinguished. At nine minutes past seven on the morning of this Friday, August 12, after almost 160 hours burning, the fire finally gave way at the Matanzas Supertanker Base, transformed into a gloomy and dark field.

The tragedy began to weave its plot last Friday, August 5, when at the end of the afternoon lightning struck the center of the battery of eight fuel tanks located in the Industrial Zone of the city of Matanzas. The electrical discharge fell on tank 52 — full to half capacity with 26,000 cubic meters of national crude oil —, the epicenter of a large fire that spread over tanks 51, 50 and 49, all collapsed and destroyed.

After a week of uncertainty, there are no longer any traces of the enormous column of smoke that rose from the Bay of Matanzas and advanced almost 200 kilometers to the west along the entire northwestern coast, but the fire has left many visible traces…

At the Supertanker Base the panorama is bleak; the magnitude of the catastrophe can be perceived from any of its entrances. From the outset, any person can be misplaced when entering the terminal, because where previously there stood out, imposing, four domes of the fuel tanks with the largest storage capacity (around 50,000 cubic meters) in the country, now only a barren and charred hill can be seen.

On the ground, the remains of charred metal structures break when tread on by the tired footsteps of Cuban firefighters and Mexican and Venezuelan technicians who collect dozens of hoses scattered throughout the Base. These materials are mixed with the water from the pumps that runs from the middle of the hill to continue cooling the area of ​​the fire, and with a huge amount of oil transformed into a kind of solidified lava, as if a volcano had spewed fire nonstop.

The traces of the disaster reach the entrance of the Base, down the hill, where heavy machinery carried out earthworks to prevent the burning crude oil from reaching a generator set and other smaller deposits of light fuels that, if they exploded, would have complicated much more the control and containment of the fire.

Making progress in the middle of that scenario is a complex task. There are many large-diameter pipes that, still hot, have been disabled and block various accesses, while twisted irons that gave way to the fury of the fire also appear as obstacles.

Some warehouses and buildings that have lost their façade and are at risk of collapsing are still standing, delimited by red tapes with a word in capital letters: “DANGER”. These constructions, in turn, are surrounded by trees and palms that, although they were totally incinerated, remain standing as a symbol of a last resistance against the devastating power of fire.

Precisely, the line formed by the skeletons of the warehouses, the trees and the palms are the prelude to the most devastating scenario: an immense smoking esplanade, where some flames still refuse to go out. According to some Sancti Spiritus firefighters who were sitting on the edge of the road in front of that gloomy picture, the oil that spilled from the tanks ran through that area and destroyed the vegetation and buildings, leaving behind only the pipes, valves and the connections of the Base system itself, as well as a completely blackened water tank.

Also standing are specific sectors of the retaining walls, where each of the four damaged tanks were located, whose bases survived the multiple explosions that since last Friday, August 5, kept millions of Cubans with a lump in their throats. Around two of them, there is still movement.

In tank 49, renamed tank 4 as it was the last to light up, is where the heat is perceived the most, so the firefighters have not yet fully withdrawn. On the other hand, in tank 51 or tank two, the most tragic traces of the fire can be seen, since dozens of forensic and legal medicine specialists are digging there in search of the remains of the missing.

From the top of the hill, once a mound of small bushes and now a cemetery of burnt plants and dozens of empty water bottles, the magnitude of the incident can be appreciated much better. The silhouette of the four deformed tanks, the charred buildings and pipes and the smoke that still rises from the burning ground are the graphic proof of an unprecedented tragedy. It remains now to investigate and discover the hidden traces of this fire…