In addition, active cases totaled 5,100, another negative mark for the island that is not higher today thanks to the 697 discharges recorded yesterday. 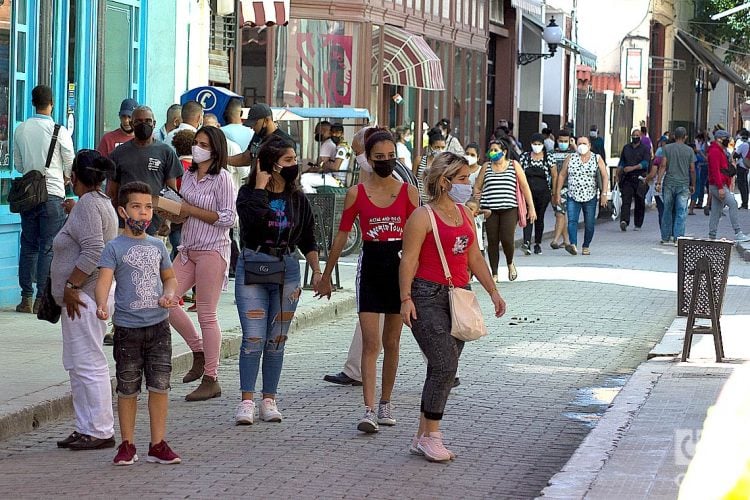 People on the street, during the outbreak of COVID-19 in Havana, in January 2021. Photo: Otmaro Rodríguez.

The Cuban Ministry of Public Health (MINSAP) reported three deaths from COVID-19 and 910 new cases at the end of this Friday, a new record of daily infections on the island.

In this way, the number of patients detected in the country since the start of the pandemic was more than 25,000 (25,674), while the death toll already stands at 213. In addition, active cases rose to 5,100, another negative mark that is not higher today thanks to yesterday’s 697 discharges.

At this time, 11,684 people are hospitalized in Cuba for reasons related to the SARS-CoV-2 coronavirus. Of these, 4,080 are suspects and 20,504 are under surveillance, while of the 5,100 confirmed, 5,055 have a stable clinical evolution and 45 are in ICUs: 21 in critical condition and 24 in serious condition.

Regarding the 910 new infections, 814 were contacts of confirmed cases, 63 have their source of infection abroad and in 33 the source of infection had not been specified. In addition, 440 are female and 470 male, while 375 were asymptomatic at the time of their diagnosis, according to the most recent report of the MINSAP.

Regarding this, in his usual morning press conference, Dr. Francisco Durán, national director of Epidemiology of the MINSAP, was alarmed by the high number of pediatric patients in recent weeks, already detected this January and which represent more than half of the confirmed cases in this age group since the start of the pandemic.

As if that were not enough, among the patients with COVID-19 under 18 years of age, more than 40% are infants of three months or less, the specialist said.

Finally, by province, Havana registered a peak of 415 infected, its highest number not only in the current outbreak but since it reported its first cases last year. Guantánamo (130), Santiago de Cuba (90), Pinar del Río (44), Villa Clara (41) and Matanzas (40) also showed numbers in red.

With this, the infection rate per 100,000 inhabitants in the last 15 days grew in Cuba to 72.72, a number that, moreover, does not take into account infected cases. In particular, the Cuban capital and the eastern Guantánamo and Santiago maintain a rate of more than 100.