But although it did not cause any deaths, Tropical Storm Laura did affect electrical networks, state entities, homes and crops. 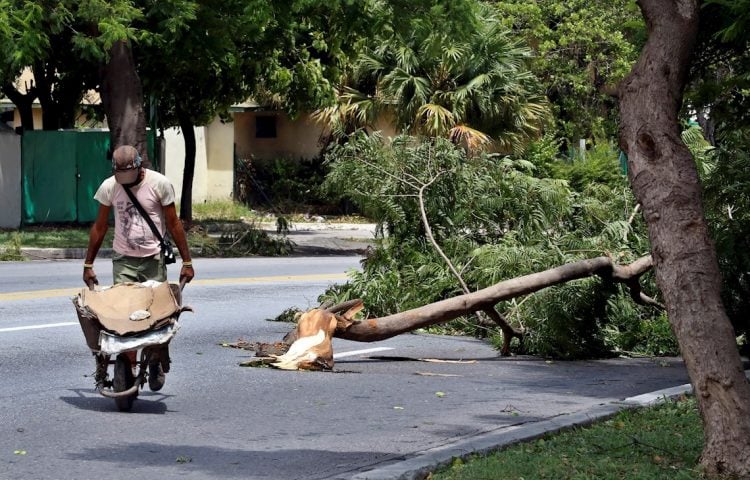 A man walks by a fallen tree after Tropical Storm Laura in Havana, on Tuesday, August 25, 2020. Photo: Ernesto Mastrascusa/EFE.

This Tuesday Cuba started throughout its territory the phase of recovery and evaluation of the damages caused by Tropical Storm Laura, which between Sunday and Monday crossed the island from one tip to the other without leaving victims but did damage electrical networks, state entities, homes and crops.

Initial predictions estimated that the cyclone would cross the entire country in half and pass over Havana in a route that would have caused havoc, but finally the trajectory changed and the center of the storm moved to the waters of the south coast until its exit through the westernmost tip of Cuba.

With the entire island in the “recovery phase,” the fourth and last of the stages established by the Cuban Civil Defense in the face of a meteorological event, President Miguel Díaz-Canel asked that work on the restoration be carried out “as quickly as possible” to prevent the damages from being added to pending repairs from previous storms and hurricanes.

The most widespread damage was that suffered by the electrical system. Hundreds of thousands of Cuban homes were without electricity this Tuesday, with a special incidence in the province of Pinar del Río, where 95% of homes had problems with energy supply, according to a report on state television.

In several municipalities of Havana, where more than two million people live, blackouts and interruptions in the water supply service also continue despite the fact that the storm did not hit the city with force beyond some gusts of strong winds and isolated rain.

Telecommunications systems did not suffer widespread damage, although some cuts were caused by downed poles, trees and wiring, or by lack of electricity supply in stations.

Brigades of operators were already working in all the provinces to repair infrastructure and restore basic services throughout this week, according to statements from the Electricity Conglomerate and the ETECSA state telecommunications enterprise.

The authorities’ preliminary assessment estimates that more than a thousand homes have suffered partial or total collapses and loss of roofs, with greater damage in the eastern provinces of Guantánamo and Santiago, where Laura momentarily touched land on Sunday night.

More than 300,000 people (almost 30,000 in Havana) were evacuated from vulnerable areas between Sunday and Monday, some to state shelters but most to the homes of relatives, friends and neighbors.

The school year, the rain

Another priority in the recovery stage is the fitting out of schools―several were damaged by downed trees―within a week of the resumption of the course in all of Cuba except for Havana, where the outbreaks of COVID- 19 made it necessary to reestablish tough measures to contain the spread of the disease.

Agriculture was another of the sectors hit by the storm, which wreaked havoc on banana, cassava, sweet potato and corn plantations, as well as tobacco houses in Pinar del Río, the island’s main tobacco growing area.

The tourism sector’s facilities, badly hit other times by the passage of storms and hurricanes, did not suffer major damage on this occasion.

The Civil Defense General Staff issued a call, in its first coordination meeting of the recovery phase, to inspect the state of homes, networks and wiring, as well as to take extreme hygiene measures and precautions to prevent the formation of mosquito focuses after the rain, which are the transmission vectors of diseases such as dengue, endemic on the island.

It also asked the population to avoid going through flooded areas, touching downed power lines and to stay away from places with danger of collapse or landslides, among other measures.

The positive aspect of the storm’s passage was the rainfall, which partially restored the water reserves of the Cuban reservoirs after a prolonged period of drought.

“Fortunately less than we expected has happened and (the storm) has brought a little water to some parts of the country that had a complex situation,” acknowledged the Cuban president during a meeting of the Economic-Social Organ of the National Defense Council.

For the current hurricane season―which will conclude on November 30―the specialists of the Forecasting Center of the Cuban Institute of Meteorology place the probability of the island being hit by a hurricane at 60%, after the 2019 season left the island unharmed.

The last time a large hurricane affected Cuba was in 2017, when Irma crossed the Cuban north coast from east to west, leaving 10 dead and material losses quantified at 13.185 million dollars in housing, infrastructure and in the agricultural and livestock sectors, according to official data.