The Coordinating Center for the Clinical Trial of the vaccine known as Soberana 01 noted that the first 20 vaccinated subjects are “in perfect health” and that “the only adverse effect recorded was mild pain on the spot where the injection was given, which it is a side effect, common to all vaccines.” 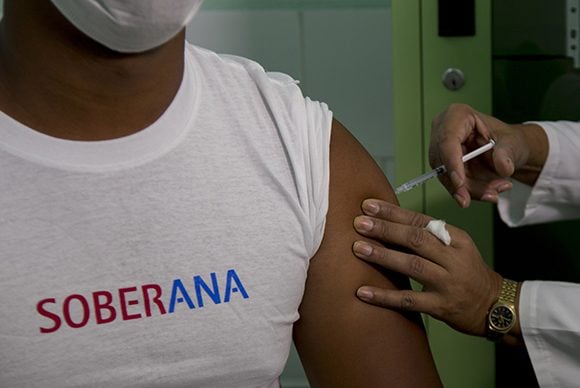 The Cuban vaccine candidate against the SARS-CoV-2 coronavirus, which began this Monday its clinical trials in humans, shows no serious adverse effects after two days of vaccination of the first 20 volunteers.

The Coordinating Center for the Clinical Trial of the vaccine known as Soberana 01 reported this Wednesday that “48 hours after being vaccinated, the first 20 subjects―whose ages range between 19 and 59 years―are in perfect health.”

In an informative note cited by the Agencia Cubana de Noticias (ACN) news agency, the coordinators of the test indicated that “the only adverse effect recorded was mild pain on the spot where the injection was given, which is a side effect, common to all vaccines.”

They added that “the first safety report will be delivered on Monday, August 31 to the authorities of the Center for State Control of Medicines, Equipment and Medical Devices (CECMED)” and that “later, the trial will begin with the rest of the expected subjects, belonging to the age group between 60-80 years.”

The trials of the vaccine, developed by scientists from the Finlay Institute, were authorized after its registration on August 13 in the CECMED registry, and are being carried out at the National Toxicology Center (CENATOX), an entity “responsible for ensuring the good clinical practices” in the test, for which they have all the necessary conditions, according to this center’s officials.

So far, “the schedule provided for in this clinical trial is being met, where safety, reactogenicity and immunogenicity are evaluated in healthy adults between 19 and 80 years of age,” the organizers said.

The second phase will begin on September 11 with the vaccination of the remaining volunteers until the planned 676 are reached. Participants in the trials will receive two doses of the vaccine 28 days apart and their response will be studied throughout two months.

The Finlay Institute has set the date of completion of the study for January 11, 2021, the results of which would be available on February 1 to be published on the 15th of the same month.

The Cuban vaccine already successfully passed the animal experimentation stage between May and August and is the first vaccine candidate from a Latin American country approved for clinical trials. And although the human trials began this week, on July 28 the three main researchers of the team that has developed the vaccine candidate inoculated themselves with the formula, and they have not reported negative effects.