Minister of Economy Alejandro Gil affirmed that authorizing these imports on a commercial basis “would be a mistake” and “a contradiction with respect to the strategy we are implementing” because, he said, this would lead to the flight of foreign currency from the country, something that the authorities are trying to avoid and the main reason for the opening since the end of 2019 of a group of stores for the exclusive sale in freely convertible currency. 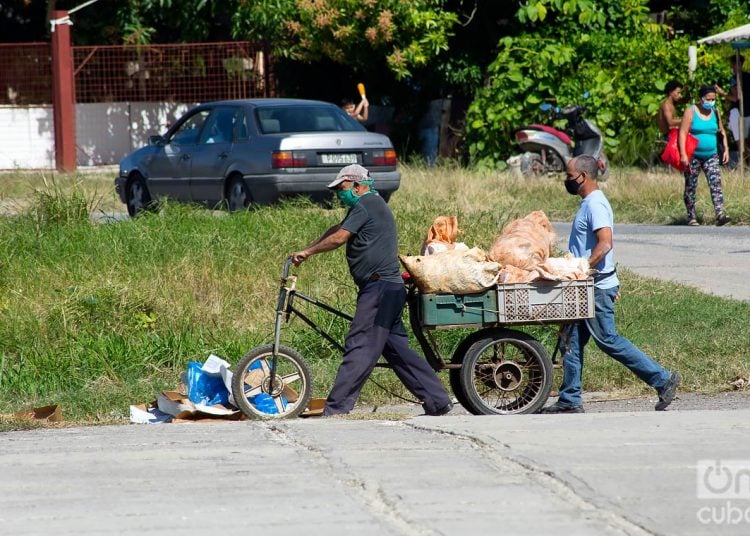 People transporting goods during the outbreak of COVID-19 in Havana, in January 2021. Photo: Otmaro Rodríguez.

The Cuban government reaffirmed its refusal to allow commercial imports by individuals as part of the reform package it is carrying out, in a context marked by the shortage of a group of products and the economic crisis increased by the coronavirus pandemic.

Importation by individuals “could seem, at first glance, a short-term solution, but it would be a measure that would affect the economy, slow down the recovery process and reduce the chances that the economy has of imposing itself in this scenario and give a better quality of life to our population,” said Cuban Minister of Economy Alejandro Gil on this Friday’s Mesa Redonda television program.

Gil acknowledged that his government has received opinions and concerns from the population on this issue, according to which “if we have a moment of scarcity in the economy, if the country does not have the possibility of maintaining a stable supply in the markets, why not allow people to go abroad to buy products and sell them here?”

He responded to this by saying that authorizing these imports “would be a mistake” and “a contradiction with respect to the strategy we are implementing” because, he said, this would lead to the flight of foreign currency from the country, something that the authorities are trying to avoid and the main reason for the opening since the end of 2019 of a group of stores for the exclusive sale in freely convertible currency.

The minister recalled, quoted by Cubadebate, that one of the arguments for the opening of these stores “was precisely that the hard currency was leaving the country” at a time when the government had no “possibility of supplying the markets and providing resources to the population.”

More than a year after the opening of the first establishments in freely convertible currency, Gil affirmed that “the marked strategy of collecting foreign currency as a way to produce products in national currency for the population is working.”

“That we don’t have the level of supply that we should to satisfy the country’s solvent demand, it is real. But it must be understood that we have been operating for almost a year in pandemic conditions, since March 2020. Tourism is totally affected, the blockade comes from way back, the suspension of cruises…,” he explained.

He also affirmed that although “there is a minimum level of supply,” Cuba is “surviving this situation and we have a strategy to reverse that situation.” However, he said that “it does not depend only on us, but on the international context, but everything we do is for that.”

In addition, he acknowledged that “not all conditions have been created, from the point of view of supplies and inputs,” for self-employment, a constant claim from the private sector on the island, and pointed out that his government has to “work on that.” But, he said “our economy does not give up having a stable supply in wholesale markets, that is a goal to be achieved.”

In Gil’s opinion, the opening of stores in freely convertible currency “would not be a measure that benefits the population if we renounce the capture of these currencies in the state network to finance our industry, and then we promote that those currencies when they enter, come out again and do not connect with our domestic market,” and pointed out that his government “defends the need to maintain a level of supply in the national market in freely convertible currency and also in Cuban pesos,” “because foreign exchange is also captured there, but we still haven’t been able to have a level of supply in the market as a consequence of this crisis.”

“If we promote the import by individuals of products from abroad to resell them in the country, the national industry will be totally disconnected from it; we would not be creating jobs, one of the challenges we have,” and “neither would we be developing the national industry and that, ultimately, affects the people, the self-employed workers themselves, who will not have inputs to carry out other activities,” he added.

As part of its reforms, the Cuban government gave the green light to private sector exports and imports, and allows individuals to import, but always through state-owned companies and without commercial intent. In addition, the island’s authorities have insisted on the role of self-employment in the current economic scenario of the country and recently expanded the activities that can be carried out in this modality and published a list of those that are not allowed.

“The improvement and expansion of self-employment, in addition to the generation of new jobs, will provide the economy with greater vitality, diversification and competitiveness. That is the road to follow. We all win,” Gil wrote days ago on his Twitter account.