Resolution 105 “National Action Model for responding to cybersecurity incidents,” published in the Gaceta Oficial No. 92, comes one month after last July’s anti-government protests — articulated and disseminated largely through social networks —, which has generated criticism and suspicion about it. 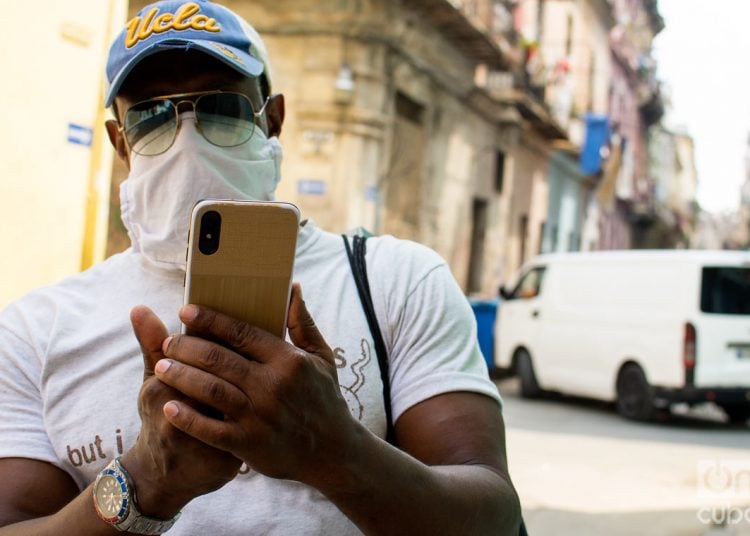 A man checks the internet on his cell phone in Havana, during the COVID-19 pandemic. Photo: Otmaro Rodríguez/OnCuba Archive.

The Cuban government released this Tuesday a new and controversial cybersecurity regulation, which typifies possible “incidents” in this area and defines their level of danger, as part of a package of regulations on Telecommunications on the island.

Resolution 105 “National Action Model for responding to cybersecurity incidents,” published in the Gaceta Oficial No. 92, comes one month after last July’s anti-government protests — articulated and disseminated largely through social networks —, which has generated criticism and suspicion about it.

However, the official Cubadebate website pointed out that it is about “the execution of what is established in Decree 360/2019, which has a preventive character and includes the whole of society,” and ensures that it “enables, based on duties and rights, the undifferentiated protection of citizens, civil society and state and private institutions of all kinds.”

Its objectives include, the publication added, “ensuring through the management of cybersecurity incidents, prevention, detection and timely response to possible enemy, criminal and harmful activities that may occur in cyberspace.”

“Under this new resolution, events that until now did not have legal support in the country on the internet, such as ethical and social damages or incidents of aggression,” the official information specified, according to which in the first category is “the media echo of fake news, understood as the dissemination of false news, offensive messages, defamation with an impact on the country’s prestige.”

For its part, it is considered as harmful dissemination “the dissemination through telecommunications/ICT infrastructures, platforms or services, of content that violates the constitutional, social and economic precepts of the state, incites mobilizations or other acts that alter the public order; spread messages that justify violence, accidents of any kind that affect the privacy and dignity of people.”

Similarly, it defines cyberterrorism, cyberwar, fraud and social subversion as “incidents of aggression” with a very high level of danger. Within the first, it includes “actions through the use of ICT whose purpose is to subvert the constitutional order, or to suppress or seriously destabilize the functioning of the political and mass institutions, the economic and social structures of the state, or to force the public powers to perform an act or refrain from doing so.”

Also “seriously disturb the public peace,” “seriously destabilize the functioning of an international organization” and “provoke a state of terror in the population or in a part of it.”

Cyberwar includes “unconventional warfare methods” and others to “justify political, economic, subversive actions or interference,” while considering fraud any “action that is contrary to truth and righteousness that harms people and institutions of the State.” Meanwhile, “wanting to alter public order” and “promoting social indiscipline” are considered part of “social subversion.”

Other categories typified by the new resolution, with their different subcategories and levels of danger, have to do with natural disasters, physical damage, incidents against dignity and individuality, illegal commercialization, technical and infrastructure failures, malicious programs, technical attacks or intrusion and compromise of information, among others.

Activists, opponents, unofficial organizations and Internet users fear that the new regulations will be applied at the discretion of the government and will serve to silence dissident voices on the networks and prosecute those who criticize the Cuban system and its leaders. In this sense, complaints and criticisms of the island’s authorities due to the new regulation have already started being published on the social networks.

In addition, in this Tuesday’s Gaceta Oficial other regulations were published that, according to the Ministry of Communications, “update” and “strengthen” Cuba’s legal body on these issues. Among these is Decree-Law No. 35 on “Telecommunications, Information and Communication Technologies and the Use of the Radioelectric Spectrum,” which establishes that “the Cuban state is the owner of public telecommunications services and has the power to regulate, order, control and supervise the different telecommunications/ICT services and networks; as well as granting the right to its exploitation,” Cubadebate pointed out.

Finally, the package includes a group of regulations on Information and Communication Technologies, the Radioelectric Spectrum, the use of Radiocommunication Services by Satellites and Interconnection, Access and Essential Installations of Telecommunication Networks.