Osorbo (37) allegedly committed several crimes on April 4, the day on which he “interfered in the action of the police,” MININT sources told the Cuban media. 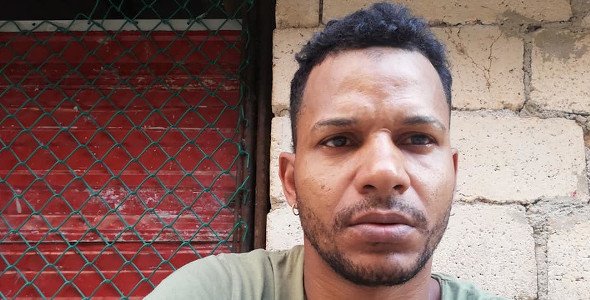 The Cuban Ministry of the Interior (MININT) confirmed that the opposition rapper and member of the San Isidro Movement (MSI), Maykel Castillo — known as Osorbo — is in provisional prison accused of “attack, public disorder and evasion of prisoners or detainees.”

Castillo, 37, allegedly committed these crimes on April 4, the day he “interfered in the action of the police,” MININT sources told the state Cubadebate website.

The Cuban authorities arrested Osorbo on May 18 and transferred him to the Pinar del Río provincial prison, west of Havana, on May 31, according to the digital media.

During this period “he has maintained telephone communication with his family, friends and his lawyer, especially with his wife,” says Cubadebate, which does not provide more details about the process or reveal the date or place of his foreseeable trial.

The MININT assures that in his case “the guarantees established in the Constitution and the Criminal Procedure Law have been fulfilled” and that “the terms of his arrest and capture were respected.” “The accusation was communicated to him, his family was notified of the arrest, he has maintained communication with them, he was made aware of the right to appoint a lawyer and he appeared in the process to exercise his defense,” says the note.

Opposition activists and organizations in recent days demanded the release of the singer, whom they consider a victim of repression by the Cuban government. They also claim that, contrary to what the authorities have now said, in his case the legally established procedures have been violated, and his arrest was “unjustified” and “arbitrary.”

According to the Spanish agency EFE, which cites relatives of the opposition rapper, in the weeks prior to his arrest, he was subjected to a police siege and was arrested for no apparent reason on several occasions. In addition, police patrols were posted in front of the place where he was staying in Old Havana.

Cubadebate, for its part, points out that “the accused has been previously prosecuted for the crimes of robbery with force, theft, contempt and attack.”

Osorbo is a co-interpreter with Yotuel Romero, Gente de Zona, Descemer Bueno and El Funky of “Patria y vida,” a critical issue with the Cuban government, made his by opponents inside and outside the Island and whose video has already exceeded 5.5 million views on YouTube.

Of the singers of this song, only Osorbo and El Funky reside in Cuba. The latter — whose name is Eliécer Márquez — has been subjected to house arrest and the writ of habeas corpus was denied, according to organizations opposed to the island’s authorities, which have not publicly made a statement on the matter.

In recent months, opposition groups have denounced repressive actions by the Cuban government against dissidents, especially against those linked to the artistic world. The case with the most media coverage has been that of artist and MSI leader Luis Manuel Otero Alcántara, recently discharged from a hospital in Havana, after a month in the hospital, according to his relatives, against his will.

Meanwhile, the Cuban government and official institutions and media deny the carrying out of repressive actions, whose publication on the networks they consider a “show” and accuse critical artists, opposition activists and independent journalists of carrying out subversive activities financed by the United States, as part of a campaign to discredit the island’s government and stage a “soft coup.”