Cubans suffer from a double blockade: the external one, caused by the U.S. financial and commercial embargo, and the internal one, derived from the reluctance of their leaders to modernize the economy and liberalize the private sector. 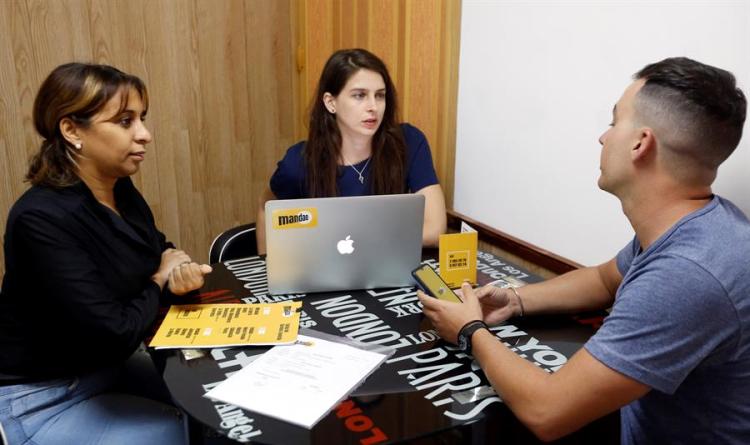 Marta Deus (c) talks with part of her “Negolution” work team, the only business magazine published on the island. Photo: Ernesto Mastrascusa / EFE.

Mobile Internet got to Cuba a year ago and, just as it happened a decade ago in the rest of the world, it has changed the day-to-day life of the people. Aware of this, young entrepreneurs have rushed to replicate on the island the most popular services and applications from abroad.

Cubans suffer from a double blockade: the external one, caused by the U.S. financial and commercial embargo, and the internal one, derived from the reluctance of their leaders to modernize the economy and liberalize the private sector. The delay in the arrival of the Internet is attributed to both―the first Wi-Fi points date from 2015―and, as a consequence, the inexistence of transportation or messaging applications. Until now.

A year ago, on the same week in which 3G arrived, four young graduates―two engineers, a graphic designer and a graduate in tourism―began working on an application identical to Uber.

“We found a map, we started studying design, programming and marketing. Then we started the idea, we developed the app from scratch and launched it in December of last year,” explained to EFE Claudia Cuevas, one of the architects of the Sube application, which now has more than 6,000 users and 70 drivers.

The newly created “startup” had as its first headquarters a park in the central Havana neighborhood of Vedado, as it had a Wi-Fi connection point. And after months of hard work only interrupted by storms and other weather conditions, the success of the application has provided them with a space in the neighborhood of Centro Habana, where they have a modern and spacious office for the eight professionals who already make up the team.

They also have competition: the Bajanda application, created by another group of young entrepreneurs. Both are replicas of Uber adapted to the reality of Cuba, a country where the use of debit cards is still marginal, connection is unstable in some areas and a large part of the vehicles are over 40 years old.

Thus, the economic route in Bajanda can be aboard a Soviet car from the 1980s without a seat belt, while the “premium” options include modern vehicles and the emblematic classic cars that take tourists on tours through Havana.

Projects like these can be the seed of a shift of paradigm for Cuban youth. Looking for a better future in another country has so far been the desire of many university students, who barely saw opportunities at home, but this is beginning to change.

“There’s much to be done in Cuba, many ways to explore with the knowledge that Cuban youth have: we are constantly studying, we have no barriers or brakes, we are always thinking about what to do to improve economically and in terms of professional development,” says the co-founder of Sube.

If there’s an entrepreneur guru in Cuba that is Marta Deus. Born in Havana and trained in Madrid, this 31-year-old businesswoman runs Negolution, the only business magazine published on the island, and she has a consultancy that provides services to private or “self-employed” workers in the arduous task of starting up and maintaining their projects.

“In 2013 there was an opening in private businesses and we decided to do something, provide services to other private enterprises that were being born,” explains the businesswoman, who recently launched Mandao, a new courier and food delivery service in Havana inspired by the Uber Eats and Glovo platforms.

Today more than 1.4 million Cubans work in the private sector, one third of the country’s workforce, and 610,000 of them are “self-employed,” a sector born a decade ago when former Cuban President Raúl Castro was forced to update the socialist model of the island and reduce the bulky payrolls of the state sector.

Thus, after decades of centralized economy, entrepreneurs went from being little more than villains to a necessary evil, and today they represent an important driving force for the development of the country, as well as a source of inspiration for the new generations in their search for professional success and material progress.

Despite the gradual openings in recent years, Cuban entrepreneurs continue to face more problems than their counterparts in any other country: “It is very complex to maintain a business, because you live in a state of great uncertainty. Suddenly we have more U.S. sanctions, and here the regulatory changes are constant: today you have one regulation but tomorrow you have another one,” Deus regrets.

In addition, the businesswoman explains, “in Cuba we have a limitation. It is not that you can come up with a business idea and you can do it, since your business idea has to be adapted to the 120 licenses approved by the self-employment law.”

Therefore, she points out, “most of the ventures in Cuba are restaurants and house rentals, because that is what can be done. Otherwise, more business in technology and applications would arise.”

Although they don’t have an employer―something still unthinkable on the island―Cuban businesspeople have had the opportunity to meet with government representatives to convey a clear demand: that the prohibited activities be specified and the rest be allowed.

They believe that this legal advance, together with the talent and energy of Cubans, would allow the spreading of the wings of the still unfulfilled dreams of prosperity the country and its entrepreneurs are postponing.