On the island, where feminicide is not typified in the criminal code and there is no yellow press, awareness of gender crimes has coincided with greater access to the Internet. 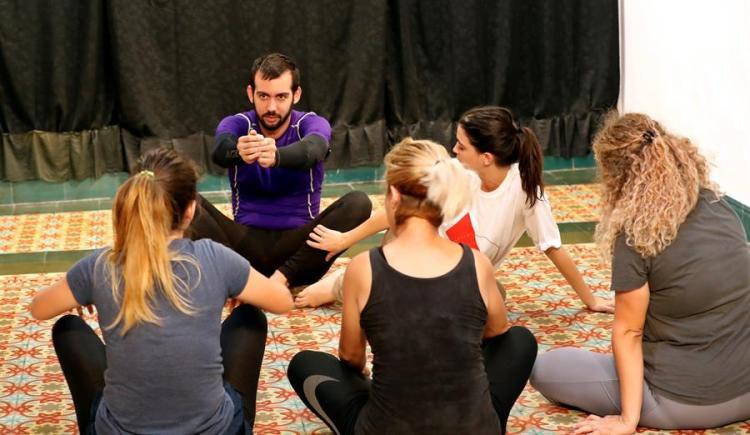 The change begins by taking off jewelry, makeup and everything that hinders you to fight. “We ask the young women to even cut their fingernails,” explains Elena Molina, one of the organizers of a jiu-jitsu workshop to “empower” women in imminent situations of rape.

Then, ready to “roll on the floor,” about 20 participants in the course begin the true process of transformation, which goes from the physical to the mental: learning that defending and hitting an aggressor is not “a bad thing” and convincing themselves that they can face a stronger person trying to overpower them.

“It’s about a paradigm shift and building the confidence that you can be prepared for a difficult situation,” adds Fabiana Salgado, the other half of the duo behind Arthaus, an autonomous creative space, dedicated mainly to art and now hosting this initiative, unprecedented in Cuba.

Be prepared for the worst

The images are eloquent. Javier Peña, the professor of “Jiu-jitsu against Rape,” shows them on the cell phone to those who still doubt that a woman can overpower an attacker.

Two different girls keep two aggressors immobilized on the floor, struggling to get away without achieving it. The two practice Brazilian jiu-jitsu or BJJ.

The idea of ​​teaching techniques and training women with an “effective guide” to stop a possible sexual assault was in Peña’s mind for months. According to him, it is not about neutralizing the aggressor, but about gaining time and getting out of dangers way.

“It’s about empowerment, that at any given time you can defend yourself, protect yourself from an extreme situation. It is not ideal to reach it, but if you are there, what do you do? Repond,” emphasizes the former athlete, with more than 18 years of experience.

As a self-defense system that does not use force but works with the functioning of the body, jiu-jitsu―in this case the BBJ No-gi or without kimono―comes in handy for classes, divided into three sessions with practical solutions like what to do when an aggressor tries to force you on the floor or attacks you from behind.

The reaction of the students when facing this sport for the first time is one of the things that satisfies Peña. “It is impressive when you give the first explanations, sees disbelief in their faces, of ‘I won’t be able to do this,’ and then you see that they are completing the movements. It’s about building confidence,” he explains.

“It feels very good to go from a situation of vulnerability, in which someone is trying to get between your legs to rape you, to take control and be able to strangle him,” insists Peña, who warns that they don’t “encourage violence for the sake of violence, but there are times when you have to defend yourself.”

A house for artists…and martial arts

With its high ceiling, tiles with designs, spacious rooms and its air from another era, the Arthaus house does not differ at first sight from its neighbors in the centrally located San Lazaro Street, in Havana. Like most buildings in the city, its years of glory can still be seen among the traces of time. Inside, the story is another.

“This is my grandmother’s house, my mother, who is an art curator, and I lived here. With Fabiana, we decided to activate a creation space focused mainly on experimentation within art,” Molina explains to EFE in the large room stripped of furniture and now converted into an improvised dojo.

Arthaus has been operating since 2016, but it was not until the Havana Art Biennial last April that it hosted its first artistic residence. Films, plastic exhibitions and theatrical writing experiences have also been presented at the house on San Lázaro.

The workshop “Jiu-jitsu against Rape” is the first thing Salgado and Molina organize that’s not directly related to art. “We do this because we are women, because I know women who have been in situations of sexual harassment and we are interested in supporting women’s empowerment initiatives,” says Fabiana Salgado.

They are still not sure if they will repeat, but at Arthaus they are happy with the reception of this first edition, shown in the number of people who are interested, an indication that “something is moving.”

“Perhaps there isn’t a general state of fear in the street, but I do believe there is evidence that things are happening on the street. That this is recognized and that there are people who want to put their knowledge to help, are proof that yes, there is an awareness,” reflects Salgado.

Feminist awakening on the networks

On the island, where feminicide is not typified in the criminal code and there is no yellow press, awareness of gender crimes has coincided with greater access to the Internet. The arrival of the Internet on cell phones has driven the solidification of an activism that still has a long way to go.

Compared to other Latin American nations that have much more chilling histories of violence, Cuba is a safe country. However, that you can walk the streets late at night and there are no continuous reports of deaths, does not mean that there are no cases of women being raped, robbed or murdered.

Thanks to the denunciations on Facebook and Twitter, the “crimes of passion” have become defined as femicides and documented as gender crimes by activists who fill the gaps that the Cuban government has not yet covered.

Also from the networks, independent platforms such as “Yo sí te creo en Cuba” extend support to victims and educate on different issues, including harassment at work and school.

The Cuban Campaign for Nonviolence towards Women and Girls, promoted by the Oscar Arnulfo Romero Center in partnership with official institutions such as the Federation of Cuban Women, is a welcome addition to the Cuban feminist cyberspace.

Under the slogan “Evolve. Harassment makes you live in the past,” the campaign shares reports, recommends events, informs and publishes guides on how to behave in the face of an aggression.

Recently, some 40 women went to the National Assembly so it would include in the legislative update schedule a comprehensive law against gender violence, whose discussion could open before the deadline in 2028 to reform Cuban laws and approve new ones.