A delegation of politicians and agricultural businessmen from that U.S. state is visiting the island, at a time when the Trump administration has minimized bilateral relations. 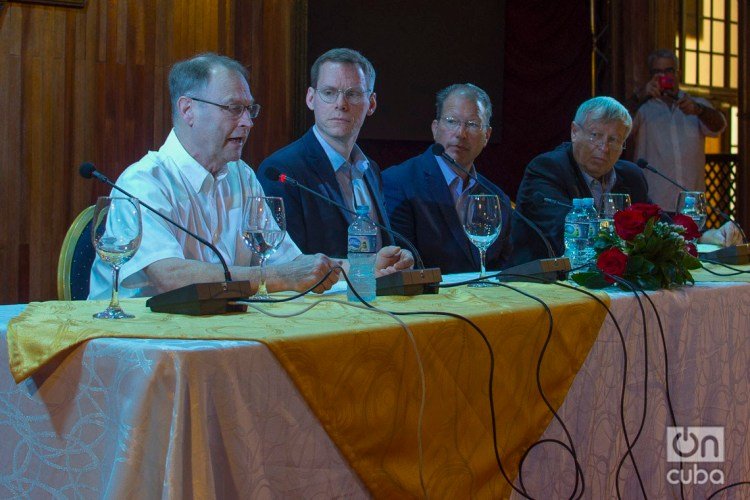 Press conference of the delegation of businessmen and politicians from Michigan visiting Cuba, at the Hotel Nacional, in Havana, on February 6, 2020. From left to right, Gary McDowell, Director of the state’s Department of Agriculture; Chuck Lippstreu, current president of the Michigan Agri-Business Association (MABA); state Senator Daniel Lauwers; and James E. Byrum, outgoing president of the MABA. Photo: Otmaro Rodríguez.

Even when relations between Cuba and the United States are experiencing a marked setback since the arrival of Donald Trump to the White House, the interest in maintaining and even fostering relations with the island remains on the agenda of various sectors of U.S. society.

One of the most persevering, even against the policy of the Trump administration, is the agricultural sector, which sees business opportunities go to waste just 90 miles from U.S. territory due to embargo regulations, and has bid for approval of laws that benefit export and trade with Cuba.

And although at the country level the links are very limited and there are still barriers such as the impossibility of selling to the island agricultural products on credit, there are several U.S. states that insist on maintaining contacts with the Cuban authorities and producers, both to find niches in the current state of bilateral relations as well as for a possible future scenario of normalization of relations.

This is the case of Michigan. A delegation of politicians and agricultural businessmen has arrived in Cuba from that U.S. state―the latter led by Chuck Lippstreu, current president of the Michigan Agri-Business Association (MABA)―to strengthen years of ties, even during times of ups and downs, and dialogue with their Cuban counterparts about future opportunities.

For this they have met with officials, farmers and leaders of agricultural cooperatives, “not only to talk about what we can contribute, but also to learn from agriculture and other associated sectors in Cuba,” said Gary McDowell, director of the state’s Department of Agriculture, for whom the visit has been “a tremendous learning experience” and who thanked his Cuban counterparts for the fruitfulness of the meetings and the hospitality received.

McDowell is already the third official in his position to travel to the island and hold meetings with Cuban representatives, a sign of the longstanding relations between Cuba and Michigan, a U.S. state recognized for the leadership and diversity of its agricultural industry and, in particular, for the production of healthy and high-quality food.

In earlier times, products such as beans and turkey meat arrived in Cuba, but two years ago, in the midst of the slowdown imposed by the Trump administration, these exports were interrupted. And although there is no roadmap defined for its restart, the meetings held have now reactivated the will in this direction.

“As director of agriculture, I am committed to continue building a solid relationship with Cuba and lay the foundations for a commercial exchange that benefits both countries,” McDowell said at a press conference held this Thursday at the Hotel Nacional in Havana.

More emphatic was outgoing president of MABA James E. Byrum, a man who has worked for four decades to increase ties between the two countries and, in particular, between Michigan and Cuba.

“That’s why we’re here,” he said about possible future commercial exchanges with the island, and said that the intention is not that they be one way, but also, when conditions permit, from Cuba to the United States.

Byrum pondered the quality of internationally recognized Cuban products such as rum and tobacco, and saw other opportunities “in which we can learn from each other.” That, he told OnCuba, could be a next step between his state and the island.

“Now we are focused on trade, but beyond that there are opportunities that could be very beneficial, in terms of agricultural research, to collaboration between educational and research centers, between universities, not only on agronomy but on several issues. Also exchanges between both peoples, between artists and people of culture, even in sports,” said Byrum, who said he was convinced that “a long journey begins with the first step.”

“That’s what we’re doing,” he confirmed.

1. Press conference of the delegation of businessmen and politicians from Michigan, visiting Cuba, at the Hotel Nacional, in Havana, on February 6, 2020. Photo: Otmaro Rodríguez.

2. Press conference of the delegation of businessmen and politicians from Michigan, visiting Cuba, at the Hotel Nacional, in Havana, on February 6, 2020. Photo: Otmaro Rodríguez.

His successor, Chuck Lippstreu, reaffirmed that “an increase in agricultural trade and contacts between the United States and Cuba would be beneficial for both peoples” and listed products such as beans, potatoes, meat, dairy products and vegetables, which could reach Cuban tables thanks to the farmers in his state.

But, like Byrum, he argues that both sides can go one step further, for the benefit not only of the farmers and industry of Michigan and Cuba, but of all their people.

“It is not only about agricultural exports, but the ability to find opportunities to market other products, to establish other types of exchanges and collaborations that help advance bilateral relations and favor both peoples,” he said.

For his part, Daniel Lauwers, second head of the Republican bench in the state Senate and farmer himself, stressed that in the midst of the “frank and productive” talks held this week with Cuban authorities, about relations between Cuba and the United States, both parties decided to focus on “a series of opportunities in which we can collaborate,” despite the existing differences and regulations.

“We know there are possibilities for developing trade relations, that Cuba imports 2 billion dollars in food and about one eighth of that figure is from the United States. The Cuban market is small, but growing, and we must improve our performance in it for the benefit of both,” said Lauwers, who believes that the current context, in which Washington has signed or is negotiating new trade agreements with several countries, could be conducive to redesigning economic ties with the island.

“To be able to boost relations, we have to start with dialogues that help us learn from each other the paths along which we can walk. And in that sense, this has been a successful week, and I hope we can continue with these talks and carry out our collaboration in the future,” he concluded.

TN: Quotes from U.S. delegation participants were retranslated from the Spanish.